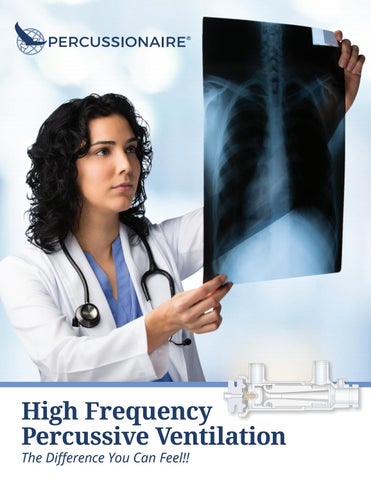 High Frequency Percussive Ventilation The Difference You Can Feel!!

Airway Clearance and Lung Rehabilitation 1 1. Compromised alveoli are swollen and filled with mucus and other debris.

3 3. High frequency, percussive pulses and a dense aerosol mist are delivered into the lungs during therapeutic percussion, which serves to reduce the adhesive and cohesive forces of retained airway secretions.

Lung recruitment with TRUE-IPV® gently “persuades” distal airways and collapsed alveoli to open over time. This keeps the recruited lung open and functioning while atelectasis, infection, inflammation and injury are healed. 2

Improve FRC TRUE-IPV® Therapy uses the unique ® as a “clutch” mechanism PHASITRON to protect the lung from overpressure. These high frequency percussive pulses delivered by the Phasitron® 5 ramify throughout the airways and alveolar ducts and augment diffusive ventilation in the gas exchange regions of the lung, allowing improved FRC, CO2 removal, airway clearance and lung recruitment.

5 5. An improving alveolus can be a direct result of High Frequency Percussive Ventilation using the Phasitron® 5, a proven, evidence based therapy making it the safest therapy for the most fragile lungs.

TRUE-IPV®, using the PHASITRON ® , can be performed either invasively through an artificial airway or non-invasively by mouthpiece or mask. PHASITRON®

The Bronchotron® Transport gives clinicians a practical and extremely portable option for High Frequency Percussive Ventilation in most patient populations. This pneumatic device can operate with a single oxygen cylinder, or from a standard high flow blender. It does not depend on electrical power and has built-in alarms and monitoring display. Display metrics: Pulse Frequency Rate, Mean Airway Pressure, Dynamic Pressure (AIP) and (AEP), Usage Timer, Pulse Amplitude Bar Graph.

Superior Transport Technology The unique characteristics of the Bronchotron® Transport Ventilator with the Phasitron® delivers High Frequency Percussive Ventilation via entirely pneumatic controls, which makes it suited for air or ground transport. This technology has the proven track record of safely transporting thousands of critical patients worldwide.

Improves airway clearance (removal of meconium) May be used non-invasively, particularly in the NICU

Airway Clearance &amp; Lung Expansion Therapy Optimized for hospital and outpatient therapeutic care bringing the benefits of TRUE-IPV速 into the ICU and NICU.

The (Impulsator®) Travel Air® allows patients to benefit from airway clearance therapy at home. Proven safe and effective, the new Travel Air® delivers the same TRUE-IPV®, using the Phasitron® 5, as the Percussionaire® hospital devices. This self-contained device is easy to use, and is suitable for adult and pediatric patients. Approved 510(k) Pending

Therapy for all patients Designed specifically for home care and outpatient clinics, allowing patients to benefit from airway clearance and lung rehabilitation at home. Proven safe and effective for over 30 years

TRUE-IPV®, using the Phasitron® 5, is the foremost remover of airway mucus and debris. Flow from the Phasitron® delivers pulsatile flow that gently dislodges debris and secretions to be carried out by exiting air flow.

TRUE-IPV® The Difference You Can Feel!!

The information and images in this brochure are subject to change without notice.