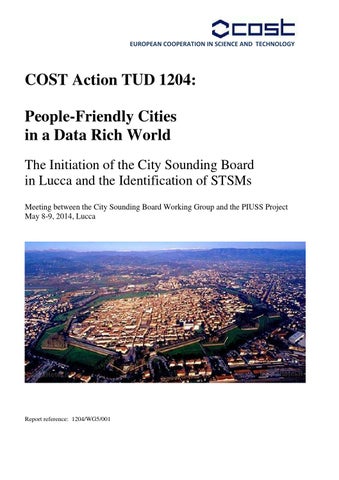 EUROPEAN COOPERATION IN SCIENCE AND TECHNOLOGY

Welcome to the first briefing note for the City Sounding Board, part of the COST Action TUD1204 – People-Friendly Cities in a Data Rich World. Lucca is one of the Reference Cities for COST Action and it is the first Reference City that we have had formal/informal relations with and to which we have organized a City and site visit. The visit to Lucca took place on May 8th and 9th. The meeting on the first day was in a small converted church, at which the senior architect and City Officials presented the PIUSS project. The PIUSS project consists of a number of interventions, both public and private, aimed towards economic development via recovery interventions, upgrading, re-conversation and the valorization of urban heritage in the southwest of the old town centre. The afternoon was spent discussing how our COST project can interface with the PIUSS project and with the City. On the second morning we met in the Municipal offices, and from there went on a walking tour which included a full site visit to the proposed regeneration area. This area consists of a 19th and 20th century industrial complex overlain on monastic buildings from previous centuries. A wonderful openness and a shared sense of engagement was clearly evident on the part of the PUISS project members. Throughout the twoday meeting, these individuals gave generously of their time and energy to share their experiences of not only the PUISS project, but also the city of Lucca at large. What was most striking was their passion and respect for the city and its citizens. One of the architects involved in the PIUSS project went so far as to wish WG members to ‘get lost in Lucca’ as the only way to fully see and experience the city –

‘always get lost here; you will always find something to admire’.

‘The change isn’t the city of Lucca; the change is Italy. Lucca is an example of a changing Italy’.

Lucca and first impressions To the first time visitor, Lucca makes a very positive impression. It has wonderful urban qualities and is one of the most walkable and attractive small cities in Europe. Within the highly legible urban island of the walled city, you will find a unique organic street pattern linking dozens of piazzas at varied scales. While the piazzas have a legible hierarchy, the streets tend to be 5/6 metres wide , are paved in wall to wall stone flagging, and in effect operate as shared space between pedestrians, cyclists, and the slow moving cars and delivery vehicles which need to serve the shops, hotels and restaurants. The building form is traditional Italian, frequently narrow fronted vertical buildings, rising to 5 or 6 stories, and containing the space of the street. There is a great harmony in texture and colour of building materials and one is struck by the extent of independent shops beautifully presented, and framed by historic fabric including the crafted metal fan-work above the shop-front, which continually catches the eye.

city of Lucca is like a book; sometimes, when you open it, the pages are stuck together – because it is an old book. But, when you take the time to pry them open, you will find wonderful things’.

The PUISS Project The PIUSS project is a successful application for EU Structural Funds, 24 million, plus an additional 16 million euro to be provided from the region/province/city. The PIUSS project; will consist of the front-loading of a range of cultural and civic infrastructure to include the following:  New Public Spaces: The re-shaping of the manner in which tourists/visitors arrive in Lucca, and the integration of this arrival space with a new system of urban squares, both external and covered, sensitively created from the disused industrial ‘tobacco district’  New Public Facilities:[a] Adaption of structures for productive and artistic activities of the ‘Teatro del Giglio’, [b] the creation of a Centre of social services[multi-functional hall equipped with wired services and workstations, [c] a Comic Strip Museum to include a drawing workshop and an exhibition hall.[Lucca has a vibrant comic-strip industry with an annual festival attracting 400, 000, during November.  Public- Private Synergy and Leverage; [a]Centre of excellence for arts and entertainment, and for vocational training in the activities of choreography,[b] Centre for Technology Transfer working with institutions of Higher Education. [c]Business incubators related to cultural heritage management. Lucca and City Challenges Despite the positive initial impressions, the WG5 members were briefed on some serious issues which the City faces:  Urban Decline: It was stated that some parts of the City are dying. Only a few metres from World Heritage landscape, you find ghost areas that can’t be accessed. The historic city of Lucca needs to adjust for modern needs. PIUSS is the first step in this adjustment.  Tourism Profile: Up to 60 tour buses deliver day- trippers to Lucca on a daily basis. This very short-term relationship has only a limited benefit for both City and visitor. Longer-term residential stays need to be promoted, relating tourism to urban identity.  Inside-Outside: There are major differences between Lucca inside the walls and Lucca outside the walls. Understanding and successfully interfacing this relationship is a major challenge.  The PIUSS project , due to the criteria for European funding , will focus on the front-loading of cultural and civic infrastructure. It will not include residential and office/commercial content. These latter uses, necessary for mixed-use urbanism, will have to come from a successful marketing drive for private investment in Phase 2.  Citizen mindset: There is a constant challenge to successfully communicate the proposed changes. Despite an extensive process of facilitated citizen engagement, some stakeholders remain quiet during consultation, yet make strong negative submissions late in the process. Also the fact that different agencies/institutions sometimes have their base outside the City/Region e.g. regulatory aspects of conservation sit under the Ministry of Culture in Rome, tends to create fragmentation among the community of stakeholders.

‘It is a question of vitality; there’s an imbalance between city sections – it is therefore important to equalize the use of different spaces’.

Outcomes and Actions from WG 5 meeting in Lucca We were made welcome in Lucca by the Lord mayor, City Administration, and the project leaders of the PIUSS initiative. The City is open to hosting future meetings. It is proposed that 5 STSMs, funded in year two, be undertaken. The establishment of a City Sounding Board was also supported. STSMs 5 STSMs proposed intend to investigate how a citizen-focused approach with a digital age can:  Explore the relationship between the old Inner City of Lucca [between the walls] and the City of Lucca [outside the walls].  Explore the relationship between Phase 1 of the PIUSS project [20%] and the more commercial subsequent phases.  Provide an understanding of the urban space network of Lucca, the hard paved spaces ie the routes and piazzas, and the green park spaces. Explain how the new spaces in PIUSS [both external and covered] will relate to this network.  Provide an understanding and document what happened in terms of public engagement in the PIUSS project  Explain the cultural context and group dynamics of why public engagement happened the way it did.

‘If you want to change things where there is a historical heritage, you have to transform and work to solve problems – it is an issue of harmony’.

City Sounding Board It was agreed the City Sounding Board in Lucca would consist of 50 people and would aim to include representatives of the following broad categories: Citizens Diversity in gender, age and ability Ethnic/Cultural Family NGOs, Community, Volunteers Inside/Outside City Walls Excluded/ Marginalized Students

Social Bodies/Agencies with a brief/mission to deliver social equity

‘Main strategy is not to redesign city but to re-open the city to enable citizens and businesses to use the space’.

Culture, character and historical context are at the forefront of the PIUSS project â&#x20AC;&#x201C; that the architects and city planners involved in the PIUSS project are key catalysts in harmonizing these three components, while aiming to modernize areas of the inner city that have fallen into disuse is a testament to their commitment to the city and the citizens of Lucca. Seeking to harmonize and balance the overall character/historical element of a city with the need to be modern goes to the heart of this COST Action; as a reference city, Lucca is well-positioned in this respect. Meeting between the City Sounding Board Working Group and the PIUSS Project May 8-9, 2014, Lucca

Meeting between the City Sounding Board Working Group and the PIUSS Project May 8-9, 2014, Lucca