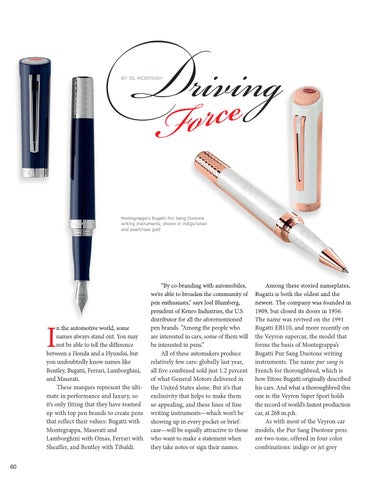 n the automotive world, some names always stand out. You may not be able to tell the difference between a Honda and a Hyundai, but you undoubtedly know names like Bentley, Bugatti, Ferrari, Lamborghini, and Maserati. These marques represent the ultimate in performance and luxury, so it’s only fitting that they have teamed up with top pen brands to create pens that reflect their values: Bugatti with Montegrappa, Maserati and Lamborghini with Omas, Ferrari with Sheaffer, and Bentley with Tibaldi.

“By co-branding with automobiles, we’re able to broaden the community of pen enthusiasts,” says Joel Blumberg, president of Kenro Industries, the U.S. distributor for all the aforementioned pen brands. “Among the people who are interested in cars, some of them will be interested in pens.” All of these automakers produce relatively few cars: globally last year, all five combined sold just 1.2 percent of what General Motors delivered in the United States alone. But it’s that exclusivity that helps to make them so appealing, and these lines of fine writing instruments—which won’t be showing up in every pocket or briefcase—will be equally attractive to those who want to make a statement when they take notes or sign their names.

Among these storied nameplates, Bugatti is both the oldest and the newest. The company was founded in 1909, but closed its doors in 1956. The name was revived on the 1991 Bugatti EB110, and more recently on the Veyron supercar, the model that forms the basis of Montegrappa’s Bugatti Pur Sang Duotone writing instruments. The name pur sang is French for thoroughbred, which is how Ettore Bugatti originally described his cars. And what a thoroughbred this one is: the Veyron Super Sport holds the record of world’s fastest production car, at 268 m.p.h. As with most of the Veyron car models, the Pur Sang Duotone pens are two-tone, offered in four color combinations: indigo or jet grey 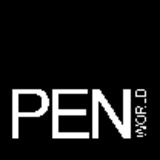