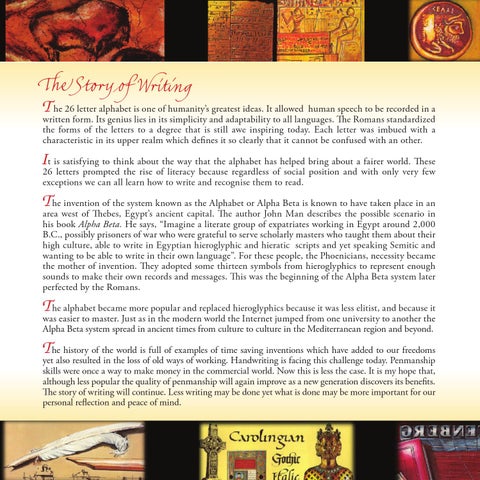 The Story of Writing

The 26 letter alphabet is one of humanity’s greatest ideas. It allowed human speech to be recorded in a

written form. Its genius lies in its simplicity and adaptability to all languages. The Romans standardized the forms of the letters to a degree that is still awe inspiring today. Each letter was imbued with a characteristic in its upper realm which defines it so clearly that it cannot be confused with an other.

It is satisfying to think about the way that the alphabet has helped bring about a fairer world. These 26 letters prompted the rise of literacy because regardless of social position and with only very few exceptions we can all learn how to write and recognise them to read.

area west of Thebes, Egypt’s ancient capital. The author John Man describes the possible scenario in his book Alpha Beta. He says, “Imagine a literate group of expatriates working in Egypt around 2,000 B.C., possibly prisoners of war who were grateful to serve scholarly masters who taught them about their high culture, able to write in Egyptian hieroglyphic and hieratic scripts and yet speaking Semitic and wanting to be able to write in their own language”. For these people, the Phoenicians, necessity became the mother of invention. They adopted some thirteen symbols from hieroglyphics to represent enough sounds to make their own records and messages. This was the beginning of the Alpha Beta system later perfected by the Romans.

The alphabet became more popular and replaced hieroglyphics because it was less elitist, and because it was easier to master. Just as in the modern world the Internet jumped from one university to another the Alpha Beta system spread in ancient times from culture to culture in the Mediterranean region and beyond.

yet also resulted in the loss of old ways of working. Handwriting is facing this challenge today. Penmanship skills were once a way to make money in the commercial world. Now this is less the case. It is my hope that, although less popular the quality of penmanship will again improve as a new generation discovers its benefits. The story of writing will continue. Less writing may be done yet what is done may be more important for our personal reflection and peace of mind.

Discover the Secrets to Penmanship. The art of handwriting is both aesthetically pleasing and improves cognitive function and memory. 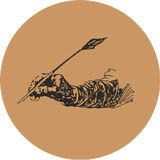