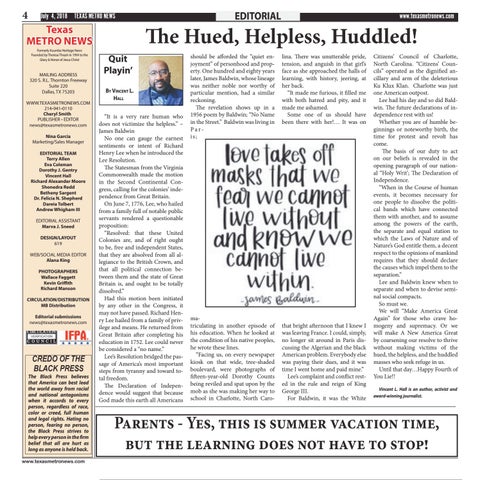 The Black Press believes that America can best lead the world away from racial and national antagonisms when it accords to every person, regardless of race, color or creed, full human and legal rights. Hating no person, fearing no person, the Black Press strives to help every person in the firm belief that all are hurt as long as anyone is held back. www.texasmetronews.com

Quit Playinâ&#x20AC;&#x2122; By Vincent L. Hall â&#x20AC;&#x153;It is a very rare human who does not victimize the helpless.â&#x20AC;?Â â&#x20AC;&#x201C; James Baldwin No one can gauge the earnest sentiments or intent of Richard Henry Lee when he introduced the Lee Resolution. The Statesman from the Virginia Commonwealth made the motion in the Second Continental Congress, calling for the coloniesâ&#x20AC;&#x2122; independence from Great Britain. On June 7, 1776, Lee, who hailed from a family full of notable public servants rendered a questionable proposition: â&#x20AC;&#x153;Resolved: that these United Colonies are, and of right ought to be, free and independent States, that they are absolved from all allegiance to the British Crown, and that all political connection between them and the state of Great Britain is, and ought to be totally dissolved.â&#x20AC;? Had this motion been initiated by any other in the Congress, it may not have passed. Richard Henry Lee hailed from a family of privilege and means. He returned from Great Britain after completing his education in 1752. Lee could never be considered a â&#x20AC;&#x153;no name.â&#x20AC;? Leeâ&#x20AC;&#x2122;s Resolution bridged the passage of Americaâ&#x20AC;&#x2122;s most important steps from tyranny and toward total freedom. The Declaration of Independence would suggest that because God made this earth all Americans

should be afforded the â&#x20AC;&#x153;quiet enjoymentâ&#x20AC;? of personhood and property. One hundred and eighty years later, James Baldwin, whose lineage was neither noble nor worthy of particular mention, had a similar reckoning. The revelation shows up in a 1956 poem by Baldwin; â&#x20AC;&#x153;No Name in the Street.â&#x20AC;? Baldwin was living in Paris;

matriculating in another episode of his education. When he looked at the condition of his native peoples, he wrote these lines. â&#x20AC;&#x153;Facing us, on every newspaper kiosk on that wide, tree-shaded boulevard, were photographs of fifteen-year-old Dorothy Counts being reviled and spat upon by the mob as she was making her way to school in Charlotte, North Caro-

lina. There was unutterable pride, tension, and anguish in that girlâ&#x20AC;&#x2122;s face as she approached the halls of learning, with history, jeering, at her back. â&#x20AC;&#x153;It made me furious, it filled me with both hatred and pity, and it made me ashamed. Some one of us should have been there with her!â&#x20AC;Ś It was on

that bright afternoon that I knew I was leaving France. I could, simply, no longer sit around in Paris discussing the Algerian and the black American problem. Everybody else was paying their dues, and it was time I went home and paid mine.â&#x20AC;? Leeâ&#x20AC;&#x2122;s complaint and conflict rested in the rule and reign of King George III. For Baldwin, it was the White

Citizensâ&#x20AC;&#x2122; Council of Charlotte, North Carolina. â&#x20AC;&#x153;Citizensâ&#x20AC;&#x2122; Councilsâ&#x20AC;? operated as the dignified ancillary and arm of the deleterious Ku Klux Klan. Charlotte was just one American outpost. Lee had his day and so did Baldwin. The future declarations of independence rest with us! Whether you are of humble beginnings or noteworthy birth, the time for protest and revolt has come. The basis of our duty to act on our beliefs is revealed in the opening paragraph of our national â&#x20AC;&#x153;Holy Writâ&#x20AC;&#x2122;; The Declaration of Independence. â&#x20AC;&#x153;When in the Course of human events, it becomes necessary for one people to dissolve the political bands which have connected them with another, and to assume among the powers of the earth, the separate and equal station to which the Laws of Nature and of Natureâ&#x20AC;&#x2122;s God entitle them, a decent respect to the opinions of mankind requires that they should declare the causes which impel them to the separation.â&#x20AC;? Lee and Baldwin knew when to separate and when to devise seminal social compacts. So must we. We will â&#x20AC;&#x153;Make America Great Againâ&#x20AC;? for those who crave homogeny and supremacy. Or we will make A New America Great by coarsening our resolve to thrive without making victims of the hued, the helpless, and the huddled masses who seek refuge in us. Until that dayâ&#x20AC;ŚHappy Fourth of You Lie!! Vincent L. Hall is an author, activist and award-winning journalist.

Parents - Yes, this is summer vacation time, but the learning does not have to stop! 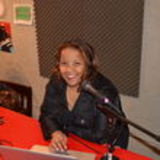