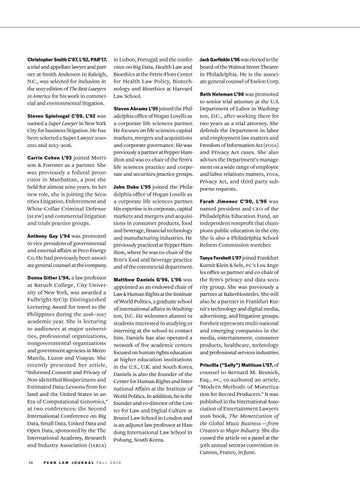 a trial and appellate lawyer and partner at Smith Anderson in Raleigh, N.C., was selected for inclusion in the 2017 edition of The Best Lawyers in America for his work in commercial and environmental litigation. Steven Spielvogel C’89, L’92 was

son &amp; Foerster as a partner. She was previously a federal prosecutor in Manhattan, a post she held for almost nine years. In her new role, she is joining the Securities Litigation, Enforcement and White-Collar Criminal Defense (SLEW) and commercial litigation and trials practice groups. Anthony Gay L’94 was promoted

to vice president of governmental and external affairs at Peco Energy Co. He had previously been associate general counsel at the company. Donna Gitter L’94, a law professor at Baruch College, City University of New York, was awarded a Fulbright-SyCip Distinguished Lecturing Award for travel to the Philippines during the 2016–2017 academic year. She is lecturing to audiences at major universities, professional organizations, nongovernmental organizations and government agencies in Metro Manila, Luzon and Visayas. She recently presented her article, “Informed Consent and Privacy of Non-identified Biospecimens and Estimated Data: Lessons from Iceland and the United States in an Era of Computational Genomics,” at two conferences: the Second International Conference on Big Data, Small Data, Linked Data and Open Data, sponsored by the The International Academy, Research and Industry Association (IARIA)

in Lisbon, Portugal; and the conference on Big Data, Health Law and Bioethics at the Petrie-Flom Center for Health Law Policy, Biotechnology and Bioethics at Harvard Law School. Steven Abrams L’95 joined the Philadelphia office of Hogan Lovells as a corporate life sciences partner. He focuses on life sciences capital markets, mergers and acquisitions and corporate governance. He was previously a partner at Pepper Hamilton and was co-chair of the firm’s life sciences practice and corporate and securities practice groups. John Duke L’95 joined the Phila-

delphia office of Hogan Lovells as a corporate life sciences partner. His expertise is in corporate, capital markets and mergers and acquisitions in consumer products, food and beverage, financial technology and manufacturing industries. He previously practiced at Pepper Hamilton, where he was co-chair of the firm’s food and beverage practice and of the commercial department.

Jack Garfinkle L’96 was elected to the

board of the Walnut Street Theatre in Philadelphia. He is the associate general counsel of Exelon Corp. Beth Heleman L’96 was promoted to senior trial attorney at the U.S. Department of Labor in Washington, D.C., after working there for two years as a trial attorney. She defends the Department in labor and employment law matters and Freedom of Information Act (FOIA) and Privacy Act cases. She also advises the Department’s management on a wide range of employee and labor relations matters, FOIA, Privacy Act, and third party subpoena requests. Farah Jimenez C’90, L’96 was named president and CEO of the Philadelphia Education Fund, an independent nonprofit that champions public education in the city. She is also a Philadelphia School Reform Commission member. Tanya Forsheit L’97 joined Frankfurt

Kurnit Klein &amp; Selz, PC’s Los Angeles office as partner and co-chair of the firm’s privacy and data security group. She was previously a partner at BakerHostetler. She will also be a partner in Frankfurt Kurnit’s technology and digital media, advertising, and litigation groups. Forsheit represents multi-national and emerging companies in the media, entertainment, consumer products, healthcare, technology and professional services industries.

Matthew Daniels G’96, L’96 was appointed as an endowed chair of Law &amp; Human Rights at the Institute of World Politics, a graduate school of international affairs in Washington, D.C. He welcomes alumni or students interested in studying or interning at the school to contact him. Daniels has also operated a network of five academic centers focused on human rights education at higher education institutions in the U.S., U.K. and South Korea. Priscilla (“Sally”) Mattison L’97, of Daniels is also the founder of the counsel to Bernard M. Resnick, Center for Human Rights and Inter- Esq., PC, co-authored an article, national Affairs at the Institute of “Modern Methods of MonetizaWorld Politics. In addition, he is the tion for Record Producers.” It was founder and co-director of the Cen- published in the International Assoter for Law and Digital Culture at ciation of Entertainment Lawyers Brunel Law School in London and 2016 book, The Monetization of is an adjunct law professor at Han- the Global Music Business — from dong International Law School in Creators to Major Industry. She discussed the article on a panel at the Pohang, South Korea. 50th annual MIDEM convention in Cannes, France, in June.