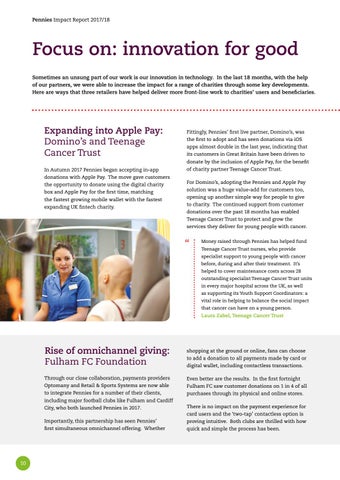 Focus on: innovation for good Sometimes an unsung part of our work is our innovation in technology. In the last 18 months, with the help of our partners, we were able to increase the impact for a range of charities through some key developments. Here are ways that three retailers have helped deliver more front-line work to charities’ users and beneficiaries.

Fittingly, Pennies’ first live partner, Domino’s, was the first to adopt and has seen donations via iOS apps almost double in the last year, indicating that its customers in Great Britain have been driven to donate by the inclusion of Apple Pay, for the benefit

of charity partner Teenage Cancer Trust. For Domino’s, adopting the Pennies and Apple Pay solution was a huge value-add for customers too, opening up another simple way for people to give to charity. The continued support from customer donations over the past 18 months has enabled Teenage Cancer Trust to protect and grow the services they deliver for young people with cancer.

Money raised through Pennies has helped fund Teenage Cancer Trust nurses, who provide specialist support to young people with cancer before, during and after their treatment. It’s helped to cover maintenance costs across 28 outstanding specialist Teenage Cancer Trust units in every major hospital across the UK, as well as supporting its Youth Support Coordinators: a vital role in helping to balance the social impact that cancer can have on a young person.

shopping at the ground or online, fans can choose to add a donation to all payments made by card or digital wallet, including contactless transactions.

Through our close collaboration, payments providers

Even better are the results. In the first fortnight

Fulham FC saw customer donations on 1 in 4 of all

to integrate Pennies for a number of their clients,

purchases through its physical and online stores.

including major football clubs like Fulham and Cardiff City, who both launched Pennies in 2017.

Importantly, this partnership has seen Pennies’

proving intuitive. Both clubs are thrilled with how

quick and simple the process has been.

Our mission is to help charities make a greater impact. By creating the digital charity box, encouraging charitable giving and championing the sector, Pennies is making feel-good giving a reality for millions of people, and making a difference for hundreds for charities. Read about our latest innovations and the impact of micro-donations in the Pennies Impact Report 2017/18. 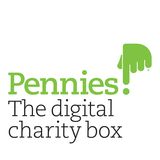