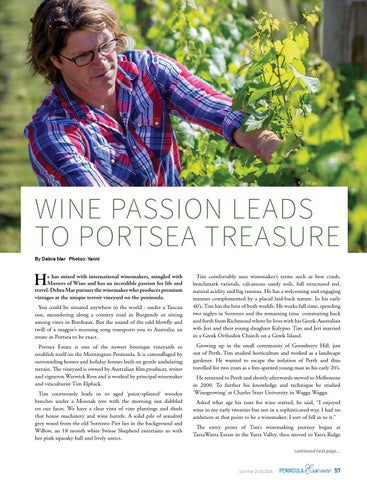 e has mixed with international winemakers, mingled with Masters of Wine and has an incredible passion for life and travel. Debra Mar pursues the winemaker who produces premium vintages at the unique terroir vineyard on the peninsula. You could be situated anywhere in the world - under a Tuscan sun, meandering along a country road in Burgundy or sitting among vines in Bordeaux. But the sound of the odd blowfly and twill of a magpie’s morning song transports you to Australia; an estate in Portsea to be exact. Portsea Estate is one of the newest boutique vineyards to establish itself on the Mornington Peninsula. It is camouflaged by surrounding homes and holiday houses built on gentle undulating terrain. The vineyard is owned by Australian film producer, writer and vigneron Warwick Ross and is worked by principal winemaker and viticulturist Tim Elphick. Tim courteously leads us to aged ‘paint-splinted’ wooden benches under a Moonah tree with the morning sun dabbled on our faces. We have a clear vista of vine plantings and sheds that house machinery and wine barrels. A solid pile of seasalted grey wood from the old Sorrento Pier lies in the background and Willow, an 18 month white Swisse Shepherd entertains us with her pink squeaky ball and lively antics.

Tim comfortably uses winemaker’s terms such as best crush, benchmark varietals, calcareous sandy soils, full structured red, natural acidity and big tannins. He has a welcoming and engaging manner complemented by a placid laid-back nature. In his early 40’s, Tim has the best of both worlds. He works full time, spending two nights in Sorrento and the remaining time commuting back and forth from Richmond where he lives with his Greek-Australian wife Jeri and their young daughter Kalypso. Tim and Jeri married in a Greek Orthodox Church on a Greek Island. Growing up in the small community of Gooseberry Hill, just out of Perth, Tim studied horticulture and worked as a landscape gardener. He wanted to escape the isolation of Perth and thus travelled for two years as a free-spirited young man in his early 20’s. He returned to Perth and shortly afterwards moved to Melbourne in 2000. To further his knowledge and technique he studied ‘Winegrowing’ at Charles Sturt University in Wagga Wagga. Asked what age his taste for wine started, he said, “I enjoyed wine in my early twenties but not in a sophisticated way. I had no ambition at that point to be a winemaker; I sort of fell in to it.” The entry point of Tim’s winemaking journey began at TarraWarra Estate in the Yarra Valley, then moved to Yarra Ridge continued next page...