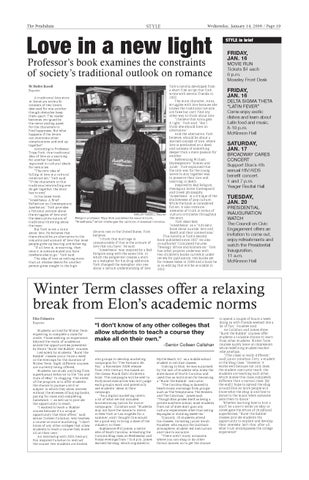 Love in a new light

York’s novella developed from a short film script that York wrote with several friends in 2002. A traditional love story The main character, Anna, in literature normally struggles with love because she consists of two lovers knows the traditional notions destined for one another are false but can’t find any though obstacles keep other way to think about love. them apart. The reader “I believe that Anna gets becomes intrigued by it right,” York said. “But I the never-ending quest think she should have an for the characters to alternative.” find happiness. But what And the alternative, York happens if the lovers believes, should be about a can overcome other learned concept of love, where complications and end up love is predicated on a deed together? and consists of something According to Professor deeper than a mere passion for Tripp York, this traditional another. idea of love as a yearning Referencing William for another has been Shakespeare’s “Romeo and ingrained in cultural ideals Juliet,” York explained that for centuries. the only way for the young “The very idea of lovers to stay together was falling in love is a cultural to preserve their love and construction,” York said. yearning in death. “If the characters in this Inspired by Bad Religion, traditional storytelling ever theologian Soren Kierkegaard do get together, the story and Greek philosophy, has to end.” “Anesthesia” is a critique of the In his latest book, shallowness of pop culture. “Anesthesia: A Brief While the book is considered Reflection on Contemporary fiction, it also contains Aesthetics,” York provides elements of truth in terms of a fictional account about cultural criticisms throughout Shelley Russell | Reporter the struggles of love and the story. Religion professor Tripp York published his second book, the destructive nature of York describes “Anesthesia,” which challenges the opinions of classical romance. traditional thinking about “Anesthesia” as a “nihilistic the topic. book about suicide, love and But York is not a cynic divorce rate in the United States, York death and their connections.” about love. He believes that believes. This novella is York’s second there should be an alternative to the “I think that marriage is book published since 2007. He also romanticized account of love that most unsustainable if this is the account of co-authored “Calculated Futures: people grow up hearing and believing. love that you have,” he said. Theology, Ethics and Economics.” York “If all love is, is yearning, then “Anesthesia” was inspired by a Bad has other projects underway with once it is consummated you have Religion song with the same title, in two children’s books currently under nowhere else to go,” York said. which the songwriter creates a story review for publication, two books set The idea of love as nothing more as a metaphor for his drug addiction. for release dates in 2009 and a book he than an intense desire for another York changed the metaphor into one is co-editing that will be available in person gives insight to the high about a certain understanding of love. 2010.

Winter Term classes offer a relaxing break from Elon’s academic norms Elise Delmerico Reporter Students arrived for Winter Term expecting to complete a class for credit. Those seeking an experience beyond the realm of academics seized the opportunities presented by Elon’s “Burst the Bubble” courses. Led solely by students, “Burst the Bubble” classes occur twice a week in the evenings for the duration of Winter Term. Eight different courses are currently being offered. Students can study anything from superhuman behavior to the &quot;Ins and Outs of eBay” to clogging. The intent of the program is to offer students the chance to pursue a skill or subject in which they show interest without the stresses of buying books, paying for class and completing homework — as well as to provide the opportunity to teach. “I wanted to teach a ‘Bubble’ course because it&#39;s a unique opportunity that Elon offers,” said senior Colleen Callahan, who teaches a course on movie marketing. “I don&#39;t know of any other colleges that allow students to teach a course they make all on their own.” An internship with 20th Century Fox inspired Callahan to instruct the course. Her students are broken

“I don&#39;t know of any other colleges that allow students to teach a course they make all on their own.”

into groups to develop marketing campaigns for “The Fantastic Mr. Fox,” a November 2009 release from 20th Century Fox based on the classic Roald Dahl children’s book. The campaigns will be sent to Hollywood executives who will judge each group’s work and potentially use students’ ideas in their campaign. “As a digital marketing intern, a lot of what we did included brainstorming tactics for movie campaigns,” Callahan said. “Students may not have the means to intern in New York or Los Angeles for a summer, and I thought this would be a good way to bring a dose of the industry to them.” Sophomore Will James, a native who of South Carolina, is teaching the Carolina Shag class on Wednesday and Friday evenings from 7 to 8 p.m. James learned the shag, which originated in

Myrtle Beach, S.C. as a middle school student in cotillion classes. Coming to Elon, he was surprised by the lack of students who knew the state dance of North Carolina and used this as motivation for becoming a “Burst the Bubble” instructor. “The Carolina Shag is danced to beach music and songs from groups such as The Temptations, The Embers and The Catalinas,” James said. “Though Elon prides itself as being a private southern school, most students from out of state don’t gain any cultural experiences other than eating Bojangles or drinking sweet tea.” Typically, 20 students attend his classes, including junior Sarah Foushee, who enjoys the laid-back atmosphere, student-led instruction and time to socialize. “There aren’t many occasions where you can shag or do other formal dances, so to get the chance

to spend a couple of hours a week doing so with friends seemed like a lot of fun,” Foushee said. As Callahan and James show, “Burst the Bubble” courses offer students a valuable chance to learn from other students. Winter Term courses surely leave an impression while redefining student-teacher relationships. “[The class] is really different,” said junior Jonathan Citty, a student in the Shag class. “However, it works well because not only does the student instructor teach, the students are teaching each other, which makes this class completely different than a normal class. [By the end] I hope to spread the shag around Elon so more people will know what the shag is and how to dance to the music when someone asks them to dance.” Whether learning how to knit a scarf, be a savvy seller on eBay or investigate the ethics of childhood superheroes, “Burst the Bubble” classes provide students the opportunity to explore and develop their interests. Isn’t that, after all, what truly encompasses the college experience?

The January 14, 2009 Edition of The Pendulum, Elon University's Student Newspaper 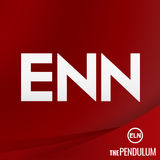