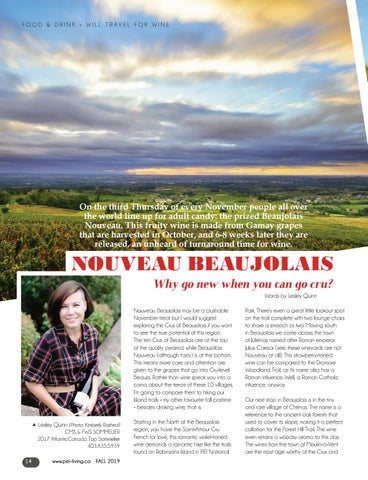 FOOD & DRINK - WILL TRAVEL FOR WINE

On the third Thursday of every November people all over the world line up for adult candy: the prized Beaujolais Nouveau. This fruity wine is made from Gamay grapes that are harvested in October, and 6-8 weeks later they are released, an unheard of turnaround time for wine.

NOUVEAU BEAUJOLAIS Why go new when you can go cru? Words by Lesley Quinn Nouveau Beaujolais may be a crushable November treat but I would suggest exploring the Crus of Beaujolais if you want to see the true potential of this region. The ten Crus of Beaujolais are at the top of the quality pyramid, while Beaujolais Nouveau (although tasty) is at the bottom. This means more care and attention are given to the grapes that go into Cru-level Beaujo. Rather than wine speak you into a coma about the terroir of these 10 villages, I’m going to compare them to hiking our Island trails - my other favourite fall pastime - besides drinking wine, that is. ▲ Lesley Quinn (Photo: Kimberly Rashed) CMS & FWS SOMMELIER 2017 AtlanticCanada Top Sommelier 403.835.5939 14

Starting in the North of the Beaujolais region, you have the Saint-Amour Cru. French for love, this romantic violet-toned wine demands a romantic hike like the trails found on Robinsons Island in PEI National

Park. There’s even a great little lookout spot on the trail complete with two lounge chairs to share a smooch or two. Moving south in Beaujolais we come across the town of Juliénas named after Roman emperor Julius Caesar (see, these vineyards are not Nouveau at all). This strawberry-toned wine can be compared to the Dromore Woodland Trail, as its name also has a Roman influence...Well, a Roman Catholic influence, anyway. Our next stop in Beaujolais is in the tiny and rare village of Chénas. The name is a reference to the ancient oak forests that used to cover its slope, making it a perfect collation for the Forest Hill Trail. The wine even retains a woodsy aroma to this day. The wines from the town of Moulin-à-Vent are the most age worthy of the Crus and 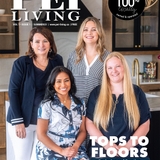