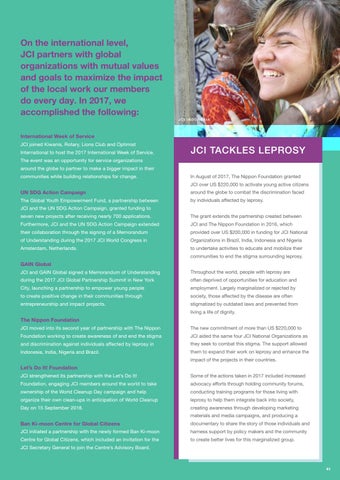 On the international level, JCI partners with global organizations with mutual values and goals to maximize the impact of the local work our members do every day. In 2017, we accomplished the following: JCI INDONESIA

The event was an opportunity for service organizations around the globe to partner to make a bigger impact in their communities while building relationships for change.

In August of 2017, The Nippon Foundation granted JCI over US $220,000 to activate young active citizens

around the globe to combat the discrimination faced

The Global Youth Empowerment Fund, a partnership between

by individuals affected by leprosy.

The grant extends the partnership created between

JCI and The Nippon Foundation in 2016, which

their collaboration through the signing of a Memorandum

of Understanding during the 2017 JCI World Congress in

to undertake activities to educate and mobilize their communities to end the stigma surrounding leprosy.

Throughout the world, people with leprosy are

during the 2017 JCI Global Partnership Summit in New York

often deprived of opportunities for education and

employment. Largely marginalized or rejected by

to create positive change in their communities through

society, those affected by the disease are often

stigmatized by outdated laws and prevented from living a life of dignity.

Foundation working to create awareness of and end the stigma

and discrimination against individuals affected by leprosy in

they seek to combat this stigma. The support allowed

them to expand their work on leprosy and enhance the impact of the projects in their countries.

Let’s Do It! Foundation JCI strengthened its partnership with the Let’s Do It!

Some of the actions taken in 2017 included increased

Foundation, engaging JCI members around the world to take

ownership of the World Cleanup Day campaign and help

conducting training programs for those living with

organize their own clean-ups in anticipation of World Cleanup

leprosy to help them integrate back into society,

creating awareness through developing marketing materials and media campaigns, and producing a

documentary to share the story of those individuals and

JCI initiated a partnership with the newly formed Ban Ki-moon

Centre for Global Citizens, which included an invitation for the

to create better lives for this marginalized group.

JCI Secretary General to join the Centre’s Advisory Board.

Take a look at the impact JCI members have created around the world over the last year helping advance the Global Goals for Sustainable Development. 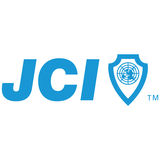