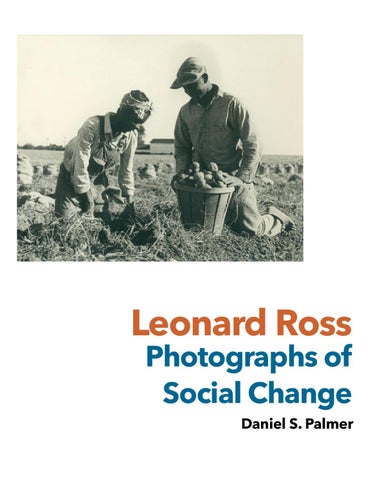 Preface I came to this project at the encouragement of Dr. Seth Gopin, my professor at Rutgers University, with whom I taught in Paris. He explained that he had recently received a significant collection of photographs from his deceased uncle, an original resident of the Jersey Homesteads, and that they were ripe for scholarship. As I am currently writing my dissertation on the New Deal architecture and art of the Jersey Homesteads by Alfred Kastner and Ben Shahn, the opportunity to explore the photographic oeuvre of one of the community’s early settlers was highly appealing. Although only a portion of Ross’ images address the town, his artistic philosophy and humanitarian outlook were highly influenced by Ben Shahn and the townspeople’s liberal sensibility. I was duly interested in working with the photographs of such a socially engaged artist, and tried to chart this strand of social concern throughout Ross’ career. As my research developed, I was increasingly pleased with the material I uncovered and have thoroughly enjoyed studying the photographs of this remarkably skilled artist who was committed to social change. I am indebted to Ross’ wife Vivian, as well as the rest of the Ross family for their willing participation in this exhibition. Eric Drotch and the Peddie School have been welcoming hosts of a local artist. I would also like to thank Drs. Seth Gopin and Martin Eidelberg for their insightful enthusiasm, my family for their unflagging support, and Natalie Musteata for her constancy and thorough encouragement. This project is dedicated to the memory of Leonard Ross for his inspiring photographs.

construction projects of Bethlehem Steel Company were exhibited in the Metropolitan Museum and the Museum of Modern Art. In his earliest photographs of local subjects, taken in New York City and central New Jersey, he quickly displayed a true sensitivity for the medium. His mentor, the renowned artist Ben Shahn, imparted the valuable techniques he used to warmly depict his subjects. Rossâ&#x20AC;&#x2122; concern for the people he photographed was fostered by his membership in the Photo League, a cooperative of socially engaged photographers, which he formally joined in 1947. Through this association, he was influenced by many of Americaâ&#x20AC;&#x2122;s most important photographers. Together, they shared the deeply felt belief that the camera had the power to transform society. Accordingly, this exhibition of an understudied photographer is produced with the hopes of inspiring the next generation of budding artists to look more closely at the world around them.

day Roosevelt), where he and his family were among the earliest settlers. After he expressed his interest in photography to Ben Shahn, the communityâ&#x20AC;&#x2122;s most notable resident, the artist graciously gave the admiring young man his first camera. This gift came with the memorable advice that guided his photographic career -- to direct his attention to the world around him and record what he saw with a concerned eye. Consequently, the burgeoning photographer took his first pictures in downtown Hightstown and the surrounding environs. These images document his attempt to understand the visual culture of the region, and demonstrate an innate sense of how to best represent his subjects.

Plate 4. House in Hightstown with mailman at gate

Plate 7. Two men against a wall in downtown Hightstown

hen Shahn reviewed Ross’ first attempts, he criticized them for their excessive waste.

That is, film was expensive, and instead of shooting a subject numerous times, Shahn carefully composed his images in the viewfinder before taking the picture. This technique resulted in his striking images, and from this point forward, Ross carefully chose his subjects, angles, and the opportune moment in which to capture them. His subsequent photographs demonstrate a careful attention to composition, as well as an interest in the psychology and character of his subjects. Shahn’s influence, as well as that of the leftist Jersey Homesteads community, can be seen in Ross’ attention to the theme of labor. This dedication to the working class is especially present in his dignified images of the migrant potato pickers who worked in Hightstown’s fields.

Photographic Company of the U.S. Army’s Pictorial Service. Though Ross was lucky enough to avoid active conflict, he photographed the war’s aftermath with remarkable sympathy toward its victims and displaced persons. Upon his return in 1947, Ross relocated to New York City to make his name in photography. He worked as a freelance photographer for various photo agencies, undertaking assignments for magazines such as Life and Fortune. Indeed, this exhibition’s creative installation is intended to evoke the mass-media world of photo offices and magazine headquarters in which Ross and other mid-century photographers thrived.

changing post-war landscape of the booming metropolis. This made him an ideal candidate for membership in the Photo League, where he became involved with Sid Grossman, Sol Libsohn, Paul Strand, Jack Delano, John Vachon, Edwin and Louise Rosskam, and many other major figures of American mid-century photography. They guided their cameras toward the city’s masses and its labor force. In Ross’ resulting images, we can see remarkable developments in his worldview, technique and skill. Notably, a series of these photographs were featured in a young photographer’s competition for Life magazine. Ross was also invited to exhibit in the group’s 1948 landmark exhibition This is the Photo League, which was received with great praise. As his photographic skills developed, his artworks grew increasingly compelling and more compositionally dramatic. This rising confidence can certainly be attributed to the instruction he gleaned from his Photo League compatriots and Shahn’s continued mentorship.

Plate 32. Life Magazine Contest: Pattern of Construction «… but as one looks more closely one sees it as an ordered confusion, almost a dance pattern»

Plate 35. Life Magazine Contest: Pattern of Construction ÂŤOne finds the warmth and dignity of each individual...Âť

he 1950s were a fruitful years for Ross: he married his wife Vivian in 1951, was involved

with the production of Morris Engel, Ruth Orkin, and Raymond Abrashkin’s innovative 1953 film Little Fugitive, and in 1955 became a professional editorial photographer for Bethlehem Steel Corporation. He documented the company’s steel production and mining, as well as its construction of ships, skyscrapers, and bridges with a keen artistic sensibility and sense of humanity. These photographs demonstrate the lessons he learned from examining Lewis Hine’s photographs with the Photo League. Ross was inspired to depict the courageously workmen who produced these industrial behemoths, often while in precarious positions. Perhaps the most striking and important of Ross’ works from this period, Man on Bridge Cable, captures a worker

framed against the dramatic view from atop the George Washington Bridge. It was exhibited in

Photography in the Fine Arts, an exhibition at the Metropolitan Museum of Art in 1960, alongside works by important photographers such as Irving Penn, Dorothea Lange, Robert Capa, and Henri Cartier-Bresson, among others. Ross was also honored with a one-man show at the Allentown Art Museum in 1962. Though his work at the time was commissioned by a major corporation, he never abandoned his concern for photography’s aesthetic and social value. While his photographs may seem to celebrate the corporation’s enormous constructions and boldly advocate for American progress, they ultimately insist that this would never be possible without the strong resolve of its hard working citizens.

oward the later years of his life, and especially after he retired from Bethlehem Steel in 1982,

Ross began to appreciate the freedom of his artistic medium. This is reflected in a final period of more expressionistic photographs. Nearly abstract images of molten steel, endless rolls of glimmering sheet metal, and industrial landscapes vividly portray the technological sublime of late capitalism. Others turn toward more intimately poetic subjects to convey a sense of serenity with the natural world and its phenomena. This retrospective of Leonard Ross concludes with the most lyrical of his photographs, which captures the twilight shimmering through the trees from his rural residence. This image crystallizes the artistâ&#x20AC;&#x2122;s belief in the power of the camera as a tool for examining and conveying the subtle beauty in the world.

(Above) Plate 50. Steel hook (Next Page) Plate 51. Twilight at the steel plant 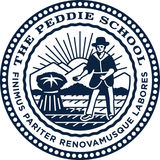