On a roll BELLA OKUYA IS FOUNDER OF PECKHAM-BASED COMMUNITY PHOTOGRAPHY COLLECTIVE RED ROLLED & SEEN. She tells us about the group’s latest project, which has involved collaborating with blind and partially sighted people from the local area WORDS JUMOKÉ FASHOLA PHOTO JOHN YABRIFA

Bella Okuya gets emotional when she talks about the project that she and her community photography collective, Red Rolled & Seen, created with Eye to Eye – a group of blind and partially sighted elders based at the Southwark Pensioners Centre on Camberwell Road. She’s describing a set of photographs that a 91-year-old lady brought in to show the group. “This lady took her camera into her local park, started speaking to strangers and asked them to photograph her in different places. “She got people to take pictures of her at the local library, the park, at her church, the various groups she attends – and so we had a set of pictures of her standing, looking beautiful with her cane. It gave us a real insight into what was of value to her. “She lives alone, as her husband had passed away after she spent many years caring for him, so this was eye-opening. She loved it because it was a way for her to engage with her community.” Bella studied English literature at Westminster university. Then about seven years ago she took a short course in photography at the Working Men’s College in Camden, followed by a yearlong diploma at Morley College. She is passionate about using photography as a tool for social documentaries, an interest she developed while getting to know her local area, which was then Finsbury Park. “My way of exploring the area was to take my camera out and photograph it,” she says. “Finsbury Park, like Peckham, is such an interesting place, with a diverse range of people. Everything from middle-class white people to working-class minorities, but they don’t mix at all! Not in bars or in the cafes.” She discovered the one place where everyone did engage with each other was the local park. “In the park they all came together, playing sport and just hanging out,” she says. She became fascinated by this and started photographing the people who used the park, from families to basketball players. Around four years ago she moved to Walworth, where she continued to hone her craft by photographing local events such as Peckham Festival. So where did the idea for Red Rolled & Seen come from? “I was talking to a friend and said, ‘It would be nice to have a group of people who were interested in the same sort of stuff, like social documentaries, who might be up for forming a community’,” she says. The name of the group is based on a track of the same name by Finley Quaye, whose title, says Bella, is inspired by the Pan-African flag. The group’s ethos is to unify people with a shared interest, building a diverse community through photography. To start with, Bella set about finding people to join the group, utilising a variety of networks, from Citizens UK to community leaders. After looking for somewhere local to hold the meetings, she ventured into Peckham Levels. “I was very lucky at the time because there was a social action officer, Hebe Foster, who was on a Year Here social enterprise placement, as part of her postgraduate studies,” Bella says. OCTOBER/NOVEMBER 2020

“She was really passionate about change, social enterprise and community and she championed Red Rolled & Seen. If it wasn’t for her I may not have started it. I’m so grateful to Peckham Levels for the free space.” The first meeting of Red Rolled & Seen is something Bella is very proud of. “There was a great diversity of people, from professional photographers to people with a simple interest in photography, people of different ages, backgrounds and abilities, a huge mix,” she says. From that first meeting, they set their goals and values, coming together as a group to support and challenge each other. They did photo walks, talks from local photographers like Jérôme Favre and kept it hyperlocal and community based, working towards an exhibition held in September last year as part of Peckham Festival. “It was a joy to see beginners grow in confidence, find their voice and document our community,” Bella says. Following the success of Red Rolled & Seen’s first year, Bella decided to change strategy and work with specifically targeted groups. After successfully applying for mayor of London funding, she created a bespoke project for the Southwark Pensioners Centre and the charity BlindAid, working with blind and partially sighted people within Southwark to tell their

stories. It took Bella back to her roots of social activism and telling stories through photography, especially with groups that are often voiceless. It was not without its challenges. Bella and her team of Red Rolled & Seen volunteers had to learn new ways of working and alleviating participants’ fears and concerns. “It’s been a steep learning curve for me,” says Bella. “We learnt to take their fears into consideration, such as things like potentially getting mugged and we also had to develop a great deal of flexibility in every situation. We had to think of alternative and different ways to document their stories.” Letting go of expectations has been liberating and cathartic for Bella, who as a professional photographer has had to learn that the value of a picture is not just in its technical prowess or aesthetic but importantly in the story it tells. Which brings us back to the 91-year-old lady and her camera. “My favourite picture of hers,” says Bella, “is one where all the contents of her handbag have been tipped out on to her bed, so all the various aspects of her life can be seen in that one picture.” Unfortunately, the pandemic cut short the project a few months early and the collective weren’t able to hold an exhibition or any formal ending. But they did manage to bring together

all of the amazing photos taken and shared by the participants in the form of a fundraising zine. “Sadly, one of the participants, Winnie, passed away during the pandemic, and we have dedicated the zine to her. She will be missed and we appreciate all she taught us,” says Bella. They’re hoping to continue working with the participants, using photography to ease their transition back into the space and reflect on their experiences. Lockdown meant Red Rolled & Seen’s work literally stopped overnight. “It was tough at first,” says Bella. “We had so many plans.” On a personal level, the events of 2020 have affected Bella deeply, and have made her reflect on her practice and the role of photography in society. She is surprised at how much her camera has helped her navigate this tough time. “I took many self-portraits, which is something that I rarely have time to do,” she says. “I was able to deepen my relationship with myself and my vulnerabilities, during such a vulnerable time. “I was saddened by the high numbers of those affected by the virus in my community, as well as the events in the USA, which led to the Black Lives Matter movement. This year has been painful for the community and myself in such a layered way, but I feel we’ve all grown as a result.” THE PECKHAM PECULIAR / 19 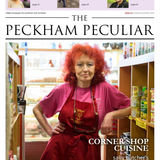 Issue 39 of The Peckham Peculiar

If you've not already picked up a copy of the printed version, the latest issue is now available to read online! For all advertising and ed...

Issue 39 of The Peckham Peculiar

If you've not already picked up a copy of the printed version, the latest issue is now available to read online! For all advertising and ed...