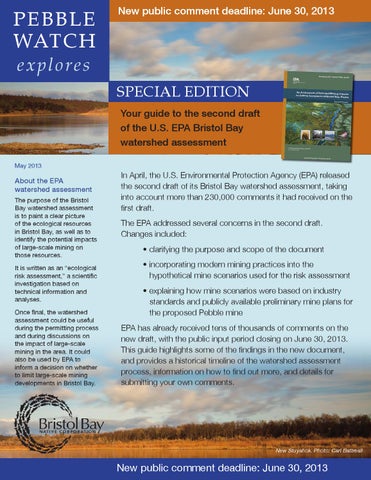 special edition Your guide to the second draft of the U.S. EPA Bristol Bay watershed assessment May 2013

About the EPA watershed assessment

In April, the U.S. Environmental Protection Agency (EPA) released the second draft of its Bristol Bay watershed assessment, taking into account more than 230,000 comments it had received on the first draft. The EPA addressed several concerns in the second draft. Changes included:

EPA has already received tens of thousands of comments on the new draft, with the public input period closing on June 30, 2013. This guide highlights some of the findings in the new document, and provides a historical timeline of the watershed assessment process, information on how to find out more, and details for submitting your own comments.

Changes to the assessment

Working with mine scenarios

While the assessment is still around the same size (now 1,160 pages instead of 1,124), it is organized differently to better reflect the format of an ecological risk assessment. It now has 14 chapters covering two main categories. Chapters 2-6 focus on the “Problem Formulation,” which covers the scope of the assessment, the resources of the Bristol Bay watershed and the mine scenarios used to analyze risk to those resources. Chapters 7-14 lay out the risks and impacts to salmon, wildlife and Alaska Native culture for both day-to-day mine operations, potential mine failure and cumulative effects from multiple mines. The EPA focused on describing direct effects to salmon and how those effects would in turn impact wildlife and Alaska Native culture. Other direct impacts of mining development to wildife, and to people (both negative and positive), were not considered.

The EPA stated that the revised draft reinforces its original conclusions that a single large mine would cause loss of stream habitat and wetlands even under normal operations, and that some type of accident or failure is likely during the centuries-long post closure period. In the second draft, the EPA included additional risks based on input from the public, peer reviewers and tribes.

Since there is no published mine plan from developers, the EPA developed three different mining scenarios to determine risks of large-scale mining in the Nushagak/Kvichak watershed. The scenarios, all in the Pebble deposit area, cover 20-, 25- and 78-year mine operating durations. Use of a “hypothetical” mine scenario is one of the biggest criticisms the EPA received on the first draft of the assessment. In the latest version, the EPA clarifies how it came up with the scenarios, saying that they realistically reflect the type of development that would be typical of a large-scale copper mine in Bristol Bay. The EPA based the scenarios on preliminary mine details published by Northern Dynasty Minerals, a 50 percent owner in the Pebble deposit, as well as consultations with experts and review of current mining literature. The agency noted that even a mine plan introduced by developers would look different in the beginning, as there are always changes throughout the permitting process. The EPA also established that the revised draft assumes that developers would use modern mining practices. This is an important distinction, as the report finds that there would be impact to the area even under normal operating conditions using modern techniques.

Nine federally recognized tribes and other organizations ask EPA to use Clean Water Act authority to stop Pebble mine development.

EPA announces watershed assessment plan. A study period begins, during which EPA interviews Bristol Bay area residents, collects scientific information about the area, and gathers input from other government agencies and tribes. EPA drafts the first version of the assessment, providing updates to the public along the way.

The EPA included additional information on subsistence, impacts to way of life and case studies on how other Alaska resource extraction activities (North Slope, Red Dog Mine, Exxon Valdez spill) have impacted Native cultures. Based on some of these experiences, the EPA wrote that there would be “only modest direct employment benefits” in the area from large-scale mining. In Chapter 12, the EPA described how the loss of subsistence resources could negatively affect health, social networks, language and value and belief systems of Native peoples. Highlighted are representative quotes from Alaska Natives who testified during public meetings on the first draft of the watershed assessment regarding their concerns about the effects of large-scale mining on Native cultures.

In response to criticisms that it hadn’t adequately discussed methods for compensating for impacts to fish, wetlands and streams, the EPA added Appendix J, “Compensatory Mitigation.” This includes analysis of several ideas that peer reviewers and individuals had suggested, including bank credits, spawning channel construction, beaver dam removal, road removal, hatchery construction, fish stocking, and commercial fishery harvest reduction. Report authors concluded that there are “significant challenges” with the measures suggested, and it is questionable whether they would be effective enough to address the magnitude of loss that would occur under the mine scenarios the EPA studied.

In-depth Read our summary of the first draft of the watershed assessment at www.pebblewatch.com. This document includes a description of each chapter in the original assessment. For the EPA’s fact sheet listing major changes in version two, an executive summary and the full text of the assessment and its appendices, go to www2.epa.gov/bristolbay.

What are people saying? Comments on the watershed assessment are available online. Find out what others think about the assessment by visiting the comments page. Find a link at www2.epa.gov/bristolbay.

Later in 2013 Revision/release of final

Changes to the assessment (cont.) Impacts to water

The EPA included additional information about water loss and water quality impacts in Chapter 8. It concludes that some leachate would escape collection and some water treatment failure is likely to occur. This chapter discusses common toxicants (like copper, aluminum and zinc) and their effects on fish. One of the greatest sources of uncertainty for water quality risk, according to the EPA, is the lack of a detailed understanding of how water moves in this area. Groundwater and surface water interaction are complex and more information is needed. EPA also referenced a study of hard rock metal mines in the U.S. that found most mines had violated water quality standards even though their mine permits included mitigation measures to avoid this. Failures occurred in part because their geochemical and hydrological characterizations were inadequate.

Chapters 10 and 11 include expanded analysis of risks in the transportation corridor, including the possibility of pipeline spills, truck accidents involving process chemicals and culvert failures. Authors state that it is rarely possible to build roads that have no negative effect on streams.

Pebble Watch is an impartial, educational and fact- based resource for sharing information about the proposed Pebble project. It is a program of the Bristol Bay Native Corporation Land Department. The Pebble Watch team consists of scientists and science communicators who keep the public informed about issues related to potential Pebble mine development— from science reports to permitting. Call (800) 426-3602 or write staff@pebblewatch.com. Visit Pebble Watch online at www.pebblewatch.com or “Like” us on Facebook for regular announcements.

Questions to consider • Do you particularly agree or disagree with something in the assessment? • Do you believe the proposed Pebble mine could have an impact on Bristol Bay watersheds? • Is there something in your personal experience or knowledge that would add value to your comment?

The EPA has stated that it will publish the final watershed assessment later in 2013 and will include a document detailing the agency’s response to public comments. Information contained in this document represents an unofficial summary of the EPA’s draft report. This overview was not prepared by the EPA and is not intended to be comprehensive. Please access the full report for original information from the EPA before preparing your comments.

Pebble Watch covers the major changes EPA makes in the second draft of its Bristol Bay watershed assessment, and includes a timeline and info for submitting public comments. 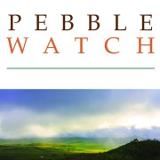