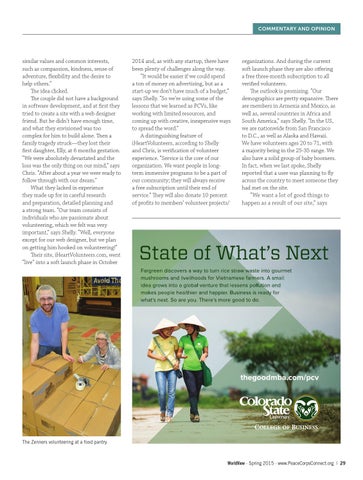 similar values and common interests, such as compassion, kindness, sense of adventure, flexibility and the desire to help others.” The idea clicked. The couple did not have a background in software development, and at first they tried to create a site with a web designer friend. But he didn’t have enough time, and what they envisioned was too complex for him to build alone. Then a family tragedy struck—they lost their first daughter, Elly, at 6 months gestation. “We were absolutely devastated and the loss was the only thing on our mind,” says Chris. “After about a year we were ready to follow through with our dream.” What they lacked in experience they made up for in careful research and preparation, detailed planning and a strong team. “Our team consists of individuals who are passionate about volunteering, which we felt was very important,” says Shelly. “Well, everyone except for our web designer, but we plan on getting him hooked on volunteering!” Their site, iHeartVolunteers.com, went “live” into a soft launch phase in October

2014 and, as with any startup, there have been plenty of challenges along the way. “It would be easier if we could spend a ton of money on advertising, but as a start-up we don’t have much of a budget,” says Shelly. “So we’re using some of the lessons that we learned as PCVs, like working with limited resources, and coming up with creative, inexpensive ways to spread the word.” A distinguishing feature of iHeartVolunteers, according to Shelly and Chris, is verification of volunteer experience. “Service is the core of our organization. We want people in longterm immersive programs to be a part of our community; they will always receive a free subscription until their end of service.” They will also donate 10 percent of profits to members’ volunteer projects/

organizations. And during the current soft launch phase they are also offering a free three-month subscription to all verified volunteers. The outlook is promising. “Our demographics are pretty expansive. There are members in Armenia and Mexico, as well as, several countries in Africa and South America,” says Shelly. “In the US, we are nationwide from San Francisco to D.C., as well as Alaska and Hawaii. We have volunteers ages 20 to 71, with a majority being in the 25-35 range. We also have a solid group of baby boomers. In fact, when we last spoke, Shelly reported that a user was planning to fly across the country to meet someone they had met on the site. “We want a lot of good things to happen as a result of our site,” says

The Zenners volunteering at a food pantry. 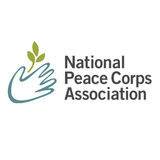 Worldview magazine is a 28-year-old quarterly magazine of news and commentary about the Peace Corps community. In each issue, we feature art...

Worldview magazine is a 28-year-old quarterly magazine of news and commentary about the Peace Corps community. In each issue, we feature art...