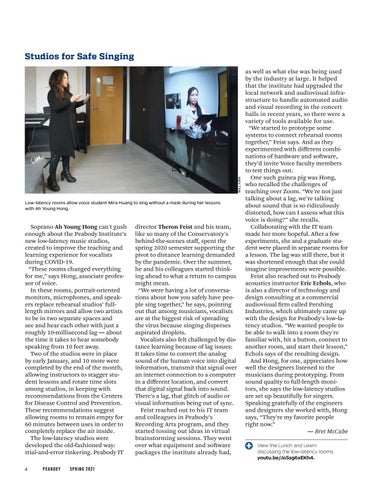 Low-latency rooms allow voice student Mira Huang to sing without a mask during her lessons with Ah Young Hong.

Soprano Ah Young Hong can't gush enough about the Peabody Institute’s new low-latency music studios, created to improve the teaching and learning experience for vocalists during COVID-19. “These rooms changed everything for me,” says Hong, associate professor of voice. In these rooms, portrait-oriented monitors, microphones, and speakers replace rehearsal studios’ fulllength mirrors and allow two artists to be in two separate spaces and see and hear each other with just a roughly 10-millisecond lag — about the time it takes to hear somebody speaking from 10 feet away. Two of the studios were in place by early January, and 10 more were completed by the end of the month, allowing instructors to stagger student lessons and rotate time slots among studios, in keeping with recommendations from the Centers for Disease Control and Prevention. These recommendations suggest allowing rooms to remain empty for 60 minutes between uses in order to completely replace the air inside. The low-latency studios were developed the old-fashioned way: trial-and-error tinkering. Peabody IT 4

director Theron Feist and his team, like so many of the Conservatory's behind-the-scenes staff, spent the spring 2020 semester supporting the pivot to distance learning demanded by the pandemic. Over the summer, he and his colleagues started thinking ahead to what a return to campus might mean. “We were having a lot of conversations about how you safely have people sing together,” he says, pointing out that among musicians, vocalists are at the biggest risk of spreading the virus because singing disperses aspirated droplets. Vocalists also felt challenged by distance learning because of lag issues: It takes time to convert the analog sound of the human voice into digital information, transmit that signal over an internet connection to a computer in a different location, and convert that digital signal back into sound. There’s a lag, that glitch of audio or visual information being out of sync. Feist reached out to his IT team and colleagues in Peabody’s Recording Arts program, and they started tossing out ideas in virtual brainstorming sessions. They went over what equipment and software packages the institute already had,

as well as what else was being used by the industry at large. It helped that the institute had upgraded the local network and audiovisual infrastructure to handle automated audio and visual recording in the concert halls in recent years, so there were a variety of tools available for use. “We started to prototype some systems to connect rehearsal rooms together,” Feist says. And as they experimented with different combinations of hardware and software, they’d invite Voice faculty members to test things out. One such guinea pig was Hong, who recalled the challenges of teaching over Zoom. “We're not just talking about a lag, we’re talking about sound that is so ridiculously distorted, how can I assess what this voice is doing?” she recalls. Collaborating with the IT team made her more hopeful. After a few experiments, she and a graduate student were placed in separate rooms for a lesson. The lag was still there, but it was shortened enough that she could imagine improvements were possible. Feist also reached out to Peabody acoustics instructor Eric Echols, who is also a director of technology and design consulting at a commercial audiovisual firm called Pershing Industries, which ultimately came up with the design for Peabody's low-latency studios. “We wanted people to be able to walk into a room they're familiar with, hit a button, connect to another room, and start their lesson,” Echols says of the resulting design. And Hong, for one, appreciates how well the designers listened to the musicians during prototyping. From sound quality to full-length monitors, she says the low-latency studios are set up beautifully for singers. Speaking gratefully of the engineers and designers she worked with, Hong says, “They're my favorite people right now.” —  Bret McCabe View the Lunch and Learn discussing the low-latency rooms: youtu.be/Jo5sg6xEKh4. 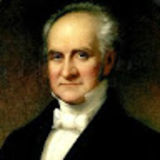