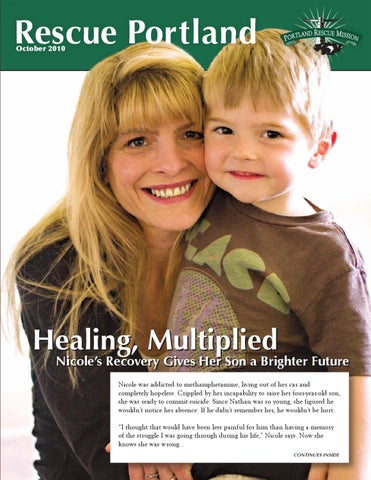 Nicole’s Recovery Gives Her Son a Brighter Future Nicole was addicted to methamphetamine, living out of her car and completely hopeless. Crippled by her incapability to raise her four-year-old son, she was ready to commit suicide. Since Nathan was so young, she figured he wouldn’t notice her absence. If he didn’t remember her, he wouldn’t be hurt. “I thought that would have been less painful for him than having a memory of the struggle I was going through during his life,” Nicole says. Now she knows she was wrong… CONTINUES INSIDE

One Healed Life Leads to Another For both Nicole and Ed, a mother’s health affects the well-being of a son. Nicole was so badly addicted that she wanted to kill herself before her young son could form memories of her. Ed’s life, on the other hand, was shaped by his mother’s death, even though it happened when he was only an infant. Today, as Ed heals and recovers from a traumatic childhood, Nicole’s son heals through his mom’s recovery. Nicole summarizes it well when she says, “You heal one life, and so many others are affected.” Her recovery has changed the direction of both their lives. That’s total life recovery, multiplied! Many stories at the Mission sound like Nicole’s, seemingly hopeless because of bad choices. Others are like Ed’s, struggles from the very beginning. But these tragic life stories can be rewritten. Maybe it starts with a meal and some warm clothes. It could start when someone sits down and takes the time to listen. God writes new stories every day at the Mission when people place their trust and hope in Him. And that’s the beauty in the common bond between Nicole, Ed and dozens more at the Mission. Their stories have a new direction. Through your prayers, your service and your gifts, you help them grow and change. You help them discover Christ and His healing power in their lives. You show them Christ’s love. You give them hope. I want to encourage you to read through these stories and remember that hundreds of people like Nicole and Ed come to us every day at the Mission. God is at work to transform their stories, thanks to you. Be blessed,

Leave a lasting impact with a legacy and give hope to future generations. You will help save lives, and save taxes. Our qualified investment and tax consultants can help you create a plan that fits your unique needs. Visit www.PortlandRescueMission.org/Legacy or call 503-MISSION (647-7466) for information.

Portland Rescue Mission receives no government funding, but relies completely on voluntary support from individuals, businesses, foundations, organizations and churches. $1.88 pays for one meal for one person, and that’s just the beginning of total life recovery. Thanks for considering a gift today! www.PortlandRescueMission.org/GiveOctober

…When Nathan was born, Nicole had already been a functioning meth addict for two decades. She’d tried several short-term drug treatment programs before, but nothing worked. “I guess I thought that having a baby would convince me to stop completely. It didn’t.” Lonely and overwhelmed by the responsibilities of motherhood, Nicole maintained her habit at drug houses, outside of her family’s home. Nothing was changing—Nicole couldn’t quit. Her relationship with her husband suffered, and tension filled their home. Nathan, just a toddler, was confused and frustrated. Doing what she thought was best for her son, Nicole moved out of the house for good. She stayed with family and at drug houses for a while, and eventually resorted to sleeping in her car during the day and rummaging through dumpsters for food at night. During visits with Nathan at home, she was strung out and exhausted. She had nothing to offer. And she could tell he was hurting. Nathan’s pain pushed Nicole to rock-bottom. She desperately wanted to be a good mom, but she was completely hopeless and depressed, ready to give up. Alone in her car one night, she said a prayer. “I simply asked God, if He was there, to help me.” Days later, she spoke with someone at Shepherd’s Door, the women and children’s ministry of Portland Rescue Mission. A room was available, and she was invited to begin New Life Recovery Ministry.

“I had a spark of hope for the first time in a long, long time.” Nicole began to deal with the problems in her life. For 20 years, she had simply veiled them with denial and drugs. She learned her addictions kept her from dealing with deep-rooted issues. Now, she turns to God’s grace for strength when times get tough because she knows He will carry her through. “As hard as it can be, I know there is beauty on the other side of every obstacle.” Nathan began to heal, too. He found a safe place where he could visit his mother, free from the

Already a reader, Nathan has fun going through books in the library at Shepherd’s Door with his mom.

anguish that drugs had created before. He knows he can trust his mom—she can take care of him. And that’s given him freedom to be a kid again. He’s talkative. He laughs a lot. He’s made friends with other children at Shepherd’s Door, and staff and residents notice the positive change in him. Simply put, he’s happy. “You heal one life, and so many others are affected,” Nicole points out. Nathan is proof of that. He has his childhood back, and Nicole has a new hope in life. Nathan candidly clarifies his mom’s time in recovery at Shepherd’s Door, hardly looking up from his toys. “It’s good that she’s here. She’s getting better.” Nicole looks at Nathan and smiles, tears in her eyes and lost for words. They both have hope for the future because of God’s healing work. Want to see more? Watch Nicole’s video story of hope online at www.PortlandRescueMission.org/Nicole

More than a meal. More than a bed. Give hope to families like Nicole and Nathan today!

The Race Is Over

Ed Doesn’t Have To Run Anymore “I’m not going to run anymore—I’m not going to run back to drugs because of fear,” Ed says. What’s a grown man like him with years of hard living got to be afraid of? What’s he running from? Ed’s been running his whole life. At age 12, he was raped by a friend’s older brother. It happened again when he was 16. Both times, Ed was high on marijuana. So Ed ran from the agonizing memory and guilt of those horrid events—events that were brought on by drugs and by bigger, stronger people. But Ed was running before the drugs. When he was just an infant, his mother died of lung cancer. His father worked hard to support seven children,

but that took the place of real affection and deep relationships with Ed and his siblings. Ed often felt abandoned. He learned to fend for himself. He watched his older brothers and sisters turn to drugs to soothe their troubles, and eventually, he did too. He ran toward drugs when he couldn’t find comfort in people. In 2009, Ed was still running. He had joined a traveling carnival in Las Vegas, but lost his job when his boss saw him hallucinating from cocaine use. “He basically told me to pack my bags,” Ed recalls. With no family or friends to turn to, Ed hitchhiked to the outskirts of Portland. He walked 130 blocks to Portland Rescue Mission. He nearly collapsed at the door.

Ed was exhausted. He was tired of running. But after one meal at the Mission, he found a place where he could rest. And he stopped running. At the Mission, staff and other residents greeted Ed with acceptance and encouragement. He committed himself to New Life Recovery. Over the next year, he faced the root cause of his homelessness. The trauma of his early years had shaped Ed’s entire life. Once he understood that, God was able to heal him. “I surrendered. I gave in to the Lord. Even though I reached out and grabbed the door to the Mission, it was God who led me here.” Ed diligently engages in the counseling, education and job preparation at the Mission. He’s reconciled relationships with family and loved ones. For the first time in his life, he trusts God, and that gives him the strength to take responsibility for his future. “My past will always be there, but I know now that God has always been in my life. He’s here for me, no matter what.” The race is over for Ed. He’s found true rest in total life recovery. Ed’s dynamic personality says, “Welcome!” when he greets guests from the street at Burnside Shelter.

Get the whole story. Watch Ed’s video story of hope online at www.PortlandRescueMission.org/Ed

Your gift offers total life recovery to homeless and hurting men and women like Ed. Thank you!