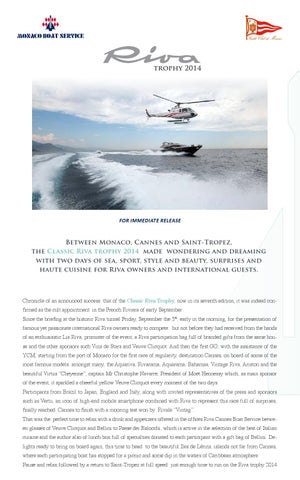 Between Monaco, Cannes and Saint-Tropez, the Classic Riva trophy 2014 made wondering and dreaming with two days of sea, sport, style and beauty, surprises and haute cuisine for Riva owners and international guests.

Chronicle of an announced success: that of the Classic Riva Trophy, now in its seventh edition, it was indeed confirmed as the cult appointment in the French Riviera of early September . Since the briefing at the historic Riva tunnel Friday, September the 5th, early in the morning, for the presentation of famous yet passionate international Riva owners ready to compete: but not before they had received from the hands of an enthusiastic Lia Riva, promoter of the event, a Riva participation bag full of branded gifts from the same house and the other sponsors such Vins de Stars and Veuve Clicquot. And then the first GO, with the assistance of the YCM, starting from the port of Monaco for the first race of regularity, destination Cannes, on board of some of the most famous models: amongst many, the Aquariva, Rivarama, Aquarama, Bahamas, Vintage Riva, Ariston and the beautiful Virtus “Cheyenne”, captain Mr Christophe Navarre, President of Moët Hennessy which, as main sponsor of the event, it sparkled a cheerful yellow Veuve Clicquot every moment of the two days. Participants from Brazil to Japan, England and Italy, along with invited representatives of the press and sponsors such as Vertu, an icon of high-end mobile smartphone combined with Riva to represent this race full of surprises, finally reached Cannes to finish with a mooring test won by Rivale “Vintag”. That was the perfect time to relax with a drink and appetizers offered in the offices Riva Cannes Boat Service between glasses of Veuve Clicquot and Bellini to Paese dei Balocchi, which is active in the selection of the best of Italian cuisine and the author also of lunch box full of specialties donated to each participant with a gift bag of Bellini. Delights ready to bring on board again, this time to head to the beautiful Iles de Lérins, islands not far from Cannes, where each participating boat has stopped for a picnic and some dip in the waters of Caribbean atmosphere. Pause and relax followed by a return to Saint-Tropez at full speed: just enough time to run on the Riva trophy 2014

Range Rover made available by Map Auto Land Rover to reach the centre of the village, to dress up with the most colourful and cheerful tones every outfit had to offer in view of an evening appointment: the special Brazilian Night. To astonish owners and guests, at Plage Des Jumeaux decorated with refined décor marinière of sublime furniture Roche Bobois, all the best of South American inspiration: caipirinha cocktail and drink in coconuts, typical taste of Brazilian cuisine but especially a scenario enlivened by glittering samba dancers and capoeira talents, who anticipated the dinner time with the first shows to the sound of Brazilian live music. A dress code observed by triumphant hairstyles with flowers and fruits, shirts and t-shirts with the chromatic yellow-green, cascades of flowers and colourful veils ... culminating in carnival costumes shown by the Samba dancers at the end of the evening, when guests have been dragged in an exotic and bold dance contest. The next day, Saturday, September the 6th, a morning of fun in Saint-Tropez was just the prelude to such a gathering in the square outside the office Riva set up for a brunch organized once again by Il Paese dei Balocchi. Italian delicacies freshly prepared, handled by a culinary contest organized in great secrecy in the offices Riva St Tropez. A convivial meeting, prior to a return of much charm to Monte Carlo, enlivened by the expected and anticipated contest of elegance: Back to the 60s in St Tropez, between fashion inspirations that have made compelling the contestants of each boat. A style contest celebrated later in the final round, with a gala cocktail in the enchanting surroundings of the Yacht Club de Monaco, on the top floor in a terrace with lounge bar decorated in pure style Riva. Amongst woods and walls of photographs created to celebrate the most important moments in the history of the brand, within the Aquarama Lounge space, sponsor Vertu and Repossi have had the opportunity to show the public the beauty of precious jewelery and mobile phones of Mils et un Nuit. Under a stellar sky and a charming outdoor recreated as the deck of a boat, spearhead of the same Yacht Club de Monaco, the awards ceremony animated by the soft voice of Maurizio di Maggio, saw again at the forefront Lia Riva, with the presence of Ferretti Group Ceo Mr Galassi , delivering great prizes: a dedicated naval contest, along with winners in the field of dance and elegance, to the first prize winner, the wonderful Acqua Di Gioia Ariston, captained by Mr Fukuda, awarded with a model offered by Vertu, the extraordinary Signature Pure Navy Touch. Certainly not least also the weekend Veuve Clicquot offered for the Prize multitasking performance by the same Monsieur Navarre and his wife, but also the bicycle customized Riva Monaco Boat Service and designed by Stefano Conticelli (already the author of a Vespa customized Riva as well as leather bracelets offered to each guest of the Riva Trophy), high-end beauty products by Medicallife and a weekend in the charming boutique hotel Poseidonion of Spetses. A trip around the world, including boats and rewards of charm, made waves on the coast of France’s most elegant but especially in the waters of imagination ... chasing the magic of Riva.