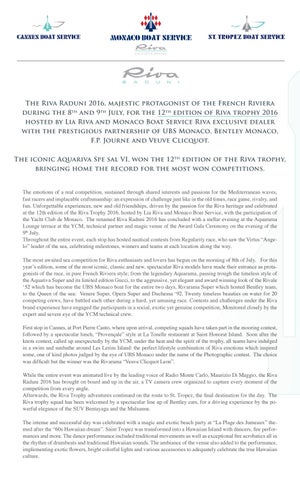 The Riva Raduni 2016, majestic protagonist of the French Riviera during the 8th and 9th July, for the 12th edition of Riva trophy 2016 hosted by Lia Riva and Monaco Boat Service Riva exclusive dealer with the prestigious partnership of UBS Monaco, Bentley Monaco, F.P. Journe and Veuve Clicquot. The iconic Aquariva Spe sal VI, won the 12th edition of the Riva trophy, bringing home the record for the most won competitions.

The emotions of a real competition, sustained through shared interests and passions for the Mediterranean waves, fast racers and implacable craftsmanship: an expression of challenge just like in the old times, race game, rivalry, and fun. Unforgettable experiences, new and old friendships, driven by the passion for the Riva heritage and celebrated at the 12th edition of the Riva Trophy 2016, hosted by Lia Riva and Monaco Boat Service, with the participation of the Yacht Club de Monaco. The renamed Riva Raduni 2016 has concluded with a stellar evening at the Aquarama Lounge terrace at the YCM, technical partner and magic venue of the Award Gala Ceremony on the evening of the 9th July. Throughout the entire event, each stop has hosted nautical contests from Regularity race, who saw the Virtus “Angelo” leader of the sea, celebrating milestones, winners and teams at each location along the way. The most awaited sea competition for Riva enthusiasts and lovers has begun on the morning of 8th of July. For this year’s edition, some of the most iconic, classic and new, spectacular Riva models have made their entrance as protagonists of the race, in pure French Riviera style; from the legendary Aquarama, passing trough the timeless style of the Aquariva Super and its limited edition Gucci, to the aggressive, yet elegant and award winning look of the Rivale ‘52 which has become the UBS Monaco boat for the entire two days, Rivarama Super which hosted Bentley team, to the Queen of the sea: Venere Super, Opera Super and Duchessa ‘92. Twenty timeless beauties on water for 20 competing crews, have battled each other during a hard, yet amusing race. Contests and challenges under the Riva brand experience have engaged the participants in a social, exotic yet genuine competition, Monitored closely by the expert and severe eye of the YCM technical crew. First stop in Cannes, at Port Pierre Canto, where upon arrival, competing squads have taken part in the mooring contest, followed by a spectacular lunch, “Provençale” style at La Tonelle restaurant at Saint Honorat Island. Soon after the knots contest, called up unexpectedly by the YCM, under the heat and the spirit of the trophy, all teams have indulged in a swim and sunbathe around Les Lerins Island: the perfect lifestyle combination of Riva emotions which inspired some, one of kind photos judged by the eye of UBS Monaco under the name of the Photographic contest. The choice was difficult but the winner was the Rivarama “Veuve Clicquot Leon”. While the entire event was animated live by the leading voice of Radio Monte Carlo, Maurizio Di Maggio, the Riva Raduni 2016 has brought on board and up in the air, a TV camera crew organized to capture every moment of the competition from every angle. Afterwards, the Riva Trophy adventures continued on the route to St. Tropez, the final destination for the day. The Riva trophy squad has been welcomed by a spectacular line up of Bentley cars, for a driving experience by the powerful elegance of the SUV Bentayaga and the Mulsanne. The intense and successful day was celebrated with a magic and exotic beach party at “La Plage des Jumeaux” themed after the “60s Hawaiian dream”. Saint Tropez was transformed into a Hawaiian Island with dancers, fire performances and more. The dance performance included traditional movements as well as exceptional fire acrobatics all in the rhythm of drumbeats and traditional Hawaiian sounds. The ambiance of the venue also added to the performance, implementing exotic flowers, bright colorful lights and various accessories to adequately celebrate the true Hawaiian culture.

On Saturday the 9th of July after a leisured morning tour at the St Tropez “Marché Provençale”, contestants have been accompanied with brunch at the brand new St. Tropez Boat Service Riva Exclusive Dealer office, by the Port De Saint-Tropez. The most eccentric of the contest, the Elegance contest, has made its entrance at the St. Tropez Port bay, under the theme of flowers named “Flower Power in Past, Present, Future”, the winner was the Mercurius “Bibi” who had created a flower garden around the amazing boat. The final highlight of the day concluded with the Award Prize Giving ceremony at the magnificent venue of the YCM. Riva enthusiasts celebrated the collected experiences while reminiscing the outstanding craftsmanship and heritage of the Riva. Following a beautiful dinner and social moment where partners have been able to share their experiences, congratulating for the great accomplishment and for the stunning event. Finally, the Riva Trophy 2016 Award Ceremony concluded by naming the winner teams and handing out the carefully selected and highly anticipated, one of a kind prizes, reaching from unique holiday break, to ultimate “money can’t buy experiences” and limited edition Riva trophy prizes. Lia Riva, supported by the voice of Di Maggio, called up each participant to handle a personalized photo that has captured the best moment of the respective boat, form the owners to the event partners. Following, each winner in the respective category has taken the stage: The unbeaten Aquariva Spe sa lVI of captained by Ms and Mr Cortez de Lobao has been proclaimed the winner of the Riva trophy 2016, taking home two limited edition watches offered by luxury Swiss watchmaker F.P Journe, official partner of this year’s edition. In all its originality and majestic organization, the new edition of the Riva Raduni 2016, continues to be the ideal rendez-vous to admire the most beautiful yachts of the historic Italian shipyard, reaching from the classic designs to the latest models, mesmerizing and reuniting Riva lovers and aficionados with a common and profound passion for craft and heritage. Two full days with the sexiest floating objects in the world, designed to combine beauty and nature “joie de vivre” and authentic emotions, lived through the eyes of the Riva universe.