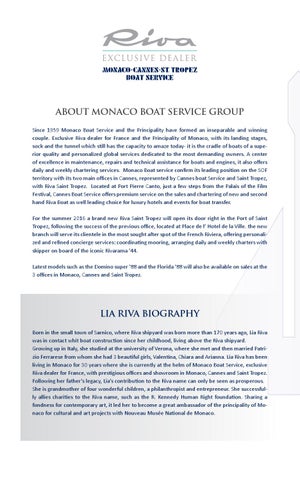 ABOUT MONACO BOAT SERVICE GROUP Since 1959 Monaco Boat Service and the Principality have formed an inseparable and winning couple. Exclusive Riva dealer for France and the Principality of Monaco, with its landing stages, sock and the tunnel which still has the capacity to amaze today- it is the cradle of boats of a superior quality and personalized global services dedicated to the most demanding owners. A center of excellence in maintenance, repairs and technical assistance for boats and engines, it also offers daily and weekly chartering services. Monaco Boat service confirm its leading position on the SOF territory with its two main offices in Cannes, represented by Cannes boat Service and Saint Tropez, with Riva Saint Tropez. Located at Port Pierre Canto, just a few steps from the Palais of the Film Festival, Cannes Boat Service offers premium service on the sales and chartering of new and second hand Riva Boat as well leading choice for luxury hotels and events for boat transfer. For the summer 2016 a brand new Riva Saint Tropez will open its door right in the Port of Saint Tropez, following the success of the previous office, located at Place de l’ Hotel de la Ville. the new branch will serve its clientele in the most sought after spot of the French Riviera, offering personalized and refined concierge services: coordinating mooring, arranging daily and weekly charters with skipper on board of the iconic Rivarama ’44. Latest models such as the Domino super ’88 and the Florida ’88 will also be available on sales at the 3 offices in Monaco, Cannes and Saint Tropez.

LIA RIVA BIOGRAPHY Born in the small town of Sarnico, where Riva shipyard was born more than 170 years ago, Lia Riva was in contact whit boat construction since her childhood, living above the Riva shipyard. Growing up in Italy, she studied at the university of Verona, where she met and then married Patrizio Ferrarese from whom she had 3 beautiful girls, Valentina, Chiara and Arianna. Lia Riva has been living in Monaco for 30 years where she is currently at the helm of Monaco Boat Service, exclusive Riva dealer for France, with prestigious offices and showroom in Monaco, Cannes and Saint Tropez. Following her father’s legacy, Lia’s contribution to the Riva name can only be seen as prosperous. She is grandmother of four wonderful children, a philanthropist and entrepreneur. She successfully allies charities to the Riva name, such as the R. Kennedy Human Right foundation. Sharing a fondness for contemporary art, it led her to become a great ambassador of the principality of Monaco for cultural and art projects with Nouveau Musée National de Monaco.

Monaco Boat Service 2016: From classic Riva retrospective to international cult appointment for Riva owners, Lia Riva gives another season of incredible initiatives and projects on the French Riviera Monte Carlo, April 2016 Following the artmonte-carlo partnership, MBS group will be involved in a series of unique and exclusive projects commencing with the Grand Prix Historique of Monaco; from the 13th to the 16th May 2016, Lia Riva will launch and present the historical exhibition of the Riva Racing boat. The retrospective will be exhibited at the Riva Tunnel, located at the heart of the Port Hercule of Monaco. A rare opportunity for worldwide collectors, classic motorsport fanatics and nostalgic enthusiast to admire the “masterpiece” of classic racing boats throughout the same weekend of Grand Prix Historique of Monaco where the most iconic cars will compete in a real sprint race. The exhibition, open to public from 10 am to 7 pm, will showcase some of the rarest Riva racing boat of the past times, On the evening of the 15th May, a cocktail -by invitation only- will see the launch of the book “Riva Corsa”. Meanwhile, right at the heart of Cannes Film festival 2016, Cannes Boat Service will activate for the first time ,a unique partnership with Majestic Plage 69, where the highest affluence of media and celebrities will be welcome “ on board” of the iconic Aquariva. A Riva lounge with the riva brand extension furniture will be placed at the Majestic pier as main point for interview and before jumping aboard of one of the most prestigious Riva boat. July 2016: The Riva Trophy is back in partnership with Veuve Clicquot, Bo Concept and the Yacht Club of Monaco. The Riva trophy is the most prestigious rendez-vous for Riva owners around the globe with 2 days of events, sport competition, combining with parties and celebration as well as new model launches. Taking part to the race are owners from all over Europe who made of Riva their greatest passion. Back at the historic route of Monaco - Cannes - Saint Tropez, the trophy is indeed confirmed as the international cult appointment of the French Riviera.