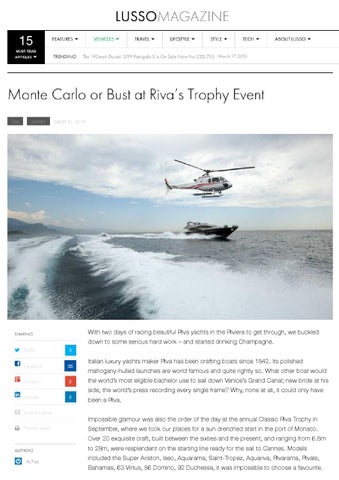 With two days of racing beautiful Riva yachts in the Riviera to get through, we buckled down to some serious hard work – and started drinking Champagne. Italian luxury yachts maker Riva has been crafting boats since 1842. Its polished mahogany-hulled launches are world famous and quite rightly so. What other boat would the world’s most eligible bachelor use to sail down Venice’s Grand Canal; new bride at his side, the world’s press recording every single frame? Why, none at all, it could only have been a Riva. Impossible glamour was also the order of the day at the annual Classic Riva Trophy in September, where we took our places for a sun drenched start in the port of Monaco. Over 20 exquisite craft, built between the sixties and the present, and ranging from 6.8m to 28m, were resplendent on the starting line ready for the sail to Cannes. Models included the Super Ariston, Iseo, Aquarama, Saint-Tropez, Aquariva, Rivarama, Rivale, Bahamas, 63 Virtus, 86 Domino, 92 Duchessa, it was impossible to choose a favourite.

Participants were beaming and waving like loons as the event kicked off and who could blame them with two days of sport, fun, glamour and decadence just beginning. With sponsors such as Moët Hennessy and Vertu, the Riva Trophy is one of the most exclusive nautical events on the calendar, and as it takes in three major playgrounds of yacht owners, this was one not to be missed. After an exhilarating start, our only issue of the day was choosing between Bellinis and Champagne as we sped through the waves, however, Lusso’s boat had Veuve Clicquot’s ambassador on board, our choice remained loyal. After arrival in Cannes, a mooring contest took place before we collected picnic lunches for the next leg to the beautiful Iles de Lérins, islands. We anchored en-route to dine and take a dip in the refreshing waters, an atmosphere more akin to the Caribbean than the Med. Then back for an evening’s stop in Saint Tropez, our entertainment a Brazilian themed extravaganza at sublime beachside La Plage des Jumeaux. A sumptuous feast enlivened by glittering samba dancers and capoeira talents, all to the sound of German Oom-pah bands (not really – it was live Brazilian music). Our following day’s treats began with a lively gathering in the square outside the Riva Saint-Tropez office with Italian delicacies freshly prepared by Il Paese dei Balocchi, and ceremoniously washed down with more Veuve Clicquot. We considered it a brunch of Champions, even though we weren’t actually sure if we’d won anything yet. Once aboard our craft, it was Monte Carlo or bust for the Riva Contest of Elegance. We presumed it meant the boats and not the passengers, but either way, we didn’t win.

By this point I had well and truly fallen in love with my gorgeous, racy Riva, and was already dreading leaving her behind. But leave her we did; the only consolation being an invitation to the final gala event at the dazzling and uber-exclusive Yacht Club de Monaco. Held on the top floor terrace, open to the harbour views, it’s designed to simulate the deck of a huge and very beautiful boat. Its lounge bar was decorated in pure Riva style, complete with iconic images of the brand through the ages – the most notable being the iconic shot of Brigitte Bardot on board a Riva in her 60s heyday. Riva’s Lia Riva and Alberto Galassi, CEO of the Ferretti Group (now owners of Riva) delivered the requisite speeches and handed out incredible prizes to the winners of the two days events. Repossi Jewels, Vertu, Veuve Clicquot and Vins du Star were some of the prizes awarded. But not to us. It was now definite that we hadn’t won anything at all. Riva however, had won a special place in our hearts. Our closing advice is simple. Buy a Riva boat, enter this event.

Words, Al Fox. Riva owners from across the globe along with sponsors such as Vertu and Veuve Clicquot gathered at the Yacht Club de Monaco to take part in the annual Classic Riva Trophy 2014 race, now in its seventh year. Organised by Lia Riva with the Monaco boat Service group and Style Lab, the group agency www.the-style-lab.com. Visit www.riva-trophy.com for details of this year’s event.