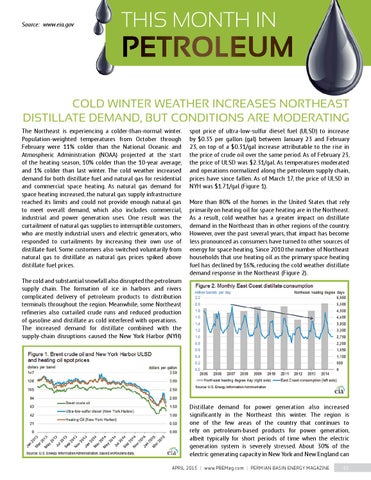 COLD WINTER WEATHER INCREASES NORTHEAST DISTILLATE DEMAND, BUT CONDITIONS ARE MODERATING The Northeast is experiencing a colder-than-normal winter. Population-weighted temperatures from October through February were 11% colder than the National Oceanic and Atmospheric Administration (NOAA) projected at the start of the heating season, 10% colder than the 10-year average, and 1% colder than last winter. The cold weather increased demand for both distillate fuel and natural gas for residential and commercial space heating. As natural gas demand for space heating increased, the natural gas supply infrastructure reached its limits and could not provide enough natural gas to meet overall demand, which also includes commercial, industrial and power generation uses. One result was the curtailment of natural gas supplies to interruptible customers, who are mostly industrial users and electric generators, who responded to curtailments by increasing their own use of distillate fuel. Some customers also switched voluntarily from natural gas to distillate as natural gas prices spiked above distillate fuel prices.

spot price of ultra-low-sulfur diesel fuel (ULSD) to increase by $0.35 per gallon (gal) between January 23 and February 23, on top of a $0.31/gal increase attributable to the rise in the price of crude oil over the same period. As of February 23, the price of ULSD was $2.31/gal. As temperatures moderated and operations normalized along the petroleum supply chain, prices have since fallen. As of March 17, the price of ULSD in NYH was $1.71/gal (Figure 1). More than 80% of the homes in the United States that rely primarily on heating oil for space heating are in the Northeast. As a result, cold weather has a greater impact on distillate demand in the Northeast than in other regions of the country. However, over the past several years, that impact has become less pronounced as consumers have turned to other sources of energy for space heating. Since 2010 the number of Northeast households that use heating oil as the primary space heating fuel has declined by 16%, reducing the cold weather distillate demand response in the Northeast (Figure 2).

The cold and substantial snowfall also disrupted the petroleum supply chain. The formation of ice in harbors and rivers complicated delivery of petroleum products to distribution terminals throughout the region. Meanwhile, some Northeast refineries also curtailed crude runs and reduced production of gasoline and distillate as cold interfered with operations. The increased demand for distillate combined with the supply-chain disruptions caused the New York Harbor (NYH)

Distillate demand for power generation also increased significantly in the Northeast this winter. The region is one of the few areas of the country that continues to rely on petroleum-based products for power generation, albeit typically for short periods of time when the electric generation system is severely stressed. About 30% of the electric generating capacity in New York and New England can APRIL 2015 | www.PBEMag.com | PERMIAN BASIN ENERGY MAGAZINE