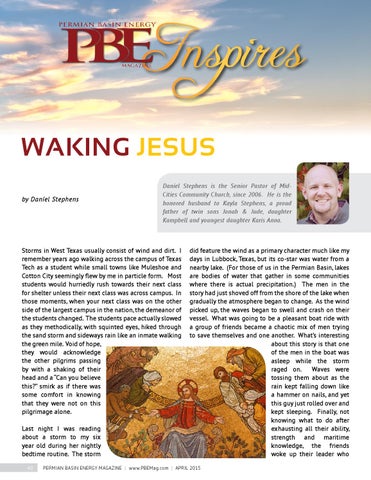 Daniel Stephens is the Senior Pastor of MidCities Community Church, since 2006. He is the honored husband to Kayla Stephens, a proud father of twin sons Jonah & Jude, daughter Kampbell and youngest daughter Karis Anna.

Storms in West Texas usually consist of wind and dirt. I remember years ago walking across the campus of Texas Tech as a student while small towns like Muleshoe and Cotton City seemingly flew by me in particle form. Most students would hurriedly rush towards their next class for shelter unless their next class was across campus. In those moments, when your next class was on the other side of the largest campus in the nation, the demeanor of the students changed. The students pace actually slowed as they methodically, with squinted eyes, hiked through the sand storm and sideways rain like an inmate walking the green mile. Void of hope, they would acknowledge the other pilgrims passing by with a shaking of their head and a “Can you believe this?” smirk as if there was some comfort in knowing that they were not on this pilgrimage alone. Last night I was reading about a storm to my six year old during her nightly bedtime routine. The storm 40

did feature the wind as a primary character much like my days in Lubbock, Texas, but its co-star was water from a nearby lake. (For those of us in the Permian Basin, lakes are bodies of water that gather in some communities where there is actual precipitation.) The men in the story had just shoved off from the shore of the lake when gradually the atmosphere began to change. As the wind picked up, the waves began to swell and crash on their vessel. What was going to be a pleasant boat ride with a group of friends became a chaotic mix of men trying to save themselves and one another. What’s interesting about this story is that one of the men in the boat was asleep while the storm raged on. Waves were tossing them about as the rain kept falling down like a hammer on nails, and yet this guy just rolled over and kept sleeping. Finally, not knowing what to do after exhausting all their ability, strength and maritime knowledge, the friends woke up their leader who