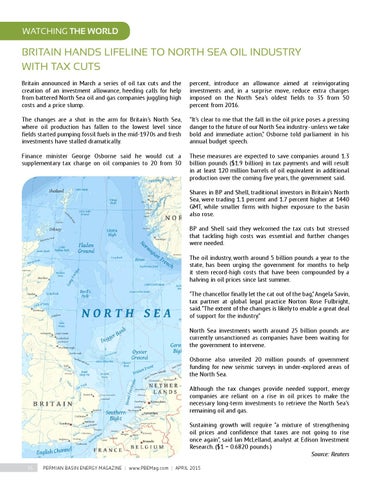 percent, introduce an allowance aimed at reinvigorating investments and, in a surprise move, reduce extra charges imposed on the North Sea's oldest fields to 35 from 50 percent from 2016.

The changes are a shot in the arm for Britain's North Sea, where oil production has fallen to the lowest level since fields started pumping fossil fuels in the mid-1970s and fresh investments have stalled dramatically.

"It's clear to me that the fall in the oil price poses a pressing danger to the future of our North Sea industry - unless we take bold and immediate action," Osborne told parliament in his annual budget speech.

These measures are expected to save companies around 1.3 billion pounds ($1.9 billion) in tax payments and will result in at least 120 million barrels of oil equivalent in additional production over the coming five years, the government said. Shares in BP and Shell, traditional investors in Britain's North Sea, were trading 1.1 percent and 1.7 percent higher at 1440 GMT, while smaller firms with higher exposure to the basin also rose. BP and Shell said they welcomed the tax cuts but stressed that tackling high costs was essential and further changes were needed. The oil industry, worth around 5 billion pounds a year to the state, has been urging the government for months to help it stem record-high costs that have been compounded by a halving in oil prices since last summer. "The chancellor finally let the cat out of the bag," Angela Savin, tax partner at global legal practice Norton Rose Fulbright, said. "The extent of the changes is likely to enable a great deal of support for the industry." North Sea investments worth around 25 billion pounds are currently unsanctioned as companies have been waiting for the government to intervene. Osborne also unveiled 20 million pounds of government funding for new seismic surveys in under-explored areas of the North Sea. Although the tax changes provide needed support, energy companies are reliant on a rise in oil prices to make the necessary long-term investments to retrieve the North Sea's remaining oil and gas. Sustaining growth will require "a mixture of strengthening oil prices and confidence that taxes are not going to rise once again", said Ian McLelland, analyst at Edison Investment Research. ($1 = 0.6820 pounds.) Source: Reuters