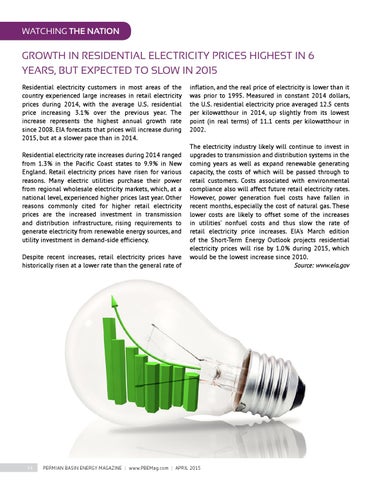 inflation, and the real price of electricity is lower than it was prior to 1995. Measured in constant 2014 dollars, the U.S. residential electricity price averaged 12.5 cents per kilowatthour in 2014, up slightly from its lowest point (in real terms) of 11.1 cents per kilowatthour in 2002. The electricity industry likely will continue to invest in upgrades to transmission and distribution systems in the coming years as well as expand renewable generating capacity, the costs of which will be passed through to retail customers. Costs associated with environmental compliance also will affect future retail electricity rates. However, power generation fuel costs have fallen in recent months, especially the cost of natural gas. These lower costs are likely to offset some of the increases in utilities' nonfuel costs and thus slow the rate of retail electricity price increases. EIA's March edition of the Short-Term Energy Outlook projects residential electricity prices will rise by 1.0% during 2015, which would be the lowest increase since 2010. Source: www.eia.gov