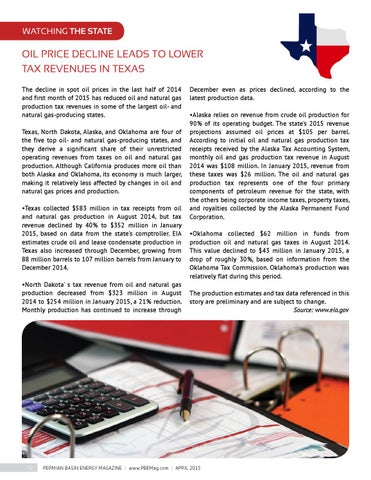 December even as prices declined, according to the latest production data. •Alaska relies on revenue from crude oil production for 90% of its operating budget. The state's 2015 revenue projections assumed oil prices at $105 per barrel. According to initial oil and natural gas production tax receipts received by the Alaska Tax Accounting System, monthly oil and gas production tax revenue in August 2014 was $108 million. In January 2015, revenue from these taxes was $26 million. The oil and natural gas production tax represents one of the four primary components of petroleum revenue for the state, with the others being corporate income taxes, property taxes, and royalties collected by the Alaska Permanent Fund Corporation. •Oklahoma collected $62 million in funds from production oil and natural gas taxes in August 2014. This value declined to $43 million in January 2015, a drop of roughly 30%, based on information from the Oklahoma Tax Commission. Oklahoma's production was relatively flat during this period. The production estimates and tax data referenced in this story are preliminary and are subject to change. Source: www.eia.gov