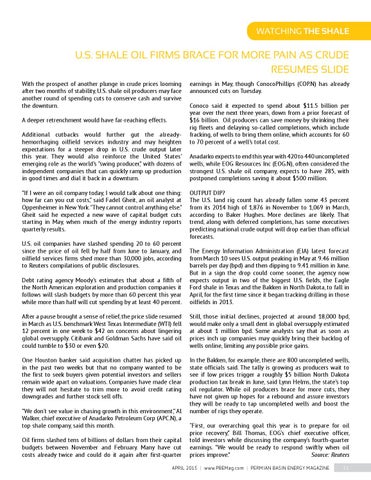 U.S. SHALE OIL FIRMS BRACE FOR MORE PAIN AS CRUDE RESUMES SLIDE With the prospect of another plunge in crude prices looming after two months of stability, U.S. shale oil producers may face another round of spending cuts to conserve cash and survive the downturn. A deeper retrenchment would have far-reaching effects. Additional cutbacks would further gut the alreadyhemorrhaging oilfield services industry and may heighten expectations for a steeper drop in U.S. crude output later this year. They would also reinforce the United States' emerging role as the world's "swing producer," with dozens of independent companies that can quickly ramp up production in good times and dial it back in a downturn. "If I were an oil company today, I would talk about one thing: how far can you cut costs," said Fadel Gheit, an oil analyst at Oppenheimer in New York. "They cannot control anything else." Gheit said he expected a new wave of capital budget cuts starting in May, when much of the energy industry reports quarterly results. U.S. oil companies have slashed spending 20 to 60 percent since the price of oil fell by half from June to January, and oilfield services firms shed more than 30,000 jobs, according to Reuters compilations of public disclosures.

earnings in May, though ConocoPhillips (COP.N) has already announced cuts on Tuesday. Conoco said it expected to spend about $11.5 billion per year over the next three years, down from a prior forecast of $16 billion. Oil producers can save money by shrinking their rig fleets and delaying so-called completions, which include fracking, of wells to bring them online, which accounts for 60 to 70 percent of a well's total cost. Anadarko expects to end this year with 420 to 440 uncompleted wells, while EOG Resources Inc (EOG.N), often considered the strongest U.S. shale oil company, expects to have 285, with postponed completions saving it about $500 million. OUTPUT DIP? The U.S. land rig count has already fallen some 43 percent from its 2014 high of 1,876 in November to 1,069 in March, according to Baker Hughes. More declines are likely. That trend, along with deferred completions, has some executives predicting national crude output will drop earlier than official forecasts.

Debt rating agency Moody's estimates that about a fifth of the North American exploration and production companies it follows will slash budgets by more than 60 percent this year while more than half will cut spending by at least 40 percent.

The Energy Information Administration (EIA) latest forecast from March 10 sees U.S. output peaking in May at 9.46 million barrels per day (bpd) and then dipping to 9.41 million in June. But in a sign the drop could come sooner, the agency now expects output in two of the biggest U.S. fields, the Eagle Ford shale in Texas and the Bakken in North Dakota, to fall in April, for the first time since it began tracking drilling in those oilfields in 2013.

After a pause brought a sense of relief, the price slide resumed in March as U.S. benchmark West Texas Intermediate (WTI) fell 12 percent in one week to $42 on concerns about lingering global oversupply. Citibank and Goldman Sachs have said oil could tumble to $30 or even $20.

Still, those initial declines, projected at around 18,000 bpd, would make only a small dent in global oversupply estimated at about 1 million bpd. Some analysts say that as soon as prices inch up companies may quickly bring their backlog of wells online, limiting any possible price gains.

One Houston banker said acquisition chatter has picked up in the past two weeks but that no company wanted to be the first to seek buyers given potential investors and sellers remain wide apart on valuations. Companies have made clear they will not hesitate to trim more to avoid credit rating downgrades and further stock sell offs.

In the Bakken, for example, there are 800 uncompleted wells, state officials said. The tally is growing as producers wait to see if low prices trigger a roughly $5 billion North Dakota production tax break in June, said Lynn Helms, the state's top oil regulator. While oil producers brace for more cuts, they have not given up hopes for a rebound and assure investors they will be ready to tap uncompleted wells and boost the number of rigs they operate.

"We don’t see value in chasing growth in this environment," Al Walker, chief executive of Anadarko Petroleum Corp (APC.N), a top shale company, said this month. Oil firms slashed tens of billions of dollars from their capital budgets between November and February. Many have cut costs already twice and could do it again after first-quarter

“First, our overarching goal this year is to prepare for oil price recovery," Bill Thomas, EOG’s chief executive officer, told investors while discussing the company’s fourth-quarter earnings. "We would be ready to respond swiftly when oil prices improve." Source: Reuters