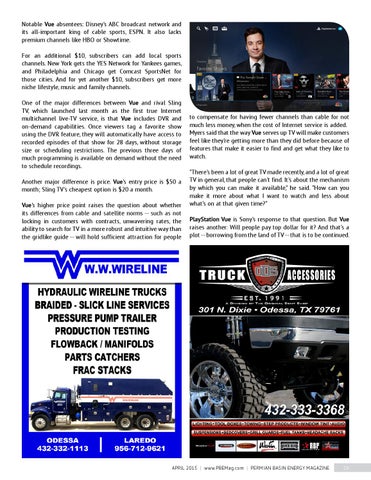 Notable Vue absentees: Disney's ABC broadcast network and its all-important king of cable sports, ESPN. It also lacks premium channels like HBO or Showtime. For an additional $10, subscribers can add local sports channels. New York gets the YES Network for Yankees games, and Philadelphia and Chicago get Comcast SportsNet for those cities. And for yet another $10, subscribers get more niche lifestyle, music and family channels. One of the major differences between Vue and rival Sling TV, which launched last month as the first true Internet multichannel live-TV service, is that Vue includes DVR and on-demand capabilities. Once viewers tag a favorite show using the DVR feature, they will automatically have access to recorded episodes of that show for 28 days, without storage size or scheduling restrictions. The previous three days of much programming is available on demand without the need to schedule recordings. Another major difference is price. Vue's entry price is $50 a month; Sling TV's cheapest option is $20 a month. Vue's higher price point raises the question about whether its differences from cable and satellite norms -- such as not locking in customers with contracts, unwavering rates, the ability to search for TV in a more robust and intuitive way than the gridlike guide -- will hold sufficient attraction for people

to compensate for having fewer channels than cable for not much less money, when the cost of Internet service is added. Myers said that the way Vue serves up TV will make customers feel like they're getting more than they did before because of features that make it easier to find and get what they like to watch. "There's been a lot of great TV made recently, and a lot of great TV in general, that people can't find. It's about the mechanism by which you can make it available," he said. "How can you make it more about what I want to watch and less about what's on at that given time?" PlayStation Vue is Sony's response to that question. But Vue raises another: Will people pay top dollar for it? And that's a plot -- borrowing from the land of TV -- that is to be continued.