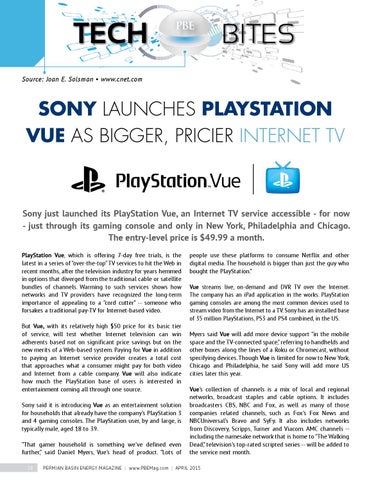 Sony just launched its PlayStation Vue, an Internet TV service accessible - for now - just through its gaming console and only in New York, Philadelphia and Chicago. The entry-level price is $49.99 a month. PlayStation Vue, which is offering 7-day free trials, is the latest in a series of "over-the-top" TV services to hit the Web in recent months, after the television industry for years hemmed in options that diverged from the traditional cable or satellite bundles of channels. Warming to such services shows how networks and TV providers have recognized the long-term importance of appealing to a "cord cutter" -- someone who forsakes a traditional pay-TV for Internet-based video. But Vue, with its relatively high $50 price for its basic tier of service, will test whether Internet television can win adherents based not on significant price savings but on the new merits of a Web-based system. Paying for Vue in addition to paying an Internet service provider creates a total cost that approaches what a consumer might pay for both video and Internet from a cable company. Vue will also indicate how much the PlayStation base of users is interested in entertainment coming all through one source. Sony said it is introducing Vue as an entertainment solution for households that already have the company's PlayStation 3 and 4 gaming consoles. The PlayStation user, by and large, is typically male, aged 18 to 39. "That gamer household is something we've defined even further," said Daniel Myers, Vue's head of product. "Lots of 28

people use these platforms to consume Netflix and other digital media. The household is bigger than just the guy who bought the PlayStation." Vue streams live, on-demand and DVR TV over the Internet. The company has an iPad application in the works. PlayStation gaming consoles are among the most common devices used to stream video from the Internet to a TV. Sony has an installed base of 35 million PlayStations, PS3 and PS4 combined, in the US. Myers said Vue will add more device support "in the mobile space and the TV-connected space," referring to handhelds and other boxes along the lines of a Roku or Chromecast, without specifying devices. Though Vue is limited for now to New York, Chicago and Philadelphia, he said Sony will add more US cities later this year. Vue's collection of channels is a mix of local and regional networks, broadcast staples and cable options. It includes broadcasters CBS, NBC and Fox, as well as many of those companies related channels, such as Fox's Fox News and NBCUniversal's Bravo and SyFy. It also includes networks from Discovery, Scripps, Turner and Viacom. AMC channels -including the namesake network that is home to "The Walking Dead," television's top-rated scripted series -- will be added to the service next month.