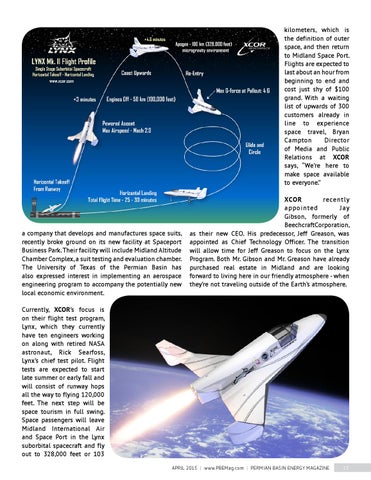 kilometers, which is the definition of outer space, and then return to Midland Space Port. Flights are expected to last about an hour from beginning to end and cost just shy of $100 grand. With a waiting list of upwards of 300 customers already in line to experience space travel, Bryan Campton Director of Media and Public Relations at XCOR says, “We’re here to make space available to everyone.”

a company that develops and manufactures space suits, recently broke ground on its new facility at Spaceport Business Park. Their facility will include Midland Altitude Chamber Complex, a suit testing and evaluation chamber. The University of Texas of the Permian Basin has also expressed interest in implementing an aerospace engineering program to accompany the potentially new local economic environment.

recently XCOR appointed Jay Gibson, formerly of BeechcraftCorporation, as their new CEO. His predecessor, Jeff Greason, was appointed as Chief Technology Officer. The transition will allow time for Jeff Greason to focus on the Lynx Program. Both Mr. Gibson and Mr. Greason have already purchased real estate in Midland and are looking forward to living here in our friendly atmosphere - when they’re not traveling outside of the Earth’s atmosphere.

Currently, XCOR’s focus is on their flight test program, Lynx, which they currently have ten engineers working on along with retired NASA astronaut, Rick Searfoss, Lynx’s chief test pilot. Flight tests are expected to start late summer or early fall and will consist of runway hops all the way to flying 120,000 feet. The next step will be space tourism in full swing. Space passengers will leave Midland International Air and Space Port in the Lynx suborbital spacecraft and fly out to 328,000 feet or 103 APRIL 2015 | www.PBEMag.com | PERMIAN BASIN ENERGY MAGAZINE