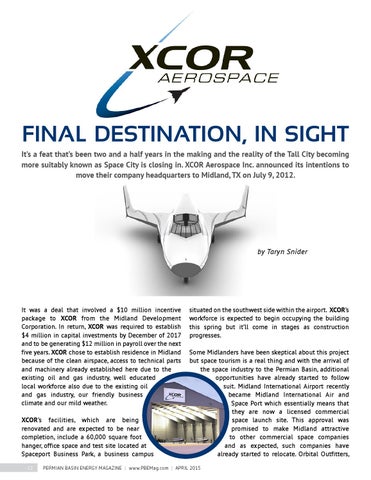 FINAL DESTINATION, IN SIGHT It’s a feat that’s been two and a half years in the making and the reality of the Tall City becoming more suitably known as Space City is closing in. XCOR Aerospace Inc. announced its intentions to move their company headquarters to Midland, TX on July 9, 2012.

It was a deal that involved a $10 million incentive package to XCOR from the Midland Development Corporation. In return, XCOR was required to establish $4 million in capital investments by December of 2017 and to be generating $12 million in payroll over the next five years. XCOR chose to establish residence in Midland because of the clean airspace, access to technical parts and machinery already established here due to the existing oil and gas industry, well educated local workforce also due to the existing oil and gas industry, our friendly business climate and our mild weather. XCOR’s facilities, which are being renovated and are expected to be near completion, include a 60,000 square foot hanger, office space and test site located at Spaceport Business Park, a business campus 12

situated on the southwest side within the airport. XCOR’s workforce is expected to begin occupying the building this spring but it’ll come in stages as construction progresses. Some Midlanders have been skeptical about this project but space tourism is a real thing and with the arrival of the space industry to the Permian Basin, additional opportunities have already started to follow suit. Midland International Airport recently became Midland International Air and Space Port which essentially means that they are now a licensed commercial space launch site. This approval was promised to make Midland attractive to other commercial space companies and as expected, such companies have already started to relocate. Orbital Outfitters,