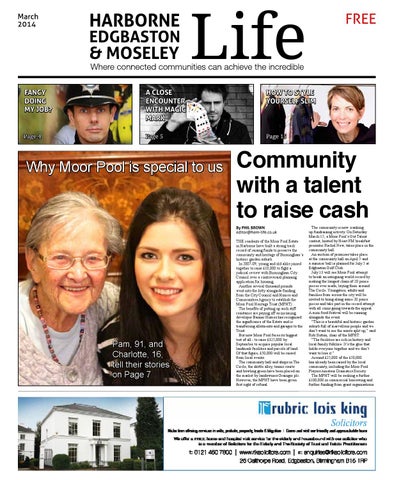 A CLOSE ENCOUNTER WITH MAGIC MARK

HOW TO STYLE YOURSELF SLIM

Why Moor Pool is special to us

Community with a talent to raise cash

THE residents of the Moor Pool Estate in Harborne have built a strong track record of raising funds to preserve the community and heritage of Birmingham’s historic garden suburb. In 2007-09, young and old alike joined together to raise £10,000 to fight a judicial review with Birmingham City Council over a controversial planning application for housing. Another several thousand pounds went into the kitty alongside funding from the City Council and Homes and Communities Agency to establish the Moor Pool Heritage Trust (MPHT). The benefits of putting up such stiff resistance are paying off as incoming developer Banner Homes has recognised the significance of the Estate and is transferring allotments and garages to the Trust. But now Moor Pool faces its biggest test of all - to raise £325,000 by September to acquire popular local landmark facilities and parcels of land. Of that figure, £50,000 will be raised from local events. The community hall and shops in The Circle, the skittle alley, tennis courts and bowling green have been placed on the market by landowners Grainger plc. However, the MPHT have been given first right of refusal.

The community is now cranking up fundraising activity. On Saturday March 15, a Moor Pool’s Got Talent contest, hosted by Heart FM breakfast presenter Rachel New, takes place in the community hall. An auction of promises takes place at the community hall on April 5 and a summer ball is planned for July 5 at Edgbaston Golf Club. July 13 will see Moor Pool attempt to break an intriguing world record by making the longest chain of 20 pence pieces ever made, laying them around The Circle. Youngsters, adults and families from across the city will be invited to bring along some 20 pence pieces and take part in the record attempt with all coins going towards the appeal. A mini food festival will be running alongside the event. “This is a beautiful and historic garden suburb full of marvellous people and we don’t want to see the assets split up,” said Rob Sutton, chair of the MPHT. “The facilities are rich in history and local family folklore. It’s the glue that holds everyone together and we don’t want to lose it.” Around £25,000 of the £50,000 has already been raised by the local community, including the Moor Pool Players Amateur Dramatics Society. The MPHT will be seeking a further £100,000 in commercial borrowing and further funding from grant organisations. 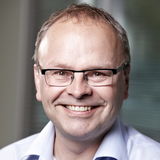 Where connected communities can achieve the incredible

Where connected communities can achieve the incredible