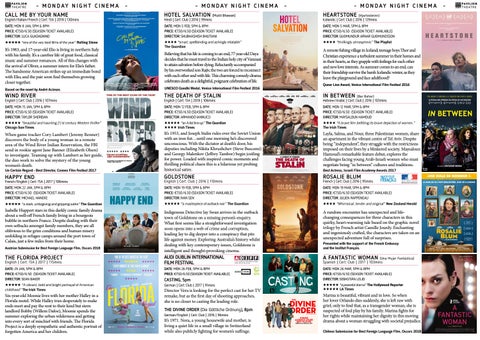 CALL ME BY YOUR NAME

★★★★★ “one of the very best films of the year” Rolling Stone

It’s 1983, and 17-year-old Elio is living in northern Italy with his family. It’s a carefree life of great food, classical music and summer romances. All of this changes with the arrival of Oliver, a summer intern for Elio’s father. The handsome American strikes up an immediate bond with Elio, and the pair soon find themselves growing closer together.

Believing that his life is coming to an end, 77 year-old Daya decides that he must travel to the Indian holy city of Varanasi to attain salvation before dying. Reluctantly accompanied by his overworked son Rajiv, the two are forced to reconnect with each other and with life. This charming comedy-drama celebrates death as a delightful, poignant celebration of life.

Based on the novel by André Aciman.

THE DEATH OF STALIN

A remote fishing village in Iceland; teenage boys Thor and Christian experience a turbulent summer in their homes and in their hearts, as they grapple with feelings for each other and new love interests. As summer comes to an end, can their friendship survive the harsh Icelandic winter, as they leave the playground and face adulthood? Queer Lion Award, Venice International Film Festival 2016 (Bar Bahar)

★★★★ “A brave film befitting its brave depiction of women.” The Irish Times

When game tracker Cory Lambert (Jeremy Renner) discovers the body of a young woman in a remote area of the Wind River Indian Reservation, the FBI send in rookie agent Jane Banner (Elizabeth Olsen) to investigate. Teaming up with Lambert as her guide, the duo work to solve the mystery of the young woman’s death.

Layla, Salma, and Nour, three Palestinian women, share an apartment in the vibrant centre of Tel Aviv. Despite being “independent”, they struggle with the restrictions imposed on their lives by a blinkered society. Maysaloun Hamoud’s remarkable feature debut, explores the challenges facing young Arab-Israeli women who must negotiate being “in between” cultures and traditions.

It’s 1953, and Joseph Stalin rules over the Soviet Union with an iron fist…until one morning he’s discovered unconscious. With the dictator at death’s door, his deputies including Nikita Khrushchev (Steve Buscemi) and Georgy Malenkov (Jeffrey Tambor) begin jostling for power. Loaded with inspired comic moments and thrilling political chaos this is a hilarious yet probing historical satire.

Indigenous Detective Jay Swan arrives in the outback town of Goldstone on a missing person’s enquiry. What first seems like a straightforward investigation soon opens into a web of crime and corruption, leading Jay to dig deeper into a conspiracy that pits life against money. Exploring Australia’s history whilst dealing with key contemporary issues, Goldstone is intelligent and thought-provoking cinema.

A random encounter has unexpected and lifechanging consequences for three characters in this quirky, heart-warming tale based on the graphic novel trilogy by French artist Camille Jourdy. Enchanting and ingeniously crafted, the characters are taken on an unexpected adventure full of surprises.

★★★★★ “a stark, unforgiving and gripping satire” The Guardian

Isabelle Huppert stars in this darkly comic family drama about a well-off French family living in a bourgeois bubble in northern France. Despite dealing with their own setbacks amongst family members, they are all oblivious to the grim conditions and human misery unfolding in refugee camps around the port town of Calais, just a few miles from their home. Austrian Submission for Best Foreign Language Film, Oscars 2018

★★★★★ “A vibrant, bold and bright portrayal of American

Six-year-old Moonie lives with her mother Halley in a Florida motel. While Halley tries desperately to make ends meet and pay the rent to their kind but stern landlord Bobby (Willem Dafoe), Moonie spends the summer exploring the urban wilderness and getting into every sort of mischief with friends. The Florida Project is a deeply sympathetic and authentic portrait of forgotten America and her children.

★★★★★ “a masterpiece of outback noir” The Guardian

Director Vera is looking for the perfect cast for her TV remake, but as the first day of shooting approaches, she is no closer to casting the leading role. THE DIVINE ORDER (Die Göttliche Ordnung), 8pm German/English | Cert: Club | 2016 | 96mins

It’s 1971. Nora, a young housewife and mother, is living a quiet life in a small village in Switzerland while also publicly fighting for women’s suffrage.

Presented with the support of the French Embassy and the Institut Français. (Una Mujer Fantástica)

Marina is beautiful, vibrant and in love. So when her lover Orlando dies suddenly, she is left raw with grief, only to find that, as a transgender woman, she is suspected of foul play by his family. Marina fights for her rights while maintaining her dignity in this moving drama about a woman struggling with societal prejudice. Chilean Submission for Best Foreign Language Film, Oscars 2018

The Drummer &amp; The Keeper

“a love letter to the teaching profession” Daily Express

Devoted primary school teacher Florence pours her heart and soul into her students each and every day. When she encounters disruptive student Sacha, and finds he has been abandoned by his mother, Florence vows to help him. However, Florence’s own life begins to fall apart as she struggles to balance the young boy’s plight along with her own frustrated son and an increasingly stressful job.

In the Name of Peace: John Hume in America

★★★★ “a textured, funny, eccentric piece of work.” The Irish Times

Christian is the successful but self-centred curator of a modern art museum. A few days before the opening of his new, prestigious exhibition, the controversial publicity campaign backfires, plunging Christian and his museum into existential crisis.Starring Elizabeth Moss &amp; Dominic West, this is no-holds-barred satire of the postmodern art world is surreal, funny and provocative. Palme d’Or, Cannes Film Festival 2017

Canaletto &amp; the Art of Venice

Set on the Northern Territory frontier in 1920s Australia, Sam, an Aboriginal farmhand murders a white man in self-defence. Forced to go on the run with his wife across the deadly outback, a search party is hot on their pursuit. Inspired by true events, this haunting, provocative and intelligent period western tells the tragic tale of tensions in the outback. Special Jury Prize, Venice Film Festival 2017

Reclusive railroad worker Tsanko stumbles across a pile of cash on the tracks and immediately calls in the authorities. Spying an opportunity, the transport ministry’s head of PR uses Tsanko to spin a feel-good story and divert attention from the corruption scandal engulfing her department. Best International Feature Film, Edinburgh International Film Festival 2017

It’s Not Yet Dark

SEASON TICKETS ONLY €80 Love film? Get a great deal with our Monday Night Cinema Season Ticket at the fantastic price of €80.00. 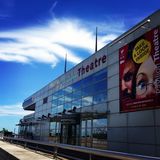