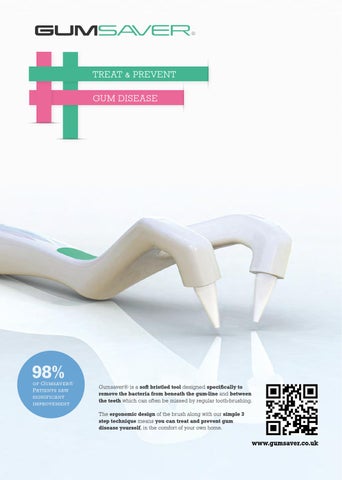 Gumsaver速 is a soft bristled tool designed specifically to remove the bacteria from beneath the gum-line and between the teeth which can often be missed by regular tooth-brushing. The ergonomic design of the brush along with our simple 3 step technique means you can treat and prevent gum disease yourself, in the comfort of your own home.

Gumsaver速 was invented by dentist Dr. Hani. Hani works in general practice at The Gallery Dentist, Leamington Spa, is a postgraduate supervisor at Warwick Dentistry and is a fellow of the IADFE.

The solution in the fight against gum disease

Making it easy to clean effectively

GUM DISEASE Almost 90% of adults in the UK have a degree of Gum Disease. Gingivitis is the easiest form of Gum Disease to treat, but if you leave it untreated it can develop into the more serious form of the disease known as Periodontitis.

HEALTH CHALLENGE Periodontal disease can be caused by improper brushing techniques and the presence of bacteria underneath the gum-line. Not only is periodontal disease a painful burden on the individual, it is also a significant public health challenge. Epidemiological studies confirm its links with systemic diseases such as Type II Diabetes, Cardiovascular and Cerebrovascular disease (1)(2). Periodontal disease is the leading cause of tooth-loss worldwide. Current estimates suggest that 90% of the adult dentate population are affected by inflammation of the gums and by periodontal pockets of 4mm depth at some stage in their lives (1). Current treatments for periodontal disease include scraping under the gums with a metal instrument. Such traditional treatments are associated with discomfort and have limited evidence for sustained efficacy (4).

Good gum health is the key to good general health. If you look after your gums you can prevent multiple health problems, ranging from bleeding gums, tooth-loss and bad breath to diabetes, stroke and heart disease (1)(2).

INTELLIGENT DESIGN THE SOLUTION IN THE FIGHT AGAINST GUM DISEASE We have designed the Gumsaver速 to make the task of looking after your gums and teeth simple. Gumsaver速 is proven to not only treat and prevent gum disease, but it will also improve oral health, prevent tooth loss and in some cases encourage bone re-generation. Gumsaver速 comprises of an ergonomic handle with twin heads, each end containing a tapered soft bristle set.

The bristle heads are angled towards each other, spaced-apart, providing a small clearance in which the inter-dental spaces are lined up during use.

Each cleaning tip acts as an alignment guide for the other, ensuring that the bristles are correctly angled into the recesses between the neighbouring teeth. An up and down motion will guide the heads under the gum line to remove bacteria rooted deep inside the inter-dental space.

After using the Gumsaver速 97.8% of patients returned at their 6 month review appointment with no serious signs of gum disease (5).

A PIONEERING TECHNIQUE MAKING IT EASY TO CLEAN EFFECTIVELY This is not just a brush, but a ground-breaking oral health system. Many people’s toothbrushing techniques fail to clean inter-dental spaces effectively. The Gumsaver® approach is different the ergonomic design empowers the individual to treat and prevent gum disease. The tapered bristle design coupled with the simple technique make it a much simpler task to locate and clean between the teeth and gum-line. The dental cleaning device is specifically designed to disrupt &amp; remove bacteria from the teeth under the gum-line, which is often missed by typical toothbrushing habits. With each Gumsaver® brush, a simple set of concise instructions are included. The user will also have access to an online video tutorial at:

Gumsaver® 3 Step Technique If its your first time, get in front of a mirror so you can see what you are doing

Place the brush over your teeth

Locate brush between two teeth and massage up and down below the gumline.

No back and forth motion is needed

THE PROOF PATIENT: Angela BEFORE GUMSAVER速

After 2 months the 10mm pocket is just 3mm which means the gum disease has been eradicated, i.e. a BPE Score of 0.

BPE Scores: These scores judge severity of gum disease according to how big the gaps are between the teeth and the gums. The larger the gaps the more receded the gums. This causes bleeding gums, bad breath &amp; tooth loss.

All Patients have severe gum disease prior to treatment

98% of the Gumsaver速 Group of patients went from severe disease to healthier gums within 6 months of treatment.

To assess the efficacy of the Gumsaver® system a study of 93 subjects was carried out. Each participant presented pocket depths of 3.5 - 10mm (BPE Score 3 or 4), which is a clear indication of periodontal disease. A control group of 47 subjects (19 male and 28 female) were given standard British Periodontal Society (BPS) recommended oral hygiene instructions, as well as traditional treatments including full mouth root planning, scaling and polishing. In addition to the standard BPS recommended treatment, the test group, which consisted of 46 subjects (22 male and 24 female), were also given instructions on how to use the Gumsaver® system.

Head of Dentistry, University of Warwick

“As you will see from [Dr. Hani’s] hypothesis ... there is much to hope for with regards to self efficacy. The burden of periodontal disease on an ever aging population means that treatments where patients could be given more effective self management of this condition is a very positive one. In light of recent studies and a believable mechanism linking oral bacterial burden to a number of systemic diseases, I feel we should be promoting this well reasoned argument towards sub-gingival brushing. This has fantastic potential to reduce morbidity both in the mouth and to potentially reduce impact on an individual’s general health.”

“I am happy to confirm that NHS Dentist has continued to provide a full hygienist service on the NHS for patients presenting with periodontal disease, despite the 2006 contract which effectively cut funding for all such treatments. We have done this by implementing the system advocated by Philip Owers&#39; subgingival oral hygiene instruction to our patients, because it is effective and in order to minimise the future financial burden to our practice and the NHS. This practice has treated over 80,000 NHS patients since we opened in 1999.”

JOE WAS SUFFERING FROM BLEEDING GUMS FOR OVER TEN YEARS. HE VISITED THE DENTIST &amp; HYGIENIST REGULARLY BUT PROBLEMS PERSISTED. JOE SAW RESULTS WITHIN WEEKS.

BEFORE GUMSAVER®: Bleeding gums RESULTS: No bleeding, no gum pockets

Joe Said: “...They have been absolutely fantastic. Seriously.... I haven&#39;t bled at all from one check up to the next!”

ANNA WAS ALSO SUFFERING FROM BLEEDING GUMS FOR OVER TEN YEARS. SHE FELT SHE HAD NEVER BEEN SHOWN HOW TO SOLVE THE PROBLEM.

Anna Said: “... I noticed less bleeding, tenderness and sensitivity... even when eating and drinking... they feel safe now.”

A brochure aimed at dental professionals prior to launch. 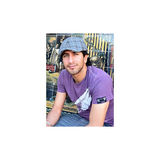