On the conflict between owning and sharing digital artworks 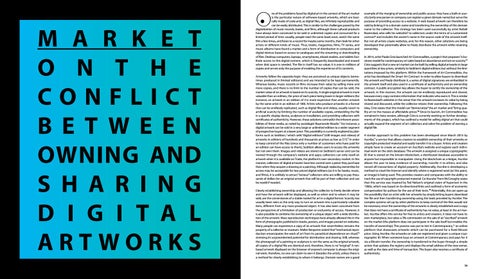 ne of the problems faced by digital art in the context of the art market is the particular nature of software-based artworks, which are basically made of code and, as digital files, are infinitely reproducible and can be easily distributed. This is similar to the challenges posed by the digitalization of music records, books, and films, although these cultural products have always been conceived to be sold in unlimited copies and consumed for a limited period of time: usually, people read the same book once, watch the same film a few times, and listen to a record for maybe some months, then look for other artists or different kinds of music. Thus, books, magazines, films, TV series, and music albums have found a market and a form of distribution in computers and digital devices based on access to catalogues and the streaming or downloading of files. Desktop computers, laptops, smartphones, ebook readers, and tablets facilitate access to this digital content, which is frequently downloaded and erased when disk space is needed. The file in itself has no value; it is one in millions of copies and serves only the purpose of enabling the experience of its contents. Artworks follow the opposite logic: they are perceived as unique objects (sometimes produced in limited editions) and are intended to be kept permanently. Whereas books, music records or films increase their value by selling more and more copies, and there is no limit to the number of copies that can be sold, the market value of an artwork is based on its scarcity. A single original artwork is more valuable than an edition, the price of each piece being lower in larger editions (for instance, an artwork in an edition of 3 is more expensive than another artwork by the same artist in an edition of 100). Artists who produce artworks in a format that can be endlessly replicated, such as digital files and videos, usually resort to artificial scarcity by limiting the number of available copies, embedding the file in a specific display device, sculpture or installation, and providing collectors with certificates of authenticity. However, these solutions contradict the inherent possibilities of these media, as noted by sociologist Raymonde Moulin.1 For instance, a digital artwork can be sold in a very large or unlimited edition to a wider segment of prospective buyers at a lower price. This possibility is currently explored by platforms such as Sedition,2 which sells “digital editions” (still images and videos) of artworks in editions of hundreds and thousands at prices as low as $15.3 In order to keep control of the files (since only a number of customers who have paid for an edition can have access to them), Sedition allows users to access the artworks but not own them. Images and videos are stored on Sedition’s server and can be viewed through the company’s website and apps; collectors can only resell an artwork when it is available on Trade, the platform’s own secondary market. In this manner, collectors of digital artworks have less control over a piece they purchase than when they acquire a drawing or a painting. Although replacing ownership for access may be acceptable for low priced digital editions (as it is for books, music, and films), it is unlikely to attract “serious” collectors who are willing to pay thousands of dollars for an original artwork that will be part of their collection and can be resold if needed. Clearly establishing ownership and allowing the collector to freely decide where and how the artwork will be displayed, as well as when and to whom it may be sold, are the cornerstones of a stable market for art in a digital format. Scarcity has usually been seen as the only way to turn an artwork into a particularly valuable item, different from any mass-produced object. It has also been conceived from the perspective of a limitation of production or exclusivity of access. However, it is also possible to combine the ownership of a unique object with a wide distribution of the artwork. Mass reproduction techniques have already allowed this in the form of photographs published in books, posters, and images posted on websites. Many people can experience a copy of an artwork that nevertheless remains the property of a collector or museum. Walter Benjamin stated that “mechanical reproduction emancipates the work of art from its parasitical dependence on ritual,”4 stressing its unprecedented potential for distribution and sharing. Still, whereas the photograph of a painting or sculpture is not the same as the original artwork, all copies of a digital file are identical and, therefore, there is no “original.” A netbased artwork displayed on the browser of anyone’s computer is always the original work, therefore, no one can claim to own it (besides the artist), unless there is a method for clearly establishing to whom it belongs. Domain names are a good

example of the merging of ownership and public access: they have a built-in scarcity (only one person or company can register a given domain name) but serve the purpose of providing access to a website. A web-based artwork can therefore be sold by linking it to a domain name and transferring the ownership of this domain name to the collector. This strategy has been used successfully by artist Rafaël Rozendaal, who sells his websites5 to collectors under the terms of a customized contract6 and includes the owner’s name in the source code of the artwork itself. But not all artists create websites, and, for this reason, other solutions are being developed that potentially allow to freely distribute the artwork while retaining ownership. In 2014, artist Paolo Cirio launched Art Commodities, a project that proposes “a business model for contemporary art sales based on abundance and not on scarcity.”7 Cirio suggests that a new art market can be built by selling digital artworks in large quantities at low prices, similarly to Sedition’s digital editions but without the limitations imposed by this platform. Within the framework of Art Commodities, the artist has developed the Smart Art Contract: in order to allow buyers to download the artwork and freely distribute it, a series of digital signatures are embedded in the artwork itself and also used in a certificate of authenticity and an ownership contract. A public encryption key allows the buyer to certify the ownership of the artwork. In this manner, the artwork can be endlessly reproduced and shared, because every copy contains information that indicates who owns it. This is similar to Rozendaal’s websites in the sense that the artwork increases its value by being shared and discussed, while the collector retains their ownership. Following this idea, Cirio states that this model can “democratize” the art market and “bring quality art to the masses at affordable prices.”8 Since its launch, Art Commodities has remained in beta version, although Cirio is currently working on further developments of this project, which has outlined a model for selling digital art that could actually expand the segment of art collectors and solve the problem of owning a digital file. A similar approach to this problem has been developed since March 2015 by Ascribe,9 a service that allows creators to establish ownership of their artworks or copyright-protected material and easily transfer it to a buyer. Artists and creators simply have to create an account on Ascribe’s website and register each individual work on the site’s database. The artwork is assigned a unique cryptographic ID that is stored on the bitcoin blockchain, a distributed database accessible to anyone but impossible to manipulate. Using the blockchain as a ledger, Ascribe allows the user to keep evidence of ownership, transfer it to others, and also record all transactions of digital property. Additionally, Ascribe is developing a method to crawl the Internet and identify where a registered work (at this point, an image) is being used. This provides creators and companies with the ability to track the use of copyright-protected material. Co-founder Trent McConaghy states that this service was inspired by Ted Nelson’s original vision of hypertext in the 1960s, which was based on bi-directional links and outlined a form of economic compensation for authors for the use of their texts. 10 Potentially, this can open up the possibility that an artist sells her artworks by simply letting buyers download the file and then transferring ownership using the tools provided by Ascribe. The complex systems set up by other platforms to keep control of the files would not be necessary since the ownership of the artworks is clearly established and a copy that does not have a certificate of authenticity has no value, at least in the art market. Ascribe offers this service for free to artists and creators. It does not have its own marketplace, but takes a 3% commission on the sale of an “ascribed” artwork on the market (the platform does not participate in the sale itself but enables the transfer of ownership). This process was put to test in Cointemporary,11 an online platform that showcases artworks which can be purchased for a fixed Bitcoin price. Using Ascribe, the artworks on sale are registered and given a unique cryptographic ID. When someone buys an artwork at Cointemporary and pays for it via a Bitcoin transfer, the ownership is transferred to the buyer through a simple action that updates the registry and displays the email address of the new owner, as well as the date and time of transaction. The buyer also receives a certificate of authenticity.

Ascribe offers a way to claim ownership of an artwork but cannot prevent the file from being downloaded or copied. Selling digital artworks must therefore rely on the value given to owning the artwork rather than just having access to it: whereas music, books, and films are pirated because consumers only want to experience the contents of the files and do not care about owning them, it is expected that collectors are not interested in artworks they can download but not own, because they are not “originals.” However, bringing art to the masses, as Paolo Cirio suggests, may lead to a different kind of collector, who may be interested in enjoying the artwork on a dedicated screen without caring about ownership. People who like art but do not care about investing in art may display artworks and any other content found on the Internet in a digital frame hung on a wall at home. This could either lead to artworks being massively sold in large editions (as intended by Sedition and other platforms) or pirated like any other copyrightprotected content with ample demand. Ascribe is developing tools that could track the use of any image, video, audio, text, and 3D file registered on their site. This could create an “ownership layer” on the internet, as proposed by McConaghy, although it may be difficult to keep track of content that is not published on an openly accessible website or social network. Ascribe solves one of the problems posed by the ownership of digital artworks and opens the possibility of a broader art market, in which a large segment of the public can access art in a digital for60

mat. This market, however, will have to follow different rules and face new challenges. Pau Waelder Pau Waelder is an art critic, curator, and researcher in digital art and culture. Among his latest projects are the conferences En_lloc (Now_Here) and Digital Culture (Fundacio Pilar i Joan Miro a Mallorca). As reviewer and editor, he has collaborated with several art magazines. He is New Media Editor at art.es magazine.

On the conflict between owning and sharing digital artworks 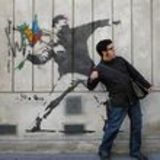