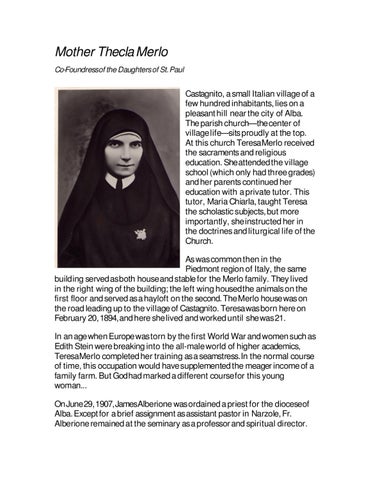 Castagnito, a small Italian village of a few hundred inhabitants, lies on a pleasant hill near the city of Alba. The parish churchâ&amp;#x20AC;&amp;#x201D;the center of village lifeâ&amp;#x20AC;&amp;#x201D;sits proudly at the top. At this church TeresaMerlo received the sacraments and religious education. She attended the village school (which only had three grades) and her parents continued her education with a private tutor. This tutor, Maria Chiarla, taught Teresa the scholastic subjects, but more importantly, she instructed her in the doctrines and liturgical life of the Church. As was common then in the Piedmont region of Italy, the same building served as both house and stable for the Merlo family. They lived in the right wing of the building; the left wing housed the animals on the first floor and served as a hayloft on the second. The Merlo house was on the road leading up to the village of Castagnito. Teresawas born here on February 20, 1894, and here she lived and worked until she was 21. In an age when Europe was torn by the first World War and women such as Edith Stein were breaking into the all-male world of higher academics, TeresaMerlo completed her training as a seamstress. In the normal course of time, this occupation would have supplemented the meager income of a family farm. But God had marked a different course for this young woman... On June 29, 1907, JamesAlberione was ordained a priest for the dioceseof Alba. Except for a brief assignment as assistant pastor in Narzole, Fr. Alberione remained at the seminary as a professor and spiritual director.

He quickly became known as &quot;the theologian.&quot; But germinating in his heart and mind was the desire &quot;to do something for the people of today.&quot; That &quot;something&quot; soon revealed itself as the apostolate of evangelization using the printed word, to be performed by consecrated men and women religious. This new form of evangelization Fr. Alberione dubbed &quot;the apostolate of the good press.&quot;

TeresaMerlo met Fr. JamesAlberione in the church of Sts. Cosmasand Damian on June 27, 1915. The meeting had been arranged by her brother, who was a seminarian at the time, and she was accompanied by her mother. Fr. Alberione had already heard of Teresa&#39;s desire to be a religious. Now, he invited her to join the group of young women he was forming at Alba with the aim of one day founding a feminine congregation dedicated to the apostolate of the press. This community would be parallel to the Society of St. Paul, the congregation of men which he had started a year before. With great faith, Teresasaid &quot;yes.&quot; Teresa&#39;s sewing skills were providential for the new community as they were only gradually able to begin the &quot;apostolate of the good press.&quot; In Alba, they opened a small shop of religious articles and booksâ&amp;#x20AC;&amp;#x201D;the tiny seed of the future book centers that the Daughters of St. Paul would open all over the world. But the women supported themselves by operating a small sewing school. In 1918, the women were invited by Fr. Alberione to move to the small city of Susaand take charge of the diocesan newspaper. He explained that this would involve the direction, composition, and printing of the paper; the women would learn the typographical skills from their brothers, the Society of St. Paul. The women named their little workshop the &quot;St. Paul Typography&quot; and placed it under the great apostle&#39;s patronage. It was here that the group became known as the Daughters of St. Paul. Four years later, the first nine members of the Daughters of St. Paul were allowed to make their perpetual professions in a private ceremony. Twenty-eight year old TeresaMerlo took the name Thecla, in honor of St. Thecla, the early follower of Paul. The women also received the title Maestra, in honor of Jesusthe Master. Maestra Thecla Merlo was appointed Superior General of the new community.

The difficulties which the little group encountered from society and from the Church&#39;s hierarchy were immense; who had ever imagined womenâ&amp;#x20AC;&amp;#x201D; never mind women religiousâ&amp;#x20AC;&amp;#x201D;operating printing pressesand composing books and newspapers? The year the sisters made their perpetual profession, Fr. Alberione wrote: &quot;For the Daughters, the vocation to the good press is one still to be created. God creates it, raises it up, confirms it, and brings it to fulfillment with his grace. It involves something new and therefore entails greater difficulties.&quot; In the following years, under Mother Thecla&#39;s guidance, the fledgling community expanded to 25 communities in Italy and had new foundations in Brazil, Argentina, and the United States. Mother Thecla remained Mother General until her death in 1964. During her lifetime she traveled around the world and under her direction the Daughters of St. Paul were established in every continent. Mother Thecla, in writing a circular letter to these early Daughters of St. Paul, conveyed her own vocational commitment: &quot;The power idea which must animate us is the thought of souls. This thought must goad us on. We must be concerned about how we are to reach people and bring them the Word of truth and salvation. How many souls never hear of God! Who will help them?&quot; Mother Thecla was certainly a woman both of her time and ahead of her time. She had a singular desire to reach the people of her day with the Word of truth and salvation. She courageously led the Daughters of St. Paul to the forefront of evangelization with each new form of media as it was developed. Embracing the press, radio, film, and TV, she wrote: &quot;Our Congregation will always be young, becauseit will make use of every new means to do good.&quot; We Daughters of St. Paul look to the future with confidence and courage. Thanks to the generous and intelligent faith of Mother Thecla, ours is a life of prayer and apostolate which is ever young and vital in the life of the

Church. And she has not left us alone; we share with her a deep reverence for the eternal Word of God and we feel her presence with us during our daily hour of Eucharistic Adoration. From heaven she reminds us: &quot;Where there is the tabernacle we are never alone. Make beautiful hours of adoration... We lack nothing when we have Jesuswith us.&quot; Many of us are generousâ&amp;#x20AC;&amp;#x201D;in differing degreesâ&amp;#x20AC;&amp;#x201D;but to find a person who has set out to give EVERYTHING,and has kept on giving until death, isn&#39;t easy. We celebrate the total gift Mother Thecla made of her life to the Lord and his people. She was &quot;one in a million.&quot; The Church officially recognized this when, on January 22, 1992, Pope John Paul II declared her Venerable.

Co-Foundress of the Daughters of St. Paul. 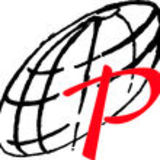