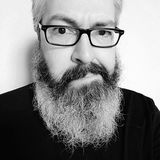 Paulo Alegria (Paulgi), published his first book, "Romeiros~Pilgrims" in 2010, which is a contemporary portrait of the people who go on pilgrimage to the religious events in Alto Minho (north of Portugal). The following year, he was in charge of the cinematography for "Alto do Minho", a documentary work on the identity of people from Alto Minho, and he was awarded with the Estação Imagem grant from Mora (south of Portugal), where he developed a photographic work close to the population of Alentejo, documenting their cultural, sporting, recreational and humanitarian associations, which resulted in his second book "Lean Culture" published in 2012. He graduated in Graphic Design and developed his knowledge in other areas such as Architecture, Visual Arts, Engraving, Screen printing and Photography. He is a member of ALT (a Portuguese association of independent photographers) and he was in the elite team of the former cooperative Young Photographers United, in the early years of activity.