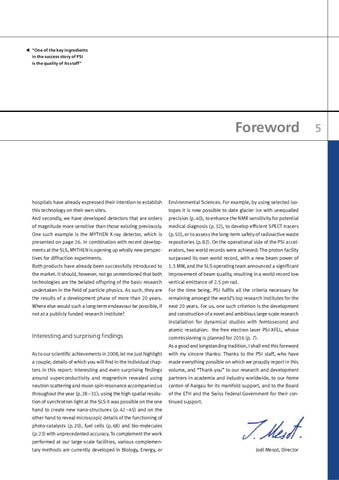 hospitals have already expressed their intention to establish

this technology on their own sites.

topes it is now possible to date glacier ice with unequalled

And secondly, we have developed detectors that are orders

precision (p. 40), to enhance the NMR sensitivity for potential

of magnitude more sensitive than those existing previously.

One such example is the MYTHEN X-ray detector, which is

(p. 50), or to assess the long-term safety of radioactive waste

presented on page 26. In combination with recent develop-

repositories (p. 82). On the operational side of the PSI accel-

ments at the SLS, MYTHEN is opening up wholly new perspec-

surpassed its own world record, with a new beam power of

Both products have already been successfully introduced to

1.3 MW, and the SLS operating team announced a significant

the market. It should, however, not go unmentioned that both

improvement of beam quality, resulting in a world-record low

technologies are the belated offspring of the basic research

undertaken in the field of particle physics. As such, they are

For the time being, PSI fulfils all the criteria necessary for

the results of a development phase of more than 20 years.

remaining amongst the world’s top research institutes for the

Where else would such a long-term endeavour be possible, if

next 20 years. For us, one such criterion is the development

not at a publicly funded research institute?

atomic resolution: the free electron laser PSI-XFEL, whose commissioning is planned for 2016 (p. 7). As a good and longstanding tradition, I shall end this foreword

As to our scientific achievements in 2008, let me just highlight

with my sincere thanks: Thanks to the PSI staff, who have

a couple, details of which you will find in the individual chap-

made everything possible on which we proudly report in this

ters in this report: Interesting and even surprising findings

volume, and “Thank you” to our research and development

around superconductivity and magnetism revealed using

partners in academia and industry worldwide, to our home

canton of Aargau for its manifold support, and to the Board

of the ETH and the Swiss Federal Government for their con-

hand to create new nano-structures (p. 42 – 45) and on the other hand to reveal microscopic details of the functioning of photo-catalysts (p. 20), fuel cells (p. 68) and bio-molecules (p. 23) with unprecedented accuracy. To complement the work performed at our large-scale facilities, various complementary methods are currently developed in Biology, Energy, or