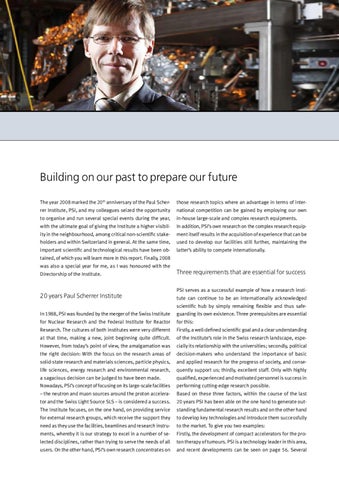 those research topics where an advantage in terms of inter-

rer Institute, PSI, and my colleagues seized the opportunity

national competition can be gained by employing our own

to organise and run several special events during the year,

with the ultimate goal of giving the Institute a higher visibil-

In addition, PSI’s own research on the complex research equip-

ity in the neighbourhood, among critical non-scientific stake-

ment itself results in the acquisition of experience that can be

holders and within Switzerland in general. At the same time,

used to develop our facilities still further, maintaining the

important scientific and technological results have been ob-

tained, of which you will learn more in this report. Finally, 2008 was also a special year for me, as I was honoured with the Directorship of the Institute.

In 1988, PSI was founded by the merger of the Swiss Institute

guarding its own existence. Three prerequisites are essential

for Nuclear Research and the Federal Institute for Reactor

Research. The cultures of both institutes were very different

Firstly, a well-defined scientific goal and a clear understanding

at that time, making a new, joint beginning quite difficult.

of the Institute’s role in the Swiss research landscape, espe-

However, from today’s point of view, the amalgamation was

cially its relationship with the universities; secondly, political

the right decision: With the focus on the research areas of

decision-makers who understand the importance of basic

and applied research for the progress of society, and conse-

quently support us; thirdly, excellent staff. Only with highly

a sagacious decision can be judged to have been made.

qualified, experienced and motivated personnel is success in

Nowadays, PSI’s concept of focusing on its large-scale facilities

– the neutron and muon sources around the proton accelera-

Based on these three factors, within the course of the last

tor and the Swiss Light Source SLS – is considered a success.

The Institute focuses, on the one hand, on providing service

standing fundamental research results and on the other hand

for external research groups, which receive the support they

to develop key technologies and introduce them successfully

need as they use the facilities, beamlines and research instru-

to the market. To give you two examples:

ments, whereby it is our strategy to excel in a number of se-

Firstly, the development of compact accelerators for the pro-

lected disciplines, rather than trying to serve the needs of all

ton therapy of tumours. PSI is a technology leader in this area,

users. On the other hand, PSI’s own research concentrates on

and recent developments can be seen on page 56. Several