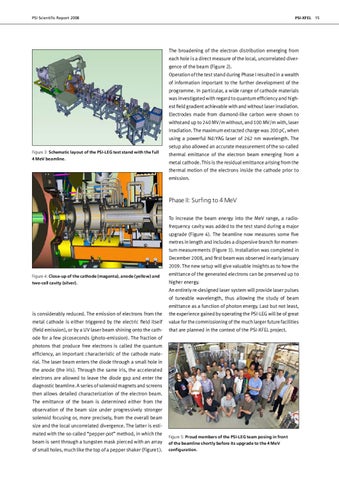 The broadening of the electron distribution emerging from each hole is a direct measure of the local, uncorrelated divergence of the beam (Figure 2). Operation of the test stand during Phase I resulted in a wealth of information important to the further development of the programme. In particular, a wide range of cathode materials was investigated with regard to quantum efficiency and highest field gradient achievable with and without laser irradiation. Electrodes made from diamond-like carbon were shown to withstand up to 240 MV/m without, and 100 MV/m with, laser irradiation. The maximum extracted charge was 200 pC, when using a powerful Nd:YAG laser of 262 nm wavelength. The setup also allowed an accurate measurement of the so-called Figure 3: Schematic layout of the PSI-LEG test stand with the full 4 MeV beamline.

Phase II: Surfing to 4 MeV To increase the beam energy into the MeV range, a radiofrequency cavity was added to the test stand during a major upgrade (Figure 4). The beamline now measures some five metres in length and includes a dispersive branch for momentum measurements (Figure 3). Installation was completed in December 2008, and first beam was observed in early January 2009. The new setup will give valuable insights as to how the Figure 4: Close-up of the cathode (magenta), anode (yellow) and

emittance of the generated electrons can be preserved up to

higher energy. An entirely re-designed laser system will provide laser pulses of tuneable wavelength, thus allowing the study of beam emittance as a function of photon energy. Last but not least,

is considerably reduced. The emission of electrons from the

metal cathode is either triggered by the electric field itself

value for the commissioning of the much larger future facilities

(field emission), or by a UV laser beam shining onto the cath-

that are planned in the context of the PSI-XFEL project.

ode for a few picoseconds (photo-emission). The fraction of photons that produce free electrons is called the quantum efficiency, an important characteristic of the cathode material. The laser beam enters the diode through a small hole in the anode (the iris). Through the same iris, the accelerated electrons are allowed to leave the diode gap and enter the diagnostic beamline. A series of solenoid magnets and screens then allows detailed characterization of the electron beam. The emittance of the beam is determined either from the observation of the beam size under progressively stronger solenoid focusing or, more precisely, from the overall beam size and the local uncorrelated divergence. The latter is estimated with the so-called â&#x20AC;&#x153;pepper-potâ&#x20AC;? method, in which the beam is sent through a tungsten mask pierced with an array of small holes, much like the top of a pepper shaker (Figure1).

Figure 5: Proud members of the PSI-LEG team posing in front of the beamline shortly before its upgrade to the 4 MeV configuration.