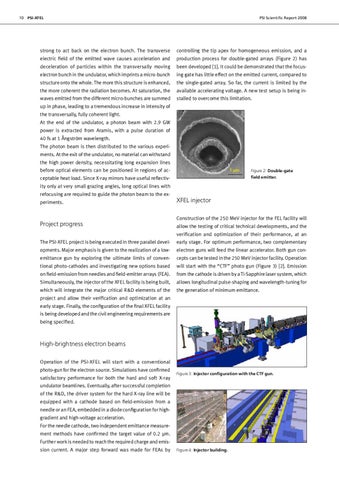 strong to act back on the electron bunch. The transverse

controlling the tip apex for homogeneous emission, and a

electric field of the emitted wave causes acceleration and

deceleration of particles within the transversally moving

been developed [1]. It could be demonstrated that the focus-

electron bunch in the undulator, which imprints a micro-bunch

ing gate has little effect on the emitted current, compared to

structure onto the whole. The more this structure is enhanced,

the single-gated array. So far, the current is limited by the

the more coherent the radiation becomes. At saturation, the

available accelerating voltage. A new test setup is being in-

waves emitted from the different micro-bunches are summed

stalled to overcome this limitation.

up in phase, leading to a tremendous increase in intensity of the transversally, fully coherent light. At the end of the undulator, a photon beam with 2.9 GW power is extracted from Aramis, with a pulse duration of 40 fs at 1 Ångström wavelength. The photon beam is then distributed to the various experiments. At the exit of the undulator, no material can withstand the high power density, necessitating long expansion lines before optical elements can be positioned in regions of ac-

ceptable heat load. Since X-ray mirrors have useful reflectivity only at very small grazing angles, long optical lines with refocusing are required to guide the photon beam to the experiments.

XFEL injector Construction of the 250 MeV injector for the FEL facility will allow the testing of critical technical developments, and the verification and optimization of their performance, at an

The PSI-XFEL project is being executed in three parallel devel-

opments. Major emphasis is given to the realization of a low-

electron guns will feed the linear accelerator. Both gun con-

emittance gun by exploring the ultimate limits of conven-

cepts can be tested in the 250 MeV injector facility. Operation

on field-emission from needles and field-emitter arrays (FEA).

from the cathode is driven by a Ti-Sapphire laser system, which

Simultaneously, the injector of the XFEL facility is being built,

which will integrate the major critical R&D elements of the

the generation of minimum emittance.

project and allow their verification and optimization at an early stage. Finally, the configuration of the final XFEL facility is being developed and the civil engineering requirements are being specified.

High-brightness electron beams Operation of the PSI-XFEL will start with a conventional photo-gun for the electron source. Simulations have confirmed satisfactory performance for both the hard and soft X-ray

undulator beamlines. Eventually, after successful completion of the R&D, the driver system for the hard X-ray line will be equipped with a cathode based on field-emission from a needle or an FEA, embedded in a diode configuration for highgradient and high-voltage acceleration. For the needle cathode, two independent emittance measurement methods have confirmed the target value of 0.2 μm. Further work is needed to reach the required charge and emission current. A major step forward was made for FEAs by