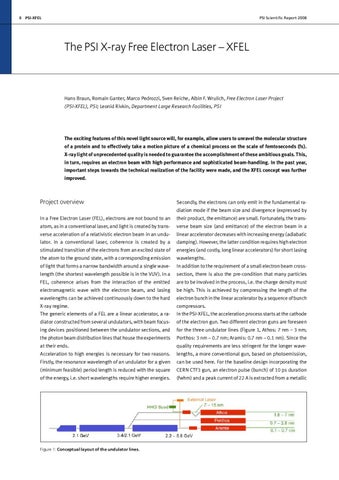 The exciting features of this novel light source will, for example, allow users to unravel the molecular structure of a protein and to effectively take a motion picture of a chemical process on the scale of femtoseconds (fs). X-ray light of unprecedented quality is needed to guarantee the accomplishment of these ambitious goals. This, in turn, requires an electron beam with high performance and sophisticated beam-handling. In the past year, important steps towards the technical realization of the facility were made, and the XFEL concept was further improved.

Secondly, the electrons can only emit in the fundamental radiation mode if the beam size and divergence (expressed by

In a Free Electron Laser (FEL), electrons are not bound to an

their product, the emittance) are small. Fortunately, the trans-

atom, as in a conventional laser, and light is created by trans-

verse beam size (and emittance) of the electron beam in a

verse acceleration of a relativistic electron beam in an undu-

lator. In a conventional laser, coherence is created by a

stimulated transition of the electrons from an excited state of

the atom to the ground state, with a corresponding emission

of light that forms a narrow bandwidth around a single wave-

In addition to the requirement of a small electron beam cross-

length (the shortest wavelength possible is in the VUV). In a

section, there is also the pre-condition that many particles

FEL, coherence arises from the interaction of the emitted

are to be involved in the process, i.e. the charge density must

electromagnetic wave with the electron beam, and lasing

be high. This is achieved by compressing the length of the

wavelengths can be achieved continuously down to the hard

electron bunch in the linear accelerator by a sequence of bunch

The generic elements of a FEL are a linear accelerator, a ra-

In the PSI-XFEL, the acceleration process starts at the cathode

ing devices positioned between the undulator sections, and

the photon beam distribution lines that house the experiments

quality requirements are less stringent for the longer wave-

Acceleration to high energies is necessary for two reasons.

lengths, a more conventional gun, based on photoemission,

Firstly, the resonance wavelength of an undulator for a given

can be used here. For the baseline design incorporating the

(minimum feasible) period length is reduced with the square