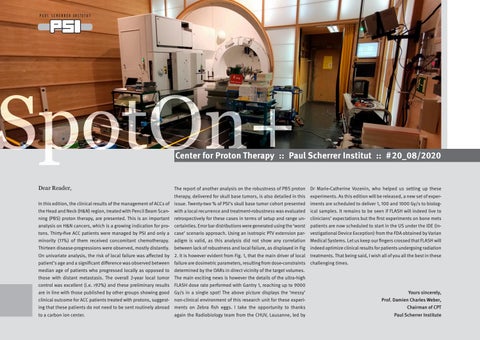 The report of another analysis on the robustness of PBS proton Dr Marie-Catherine Vozenin, who helped us setting up these therapy, delivered for skull base tumors, is also detailed in this experiments. As this edition will be released, a new set of exper-

In this edition, the clinical results of the management of ACCs of issue. Twenty-two % of PSI’s skull base tumor cohort presented iments are scheduled to deliver 1, 100 and 1000 Gy/s to biologthe Head and Neck (H&N) region, treated with Pencil Beam Scan-

with a local recurrence and treatment-robustness was evaluated ical samples. It remains to be seen if FLASH will indeed live to

ning (PBS) proton therapy, are presented. This is an important retrospectively for these cases in terms of setup and range un- clinicians’ expectations but the first experiments on bone mets analysis on H&N cancers, which is a growing indication for pro- certainties. Error bar distributions were generated using the ‘worst

tons. Thirty-five ACC patients were managed by PSI and only a

vestigational Device Exception) from the FDA obtained by Varian

minority (11%) of them received concomitant chemotherapy.

adigm is valid, as this analysis did not show any correlation Medical Systems. Let us keep our fingers crossed that FLASH will

between lack of robustness and local failure, as displayed in Fig

On univariate analysis, the risk of local failure was affected by 2. It is however evident from Fig. 1, that the main driver of local treatments. That being said, I wish all of you all the best in these patient’s age and a significant difference was observed between

median age of patients who progressed locally as opposed to

determined by the OARs in direct vicinity of the target volumes.

those with distant metastasis. The overall 2-year local tumor The main exciting news is however the details of the ultra-high control was excellent (i.e. >92%) and these preliminary results FLASH dose rate performed with Gantry 1, reaching up to 9000 are in line with those published by other groups showing good Gy/s in a single spot! The above picture displays the ‘messy’ clinical outcome for ACC patients treated with protons, suggest-

non-clinical environment of this research unit for these experi-

ing that these patients do not need to be sent routinely abroad ments on Zebra fish eggs. I take the opportunity to thanks to a carbon ion center.

again the Radiobiology team from the CHUV, Lausanne, led by

sented with inoperable disease and underwent

of the minor and major salivary glands. It typi- maintaining an acceptable toxicity profile can

cally features extensive local infiltration into the be therefore expected clinically. In the present comitant chemotherapy. 19 male and 16 female adjacent tissues and, regionally, along the neu-

study we report the outcome of patients treated patients received median doses of 70 and 75.6

ral fibers rather than into the local lymph nodes.

with PBS PT for ACCs.

Figure 2: Dose distribution of a simultaneous integrated boost (SIB) plan for a 37-year old male patient with ACC of the left hard palate with perineural infiltration (coronal view). Two dose levels were applied: 70.8 GyRBE to the high risk region (red color ~ 130% dose) and 54 GyRBE to the intermediate risk region (blue color ~ 100% dose). The contralateral side could be completely spared.

Its treatment requires – if possible – a complete

tolerated by the patients. Five patients (14.2%)

of death were the tumor prognostic group (IVB-

The median follow-up was 30 months (range:

sands of millimeter-thin single beams which

tion with PBS PT were included in this analysis,

deposit their peak energy at a precisely set depth

except if they had metastatic disease, Karnofsky sion, which included 4 patients with local fail-

in tissue. Dosimetrically, this results in signifi- Performance status < 80% and if they underwent ures, 6 with distant metastasis as well as both

or 5 toxicities were observed.

cantly reduced relative entry dose and no exit prior irradiation. All 35 patients, treated between distant and local progression in 3 cases (in all 2001 and 2017, were immobilized in supine of these the distant metastases occurred first). treatment position. Delineation of target vol-

umes and organs at risk (OAR) were done on a

Conclusions PBS PT is a safe and effective way of delivering

risk of local failure was affected by patient age pattern of failure. Our data suggests that age,

ning software according to the ICRU 62 and 83

guidelines and also approved on an internal 7.7%; p= 0.002). A significant difference was negative impact on LC, OS and PFS. review board.

The results of this study were published recently

Gantry 1 at PSI – a perfect tool for FLASH research

Gantry 1 at PSI commissioned for FLASH research with protons

Gantry 1 treated patients from 1996 until the end

of 2018. It was the first facility worldwide that used the spot-scanning technique. It is also

FLASH radiotherapy with electrons, which has equipped with a fully automated, discretized already been used to perform the first ever FLASH

In recent years, several studies have indicated treatment of a human patient in 2018.

range shifter mounted on the gantry nozzle. This feature gives a unique opportunity to transport

that ultra-high dose rates might result in reduced The FLASH effect has become interesting also for an un-degraded proton beam to the isocenter in toxicities to healthy tissues while keeping at least the proton therapy community. Several centers order to maximize the beam intensity, hence the the same tumor control as in the case of treat-

in the world, as well as main vendors in the field,

dose rate, while keeping the possibility of con-

Figur 2: Team of researchers from PSI and CHUV at Gantry 1 during the first biological FLASH experiment

ments with standard dose rate levels (so-called started to investigate the possibility of reaching formal (Bragg peak) irradiations. As such, this FLASH effect). The topic has gained international FLASH dose rates with existing machines. Based gantry is an ideal FLASH test bench for protons. attention and many leading centers for radiation

up to 9000Gy/s along the central axis have been

on the studies with photons and electrons, it has In the past few months, we have implemented all achieved for a spot of 2 mm (1 sigma).

oncology have launched their research programs been concluded that the threshold for the FLASH the necessary modifications to enable FLASH iron the FLASH effect. In Switzerland, a leading role

radiations at Gantry 1. Safety requirements were

in the international research of FLASH has been

than conventional dose rates. However, the defi-

first defined and the existing safety systems of

played by the Lausanne University Hospital nition of the dose rate is prone to ambiguities, as the gantry have been adapted accordingly. We (CHUV). They commissioned a prototype linac for the beam has its microstructure and the average dose rate may be substantially dif-

Biological experiments After the successful commissioning of the gantry

optimized the beamline parameters to transport for FLASH irradiations, we have launched an exa 250 MeV produced by the PSI COMET cyclotron

perimental program together with our partners

ferent from the maximum dose rate to the treatment room with minimum loses, from the Lausanne University Hospital (CHUV) in a short pulse. The definition of achieving a transmission of up to 85% and a beam

and Varian. As such, we are currently conducting

the dose rate is also difficult for current of 680 nA at the isocenter. One of the first experiments with zebrafish embryos together with pencil beam scanning, as it has a irradiations in the FLASH mode is visualized in

the team of Marie-Catherine Vozenin from CHUV

sequential character. Since the Fig. 1. To control the dose in the FLASH regime,

(Fig. 2) in order to quantify any FLASH effects in

mechanism of FLASH has not been

we characterized and calibrated a dose monitor biological samples.

on the gantry against a dose-rate independent

ence of pauses in dose delivery and measurement (Faraday cup) together with a refractionation is not understood yet.

Therefore, exact conditions for the

zation chamber. With these solutions, we reached meeting of the American Association of Physics

an absolute dose accuracy of 2-3% for a wide

This work has been presented at the virtual annual in Medicine (AAPM) mid July 2020.

known and represent a topic of dose rate spectrum from 1 to 9000 Gy/s in a numerous studies. Thus, flexible

single spot in water. For single pencil beams, For any further information please refer to CPT

FLASH test benches, able to provide different dose rates can also be achieved by Dr. Konrad P. Nesteruk Figur 1: Live image from a video camera of a 525 nA proton beam traversing a scintillating block. The length of the pulse was 10 ms.

thus the spot size. With our set-up, dose rates of konrad.nesteruk@psi.ch

for bite-block and ±2.25 mm for mask considering

Medical-Physics News Is there a correlation between robustness and tumor control for skull base proton PBS treatments?

confidence interval of 85%) and range (±3%) were retrospectively computed, and error bar distributions generated using the ‘worst case scenario’ approach. Finally, dosimetric and robustness parameters in the form of Dose Volume Histograms (DVH) and Error Volume Histograms (EVH) were computed for both the full CTV, as well as the union of the recurrence volume and CTV, for

The most modern technique for delivering protons the plan can be considered “robust”. is pencil beam scanning (PBS). With proton ther-

Skull base Chordomas (Ch) and Chondrosarcomas

Figure 2: The plots represent the mean and standard deviation of all EVHs for the targets and the onset of recurrences.

apy, highly conformal dose distributions can be (ChSa) are major indications of proton therapy at The spread of DVHs and EVHs for all cases for the delivered to the target volume, while OARs situ-

our institute. These are tumors whose manage- entire CTV (red) and just the regions of recurrence

ated in the proximity can be spared. However,

ment is challenging because they are situated in overlapping with the CTV (green) are shown in fig. conference in late fall in Vienna, Austria.

This work will be presented at this year’s ESTRO

due to the physical characteristics of PT, there is close vicinity to a number of critical structures, 1 and fig 2, respectively. No correlation was found a general worry in the radiotherapy community like the brainstem and the anterior optic path- between LF and robustness either for the whole

For any further information, please refer to CPT

ways. Due to the well-defined range of protons,

substantially affected by both range and set-up highly conformal dose distribution to such tuuncertainties.

CTV or for the overlapping regions of recurrence

Range uncertainties are generally systematic and critical structures. However, how robust are these left) in the recurrence region compared to the propagate through the course of the therapy, plans to delivery uncertainties, and could prob- whole CTV (fig. 2). A minor, but statistically insigwhereas setup uncertainties tend to be randomly lems with robustness affect treatment outcomes?

nificant correlation was however found as a func-

distributed through the therapy, and therefore

tion of nominal dose, with the mean dose to the

their importance is reduced. The “robustness” of Methods and Materials

Between 2003 and 2017, 222 patients with skullbase chondrosarcomas and Chordomas were treated with PBS PT at PSI, to a median total dose

of 70 GyRBE and 74 GyRBE respectively. All plans Our results for skull base tumors show that there were optimized on a 5mm isotropical expansion

is no correlation of LF to lack of robustness, indi-

of the CTV using our in-house developed treat-

cating that the use of a simple, isotropic PTV is

the nominal plan is most important for obtaining

treatment robustness to both set-up (±1.76 mm

ment planning system. No additional range an effective approach for dealing with treatment adapted PTV’s or robust optimisation were used.

uncertainties for these patients. On the other

Follow-up MRIs were systematically acquired on hand, the analysis of dosimetric parameters all patients, and local failures (LFs) identified and seems to indicate that the dosimetric quality of Figure 1: The plots represent the mean and standard deviation of all DVHs for the targets and the onset of recurrences.