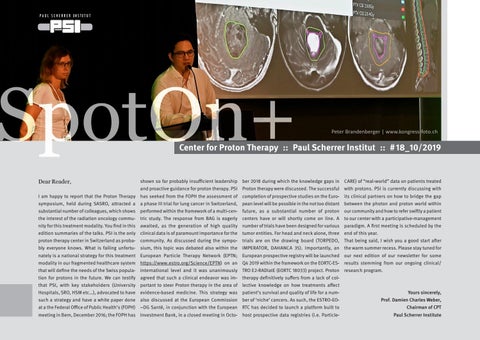 shown so far probably insufficient leadership ber 2018 during which the knowledge gaps in CARE) of “real-world” data on patients treated and proactive guidance for proton therapy. PSI Proton therapy were discussed. The successful with protons. PSI is currently discussing with

I am happy to report that the Proton Therapy has seeked from the FOPH the assessment of completion of prospective studies on the Eurosymposium, held during SASRO, attracted a

a phase III trial for lung cancer in Switzerland,

substantial number of colleagues, which shows performed within the framework of a multi-cen-

its clinical partners on how to bridge the gap

pean level will be possible in the not too distant between the photon and proton world within future, as a substantial number of proton

our community and how to refer swiftly a patient

the interest of the radiation oncology commu- tric study. The response from BAG is eagerly centers have or will shortly come on line. A

to our center with a participative-management

nity for this treatment modality. You find in this awaited, as the generation of high quality number of trials have been designed for various paradigm. A first meeting is scheduled by the edition summaries of the talks. PSI is the only clinical data is of paramount importance for the

proton therapy center in Switzerland as proba- community. As discussed during the sympo- trials are on the drawing board (TORPEDO, bly everyone knows. What is failing unfortu-

sium, this topic was debated also within the

end of this year. That being said, I wish you a good start after

nately is a national strategy for this treatment European Particle Therapy Network (EPTN; European prospective registry will be launched our next edition of our newsletter for some modality in our fragmented healthcare system https://www.estro.org/Science/EPTN) on an that will define the needs of the Swiss popula-

tion for protons in the future. We can testify agreed that such a clinical endeavor was im- therapy definitively suffers from a lack of colthat PSI, with key stakeholders (University portant to steer Proton therapy in the area of lective knowledge on how treatments affect Hospitals, SRO, HSM etc…), advocated to have evidence-based medicine. This strategy was patient’s survival and quality of life for a num-

such a strategy and have a white paper done also discussed at the European Commission ber of ‘niche’ cancers. As such, the ESTRO-EO-

RTC has decided to launch a platform built to

at a the Federal Office of Public Health’s (FOPH)

–DG Santé, in conjunction with the European

can be minimized which reduces toxicity. In close collaboration with the Kantonsspital Aarau, a clinical study of concurrent hyperthermia and proton beam radiotherapy in primary and recurrent unresectable soft tissue sarcoma is run-

Indications for proton therapy in Switzerland are

entity based. The Federal Office of Public Health publications [Weber 2018; Weber 2016; Weber FOPH has accepted the application by PSI on

certain indications in 2009. For the following Meningiomas usually grow slowly and do not children. Based on multi-disciplinary diagnoses proton therapy is reimbursed by the metastasize, but can cause severe local probcompulsory health insurance:

lems. Over 160 meningioma patients have been of pediatric oncological patients have treated with protons at PSI, the majority of them considerably improved. However, the

belong to the benign, grade I category. A recent therapy induced side effects can be sub-

• Tumors of the skull/skull base:

86% and a 5-year high grade toxicity free survival on the quality of life. Proton therapy is

reimbursed by the health insurance for

Sarcomas are malignant cancers of the connec-

all types of pediatric tumors. Over 550

tive and supportive tissues. They can develop children have been treated with protons

in all regions of the body and require a high ir-

at PSI with the aim of reducing long-term

• Tumors of brain and meninges

toxicity and minimizing the low dose bath to on a clear dosimetric advantage of protons. Ap-

plications for new indications to the FOPH in order

• Tumors outside skull along the vertebral

tified based on randomized trial data. As the

[Weber 2017]. Due to the close cessfully joined the American NRG oncology netcollaboration with the chil-

in Switzerland only, we are happy to have sucwork as an associate member. This gives us the

have been successfully treated at PSI since 1984

evidence for proton therapy. Our aim is to join the

which represents 20% of all patients with ocular

In very exceptional cases the

trial (photons vs. protons) next year.

Chordomas and Chondrosarcomas are very rare tumors, but one of the standard diagnoses treated with protons at PSI. Our long-standing

Figure 2: dosimetry of a pediatric patient with medulloblastoma, treated with cranio-spinal axis irradiation and a boost to the brain.

Research and Development has always been at the core of the Center for Proton Therapy at PSI. As such, our current medical physic research covers the topics as shown below:

– workflow development to support a fully automatized, non-invasive MRI-based only approach and its clinical implementation

As well as being pursued by PSI staff, our research program is strongly supported by post-doctoral, PhD, master and bachelor students from Switzerland and all over the world, as well as being supported by a number of grants and industrial collaborations.

Figure 2: (a) Very conformal dose distribution obtained for this complex lymphoma case. (b) Representation of the 4 fields directions used and of the partial PTVs (PTV1 to PTV4) used in the optimization process. In red the PTV to be treated with 30GyRBE.

Considering the complexity of the tar-

patient consulted due to enlarged right metabolic response. Involved-field get shape, the many OARs, the pres-

cervical lymph nodes. A PET-CT showed consolidation irradiation was recom- ence of a metallic port and the potential Left:0.7]. Mean dose to heart was be- Proton therapy should therefore be hypermetabolic adenopathies in the

mended and the patient was referred residual breathing motion, the proton

low 6 GyRBE whilst for both lungs the

rections, each targeting a different PTV

sub-portion. Each area of the PTV was Proton therapy delivery covered by at least 2 fields. The result-

The patient was scanned in a supine

position, arms down. The planning-CT

was fused with the initial PET-CT. The

target volumes delineation concept is ro-anterior and one slightly oblique).

ing was ensured by sets of kV imaging

before each field and no set up issue

The anterior approach was used for the

was assessed with a slow-CT, which did most cranial part of the PTV down to arose during treatment. Proton therthe level of the breast, whilst posterior apy was completed without interrup-

target region. Planning was therefore approach was privileged for the most tion or unexpected events. A grade 2 done with a 3D approach. Dose pre-

caudal portion of the PTV to avoid the

not show any significant motion in the

considered in young patients with

technique that was selected included D10 was below 25.5 Gy RBE for both of Lymphoma, especially women, with

cancer irradiation dose constraints ing the dose to OARs: average dose to this 29yo patient with a complex treat-

fined organs at risks (OAR) included directions are displayed in Figure 2. The the breast, heart and coronary arteries,

which were to be spared as much as coverage above 99% for GTV, CTV and reasonably achievable (ALARA). Breast PTV. This was obtained whilst minimiz-

We successfully planned and treated