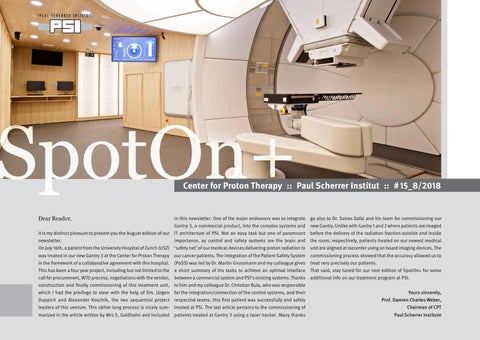 in this newsletter. One of the major endeavors was to integrate

go also to Dr. Sairos Safai and his team for commissioning our

Gantry 3, a commercial product, into the complex systems and new Gantry. Unlike with Gantry 1 and 2 where patients are imaged it is my distinct pleasure to present you the August edition of our

IT architecture of PSI. Not an easy task but one of paramount before the delivery of the radiation fraction outside and inside

importance, as control and safety systems are the brain and the room, respectively, patients treated on our newest medical

On July 16th, a patient from the University Hospital of Zurich (USZ) ‘safety net’ of our medical devices delivering proton radiation to

unit are aligned at isocenter using on board imaging devices. The

was treated in our new Gantry 3 at the Center for Proton Therapy our cancer patients. The integration of the Patient Safety System commissioning process showed that the accuracy allowed us to in the framework of a collaborative agreement with this hospital. (PaSS) was led by Dr. Martin Grossmann and my colleague gives treat very precisely our patients. This has been a four year project, including but not limited to the a short summary of his tasks to achieve an optimal interface call for procurement, WTO process, negotiations with the vendor,

That said, stay tuned for our next edition of SpotOn+ for some

between a commercial system and PSI’s existing systems. Thanks additional info on our treatment program at PSI.

construction and finally commissioning of this treatment unit, to him and my colleague Dr. Christian Bula, who was responsible for the integration/connection of the control systems, and their

which I had the privilege to steer with the help of Drs. Jürgen

treated at PSI. The last article pertains to the commissioning of

marized in the article written by Mrs S. Goldhahn and included patients treated at Gantry 3 using a laser tracker. Many thanks

leaders of this venture. This rather long process is nicely sum-

With millimetre precision, certain tu- a conventional cancer irradiation mours can be irradiated at the Paul would be too risky. With the proton Scherrer Institute PSI using protons. therapy, we irradiate the tumour more Now PSI, where more than 8,000 pa- accurately and better protect the tients have already been irradiated healthy tissue around it.” successfully, has expanded its capacity through a joint project with the

The good cooperation and the tight

University Hospital Zurich and the Uni-

exchange between PSI and the Univer-

versity of Zurich, with a state-of-the-art sity Hospital Zurich, as well as all other treatment facility: the new Gantry 3.

are treated with conventional radiation

ised clinics in Aarau, Lucerne, and St. therapy, a much too large area has to Gallen, have contributed decisively to

be irradiated in order to really hit the

struction as well as a one-year test this success, according to Weber. Each

whole tumour”, Weber explains. It is

phase, the time has come: The most cancer patient receives an individual,

precisely with these complicated tu-

After four years of planning and con-

modern irradiation facility at the Centre personally tailored treatment plan. This mours that the special advantage of for Proton Therapy CPT of the Paul can also include other forms of treat-

proton therapy comes into play: Only also installed in the shortest time to

Scherrer Institute PSI has been put into ment, such as operations or chemo-

with a proton beam can the doctors date. “To build an irradiation facility took part.

operation. With a total weight of 270

from science, politics and industry

control how deep in the body the par-

ticles should exert their maximum ef-

says Damien Weber. “It was only pos-

The first patient treated at Gantry 3 is

Gantry 3 is the largest machine in-

Proton therapy with the spot scanning fect. Up to that point they do in fact sible thanks to the outstanding collab-

penetrate other tissues, yet they do

presenting with a benigne brain tumor.

therapy, in addition to proton therapy.

stalled to date at CPT. The main bene- technique means that a beam of pos-

oration with our Swiss industry part-

fit the collaborators cite with the arrival itively charged atomic particles is fired very limited damage there. The tissues ners as well as the support of various She was operated at University Hospiof Gantry 3 is shorter waiting times for

at a tumour, and that the beam scans behind the tumour remain unscathed.

departments of PSI. Through joint ef-

tal Zurich and was recommended pro-

this tumour from back to front, layer by Consequently, there are fewer side-ef-

forts, we have installed cutting-edge

ton therapy due to her young age and

head and chairman of CPT, empha-

layer and row by row – until the proton

fects from proton irradiation than with

localization of the tumor. Her irradia-

sises: “With Gantry 3, we can offer

beam has hit every spot on the tumour.

Gantry 3 was financed with money from

Some types of cancer grow around

the lottery of the canton of Zurich as and safely.

patients than ever before, because we sensitive structures in the body, such The new machine immediately breaks well as PSI’s own funds. The new treathave more capacity. That will be espe-

as the optic nerve for example, or have several records at CPT. Not only is it the ment facility was opened in May with Excerpt from a press release written by

cially beneficial for children, for whom a very irregular form. “If these tumours largest of the three gantries, but it was a ceremony in which representatives Sabine Goldhahn

Gantry 3 is based on Varian’s commer-

The approach to solve this problem

The implementation is based on the the conversion of the

cial ProBeam® product. As such it was to leave the existing systems platform for PSI’s Therapy Control Sys-

comes fully equipped with its own

tems which allowed the reuse of large (different electrical and

systems to apply the proton beam in

faces by newly developed interfaces parts of the software. Most of the optical connections):

a precise and safe way. The situation called “adapters”. Two kinds of con- hardware is the same as used else-

of Gantry 3 is however different to nections can be distinguished:

where at PSI which allows the pooling Boxes (SCB) accept dif-

ProBeam®: in the standard system

the whole facility is provided by Var-

and the beamline, along with their lines (e.g. setting of beam energy and fast control commands (normal beam respective control and safety systems,

on/off ) and signals concerning the via fibre optical cables.

have been developed by PSI or third ers etc.) are handled through a net-

parties. The challenge was to connect work interface. The PSI Control System

these worlds and the different tech- Adapter relays these commands to the various types. While reusing much of sponsible for passing on interlock nologies involved.

the technology from PSI’s existing

signals to the central safety systems.

then configures cyclotron and beam-

Therefore it has been designed failsafe

line accordingly. A supervision of the to allow the detection of broken lines,

in the sense that a broken connection

or a power failure will always put the

system is also implemented in the PSI

a state-of-the-art platform. The choice system in the safe state (no beam). In

Principle for the Varian/PSI Control and Safety System Integration. Varian’s and PSI’s control system are left untouched. Dedicated adapters serve as interface between the two worlds. Control signals are passed over the network whereas safety critical signals are connected by hardware lines.

addition it has been implemented tem testing. They have been installed

oped jointly by company IOXOS and redundantly i.e. the adapter physically in 2015 and have been successfully The hardware of the PSI Safety System Adapter installed in the Gantry 3 electronics room. The upper crate holds the two redundant IFC1210® controllers. In the central part of the rack are two Signal Converter Boxes (SCB) that provide connections to external signals from Varian and from PSI. Communication between the IFC210 and the SCBs is handled over fibre optical links (orange cables). The lower part of the rack holds the patch panel with connections to PSI’s central safety systems.

PSI) which features a user program-

exists in two instances which are con-

running through the commissioning phase of Gantry 3.

the safety logic which after system Again, in case of inconsistency, the startup is totally autonomous.

system will go to the safe state. For any further information,

system of the ProBeam Gantry 3 using a laser tracker P5

Introduction: For accurate radiotherapy, a relia-

(LT), which guarantees an accuracy of measure- be challenging. Overall, the accuracy of the table ment up to 30µm.

is satisfactory, as image guidance would not be able to detect deviations in patient position

isocentric rotations). A reliable system with these

to the mechanical components of the system, images to be taken during patient alignment and ually aligned at isocenter using the laser tracker

also referred to as “table”, and not P5 to the softP5

P1 verification, which in turn reduces the treatment

at the reference imaging position (at table rota- marta.peroni@psi.ch

ware for patient P1 alignment. For such a system, P4

also rotations around the isocenter need to be

accurate and reproducible. This should be the

not and satisfies the ALARA principle. P4 only translational point-to-point moves, but

case regardless of treatment localisation and patient treatments in the 90’s, first with Gantry tracker. 3D distances from nominal isocentre for

Fig. 1: Weight distribution on the couch top. The center-of-mass for an adult was positioned patient weight. Ideally, after patient alignment 1 and then with Gantry 2. The patient is imaged 80-85 cm from the top of the couch, while the center-of-mass for a child was positioned 40a reference imaging position, the table should only once at the beginning of each fraction: in 45 cm from at the top. The red arrow shows the target point P4 with the reflector. For each reaching the actual treatment position for Gantry 1 with a CT positioned outside the treatweight classallow the top and bottom images are complementary, showing the most cranial and the first, and all subsequent fields, without the ment room, and in Gantry 2 with a CT-on-rails most caudal section of the couch, respectively, with some overlapping areas (around P1). located in the actual room.

with the on-board X-ray im-

sitioning system consists of (e.g. Fig. 1), even with pitch and roll. Repeatabil-

a 6 degree of freedom KUKA

isocentric rotations (every 30°) with and without

each weight and target in the presence of (i)

ity of average deviations in (i) over 3 months, and

method to characterize this direction of rotation has no influence, the dis-

mounted on top and the me-

KUKA joint can introduce up to 0.5mm deviation.

chanical control system. In Maximum deviation between nominal and measFigure 1: Results for patient table isocentric rotations for a weight distribution of Fig. 2: Results forrotation patient table isocentric a -95 weight of 31.9 kg. The rotation range of 31.9 kg. The range of motion is fromrotations -95° to 95°.for 95 -> refers distribution to clockthe following we present a ured pitch and roll is 0.03˚at 151.2kg. While the to-95 95->°.9595 -> -95 refersclockwise to clockwise rotations and -95 -> 95 refers to counter clockwise motionwise is from -95°and rotations refers to counter rotations.