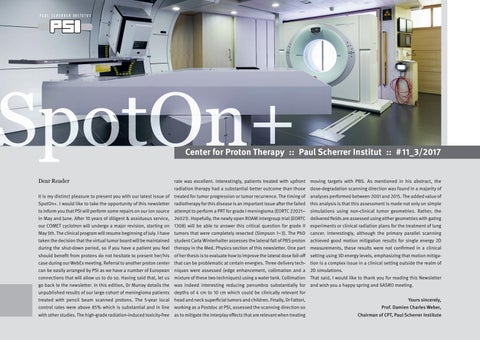 rate was excellent. Interestingly, patients treated with upfront moving targets with PBS. As mentioned in his abstract, the radiation therapy had a substantial better outcome than those

dose-degradation scanning direction was found in a majority of

It is my distinct pleasure to present you with our latest issue of treated for tumor progression or tumor recurrence. The timing of analyses performed between 2001 and 2015. The added value of SpotOn+. I would like to take the opportunity of this newsletter

attempt to perform a PRT for grade I meningioma (EORTC 22021–

in May and June. After 10 years of diligent & assiduous service,

our COMET cyclotron will undergo a major revision, starting on

May 5th. The clinical program will resume beginning of July. I have

tumors that were completely resected (Simpson 1–3). The PhD

taken the decision that the virtual tumor board will be maintained student Carla Winterhalter assesses the lateral fall of PBS proton achieved good motion mitigation results for single energy 2D during the shut-down period, so if you have a patient you feel therapy in the Med. Physics section of this newsletter. One part measurements, these results were not confirmed in a clinical should benefit from protons do not hesitate to present her/his of her thesis is to evaluate how to improve the lateral dose fall-off setting using 3D energy levels, emphasizing that motion mitigacase during our WebEx meeting. Referral to another proton center that can be problematic at certain energies. Three delivery tech-

can be easily arranged by PSI as we have a number of European niques were assessed (edge enhancement, collimation and a 2D simulations. connections that will allow us to do so. Having said that, let us mixture of these two techniques) using a water tank. Collimation go back to the newsletter. In this edition, Dr Murray details the

That said, I would like to thank you for reading this Newsletter

was indeed interesting reducing penumbra substantially for and wish you a happy spring and SASRO meeting.

treated with pencil beam scanned protons. The 5-year local head and neck superficial tumors and children. Finally, Dr Fattori, control rates were above 85% which is substantial and in line working as a Postdoc at PSI, assessed the scanning direction so with other studies. The high-grade radiation-induced toxicity-free

as to mitigate the interplay effects that are relevant when treating

Radio-Oncology News Local control of benign and non-benign intracranial meningiomas treated with pencil beam scanning proton therapy at PSI Accounting for approximately one-third was shown to be approximately 90%, beams (“spots”) can be individually of all primary brain tumors, meningi-

modulated to target a volume in three

omas are the most common intracranial Surgery, with the goal of gross total dimensions. This improves OARs spartumors in adults. Depending on the

histologic characteristics, the World treatment of choice for clinically symp-

distributions. In regards to this and

even though intracranial meningiomas

guishes benign (WHO I), atypical (WHO Radiation therapy (RT) is the most com-

are successfully being treated with reg-

ular photon irradiation all over the

meningiomas. This grading represents vant, or salvage therapy and has shown

56-year old patient treated for a right sided petro-clival meningioma, WHO grade II, with a total dose of 63 Gy(RBE).

an important prognostic factor for dis-

the capacity to reduce recurrence rates are especially tumors with complex (PTV) of 123.4 cm3 (max. 1142.0). All lowed by a watch and wait period.

ease recurrence and treatment re-

in all grades of disease. Escalated RT geometries and those which are in

due to the highly conformal and OARs was defined as radiologically observed The results demonstrate that PBSPT is sparing effect of PT.

to improved therapeutic ratios, yet Paul Scherrer Institute (PSI) has been total resection. these tumors often arise in close prox-

an effective and safe treatment modal-

imity to organs at risk (OARs; e.g. opti- than 20 years since 1996. In total, 96 over the entire follow up period (me- be considered especially for patients cal nerve, chiasm, cochlea, pituitary,

patients (male/female, 29/67; median dian: 32.4 months). This corresponds with non-benign tumors and/or for

those with incomplete resections.

Results have been presented as a

considered for this analysis. Fitting to

studies. Nine of the encountered fail- poster at the annual meeting of the

peak) with low entrance and virtually the indications for PBS PT mentioned ures (69%) were detected after treating American Society for Radiation Oncolno exit dose. Active spot scanning was above, all meningiomas treated at PSI pioneered at the PSI and has been

were complex and considered high risk a favorable impact on tumor control. In

employed clinically since 1996. Spot tumors. In addition, compared to other

For any further information,

studies, the average tumor volume was agnosis had a significantly better local please refer to CPT

rence or disease progression after hav-

small proton beams into the target. A

sharp lateral fall-off (penumbra) of the

The aim of radiation therapy is to de-

resulting dose distribution is of high

graphite block (pre-absorber) is in-

liver as much dose as possible to the

importance to spare organs at risk serted into the beam to lower the range 2a). Edge-enhanced collimation min-

tumour while minimising the dose to

located adjacent to the target. Three

of the incoming particles. Currently, if imizes the penumbra, reducing it by

the surrounding, healthy tissue. In

different techniques to improve the

proton pencil beam scanning, this is lateral fall-off are investigated, i.e., included in the field, the pre-absorber hancement alone. However, even with achieved using magnets to direct edge-enhancement, collimation and is used for all spots in this field. The this advanced collimation technique, edge-enhanced collimation.

effect on the lateral fall-off of replacing

no substantial improvement of pe-

this fixed pre-absorber with an auto-

numbra is gained from using the ap-

matic one, which is inserted for the low erture for ranges above 15 cm.

evaluated. Additionally, instead of in- airgap and for ranges above 4 cm, the only for depths of 4 cm to 10 cm.

getic, square fields have been simu-

serting a piece of material with a fixed penumbra is reduced by up to 2.7 mm

energy Bragg peaks only, has been Pre-absorber strategies: For a 10 cm

lated in a water phantom using the thickness, using a variable pre-ab-

for the automatic compared to the with a combination of collimation,

TOPAS 3.0.p1 Monte Carlo tool. For sorber consisting of eight mini range fixed pre-absorber approach (figure edge-enhancement and a variable edge-enhancement, the weights of the shifter plates and inserting only the beams are optimized to achieve a

variable pre-absorber (figure 2b). For This work was supported by the re-

hardware is needed (figure 1a). In con-

tion techniques have been combined all strategies, it is best to place the

trast, for collimation, a physical aper-

with collimation, edge enhancement pre-absorber downstream of the col-

ture is inserted to cut the field-edge

limator and to keep the airgap as small results will be presented at the 56th as technically possible.

2a). For ranges below 4 cm, it could be pre-absorber, which is positioned

necessary amount of material has been reduced by up to 2.0 mm assuming a downstream of the collimator.

of May in Yokohama, Japan.

For any further information,

and the weights of the collimated pen-

sorber and the water tank, collimation tion techniques to improve the lateral please refer to CPT,

the lowest deliverable energy is 70 MeV,

pared to edge-enhancement only for

ning have been analysed. For the clin-

corresponding to a 4 cm proton range

ranges between 4 cm and 10 cm (figure

The role of scanning direction for the mitigation

tient-specific breathing curves and sinusoidal trajectories with amplitudes of up to 20 mm.

tribution of proton beams for the delivery of deed well reported in the literature, with 12 out An exemplary excerpt of dose distributions measconformal radiotherapy treatments even in most of 14 papers published between 2001 and 2015,

challenging situations. However, the physiolog-

mentioning a direction-dependence (Figure 1). In is reported in Figure 2. The transversal dose at

ical deformation of patient’s anatomy, due to

published material, this scanning effect is how-

respiratory organ motion, can interplay with the

ever mostly supported by simulations, or by ex-

shown in panel (a) was acquired during a gating

periments using simple geometries which may experiment, with the dosimeter in sinusoidal

tally affect the quality of treatments for tumours not represent a realistic clinical scenario. To motion and a gating window size of 4 mm. The

Figure 2: measured dose distributions scanning under similar experimental settings for single energy layer (a), spherical target (b) and patient field (c). γ-scores calculated at 3%/3mm for all pixels above 5% of prescribed dose.

For any further information, please refer to CPT,

located in the thorax or abdomen. Motion miti-

clarify this controversy, we have analysed multiple

result for a spherical target (2 Gy) in presence of Dr. Giovanni Fattori

gation techniques are therefore applied in such

cases to dilute dose distortions by gating, res- imental evidence for the mitigating effect of conditions is shown in Figure 2b, whereas the giovanni.fattori@psi.ch canning or tracking the radiation beam. The

is enabled by PBS, however, opens up to further

options to manage the motion interference by, form mounted dosimeter. The sequence of spot tended to confirm that if the primary scanning is for instance, optimizing the scanning path and positions defined by the treatment plans was parallel to the motion, a large mitigation of the direction.

edited to verify the dosimetry for the two most interplay effect can be achieved (Figure 2a). This extreme cases of having the fastest scanning di- was however not confirmed for more realistic rection either parallel or orthogonal to the dosim-

eter’s motion. Dose distributions were measured where the interplay among energy layers (Figat mid spread out Bragg peak position with a CCD

ure-2b) and the use of highly modulated patient

system and ionization chamber array, and com- fields (Figure-2c) generally annihilate the scanpared to the static reference irradiations using the ning direction effect. gamma criterion (3%/3mm). In our collection, the

The research leading to these results has received

for a variety of motion models, including pa-

for the treatment of lung cancer. Optical tracking

was applied for motion-synchronized beam deliv-

work will be presented at the 56th annual confer(PTCOG) mid of May in Yokohama, Japan.