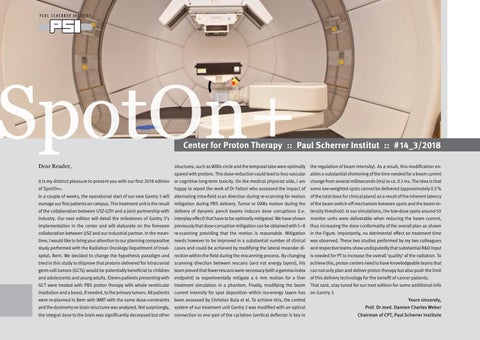 structures, such as Willis circle and the temporal lobe were optimally the regulation of beam intensity). As a result, this modification enspared with protons. This dose-reduction could lead to less vascular ables a substantial shortening of the time needed for a beam current

or cognitive long-term toxicity. On the medical physicist side, I am change from several milliseconds (ms) to ca. 0.1 ms. The idea is that

happy to report the work of Dr Fattori who assessed the impact of some low-weighted spots cannot be delivered (approximately 0.5%

In a couple of weeks, the operational start of our new Gantry 3 will alternating intra-field scan direction during re-scanning for motion of the total dose for clinical plans) as a result of the inherent latency manage our first patients on campus. This treatment unit is the result mitigation during PBS delivery. Tumor or OARs motion during the of the beam switch-off mechanism between spots and the beam-inof the collaboration between USZ-UZH and a joint partnership with delivery of dynamic pencil beams induces dose corruptions (i.e.

tensity threshold. In our simulations, the low-dose spots around 50

industry. Our next edition will detail the milestones of Gantry 3’s interplay effect) that have to be optimally mitigated. We have shown

monitor units were deliverable when reducing the beam current,

implementation in the center and will elaborate on the foreseen

previously that dose-corruption mitigation can be obtained with 5–8

thus increasing the dose conformality of the overall plan as shown

collaboration between USZ and our industrial partner. In the mean-

re-scanning providing that the motion is reasonable. Mitigation in the Figure. Importantly, no detrimental effect on treatment time

time, I would like to bring your attention to our planning comparative needs however to be improved in a substantial number of clinical was observed. These two studies performed by my two colleagues study performed with the Radiation Oncology Department of Insel-

spital, Bern. We decided to change the hypothesis paradigm and rection within the field during the rescanning process. By changing is needed for PT to increase the overall ‘quality’ of the radiation. To tried in this study to disprove that protons delivered for intracranial scanning direction between rescans (and not energy layers), his achieve this, proton centers need to have knowledgeable teams that germ-cell tumors (GCTs) would be potentially beneficial to children

and adolescents and young adults. Eleven patients presenting with endpoint) to experimentally mitigate a 6 mm motion for a liver of this delivery technology for the benefit of cancer patients. That said, stay tuned for our next edition for some additional info

GCT were treated with PBS proton therapy with whole ventricular

treatment simulation in a phantom. Finally, modifying the beam

irradiation and a boost, if needed, to the primary tumors. All patients

current intensity for spot deposition within iso-energy layers has on Gantry 3.

were re-planned in Bern with IMRT with the same dose-constraints been assessed by Christian Bula et al. To achieve this, the control

and the dosimetry on brain structures was analyzed. Not surprisingly, system of our treatment unit Gantry 2 was modified with an optical

the integral dose to the brain was significantly decreased but other

Germinomas are one of the most radio­

(WV-RT/TB) is recommended for local-

ble by radiotherapy alone, with an brain areas are mainly in direct vicinity

geneous group of predominantly mid- overall survival exceeding 90% at 10 of the target volume, it is unknown if line, mainly pineal (56%) and/or supra­

spares these organs at risk (OAR).

Incidence varies substantially across nosis makes it imperative that the risk study of WV-RT/TB was conducted to the continents, accounting for 2–4%,

of long-term treatment-related side assess whether protons or modern cient (IC)), critical neurocognition

tumors in individuals aged 0–19 years mum by better sparing of normal tis- critical organ sparing. in Europe, other western countries and sue, specially taking into account that in the USA, respectively; whereas in

pediatric patients seem to be more

cal sequelae, as well as the risk of Target volume coverage was similar for radio-induced secondary malignan-

both modalities. Compared to IMRT,

Asia they constitute between 8% and sensitive to radiation than adults.

18% of all pediatric CNS tumors, indi-

cating that both genetic and environ- As surrogate for neurotoxicity (vascu- with pencil beam scanning proton (Dmax), mean (Dmean) and integral tion between Inselspital Bern and PSI mental factors play vital roles in the

therapy (PBS-PT). Additional critical dose (ID) of the normal brain (2.6 %, by a resident staying one year at PSI.

development of this disease. In general,

white matter necrosis, damage to the

The results will be presented at the

they comprise about 1% of all primary neuron stem cell compartment, limbic been delineated (brain, supra-/ in-

children. They are most common in the

second decade of life, with a peak inci-

besides the brainstem, pituitary, chi-

ference was observed for the beam scanned protons vs. photons).

3–5 to 1. The World Health Organization

a radiation technique that has the

has classified intracranial GCT into ger-

poral lobes). Respective intensiplans were generated for these pa-

tients, and plans were compared for

followed by a boost to the tumor bed index (HI) and inhomogeneity coeffi- ing, while keeping target volume cov-

Moderate organ motion can be miti- This concept, shown in Figure 1 for the

cision treatments. Target coverage is to average dose distortions due to

to layered rescanning as well, as it

progressively built up patching to- interplay. However, unsought posi-

does not require specific modification

gether the contributions from thou-

in the treatment unit, but rather a re-

tional and temporal correlations be-

while meandering through the target namics of rescanning may arise,

laterally and in depth, using energy undermining its efficacy. This effect is The motion mitigation capability of random amplitude and breathing flucFigure 1: The concept of alternate field scan directions at a glance.

modulation. Being inherently sequen- possibly emphasised by the fixed me- alternating intra-field scan directions tial, PBS is particularly vulnerable to

intra-fractional organ motion, due to beam deflection in one direction at a distortions of spots range and geomet-

Figure 1: The concept of alternate tuations however,from agreement Row-wise we follow the treatment progression, highestwas to comfield scan lower directions at a glance. energy, according to volumetric rescanning regime. promised for all scenarios, but was still Row-wise we follow the treatment consistently higher for the EE and ER progression, from highest to scenarios (87.2%/95.7% pass rates for lower energy, according to volumetric 8x) than conventional rescanning (best rescanning regime.

time, to cover each energy layer with chamber array. The detector was moved

ric misalignment during the progres- consecutive segments of dose spots to replicate a cranio-caudal target dission of the treatment. Patientsâ&#x20AC;&#x2122; breath-

line by line. Here we investigate the placement (ca. 6 mm) of a liver carci-

for dose homogeneity, as the beam

tions in amplitude and period, simu-

tions during re-scanning can further

anatomy and soft tissues, generating mitigation due to rescanning. Alterna-

along or crosswise to the motion, or to

This study will be presented at the 57th

formed by either switching the primary between each rescan (ER). In addition, Results from central plane measure-

annual conference of the particle ther-

energy layer or between each rescan.

place on May 21st in Cincinnati, United

Table 1: Gamma score 1%/1mm for a liver cancer patient. The beam scanning direction is referred to the target motion as along (//), crosswise (_Đ&#x2020; ) and alternate Every Energy layer (EE) or Every Rescans (ER).

processed to include random fluctua- strate that, to achieve a high gamma 4x rescan

Table 1: Gamma score 1%/1mm for a liver cancer patient. The beam scanning direction is referred to the target motion as along (//), crosswise (^) and alternate Every Energy layer (EE) or Every

Figure 2: Relative difference of delivered and nominal dose per voxel for a head patient’s field. On the left, the beam current is constant within an iso-energy layer (static mode), while on the right the current is reduced for low-dose spots (dynamic mode).

scanning applies the dose on a three-dimensional grid in the target volume, with one dimension defined by the proton energy. While the spot dose may vary substantially within an

To overcome this limitation, we enhanced the

low-dose spots dynamically. Figure 1 shows the This work will be presented at the 57th annual

iso-energy layer, the beam current typically re- control system of our PSI Gantry 2 by an optical effect of this advanced operation mode on the mains constant. In this static operation mode,

communication link to the vertical deflector, a

around 50 monitor units (Figure-1a, left side)

become only deliverable when reducing the

mechanism results in a lower limit for the deliv-

conference of the particle therapy co-operative

delivery of a clinical field. The low-dose spots group (PTCOG) mid of May in Cincinnati, USA. For any further information, please refer to CPT

In a detailed analysis of 9 clinical fields, we

possibility to adjust the current for individual dose) were skipped in the static operation mode, while the dynamic mode allowed delivering all Figure 1: Dose per spot (left) and corresponding beam current (right) for a clinical field consisting of two patches. The blue dots represent spots delivered in both modes (static and dynamic), while the red dots show the low dose spots only deliverable in the dynamic mode with an associated beam current adjustment as shown in (b).

spots. No adverse effect on the treatment time was observed. The accuracy of the delivered dose compared to the planned distribution was generally improved, as illustrated in figure 2 for one of the clinical fields analyzed. In this example, the maximum missing dose per voxel could be lowered from 2.3% to 1.3%. The method was successfully commissioned and is in clinical operation since fall 2017.

high-intensity deliveries, where the number of

low-weighted spots is even more pronounced.

We consider dynamic beam current control to be a valuable contribution to cyclotron-based spot scanning technology, especially in the context of new modalities such as rescanning and