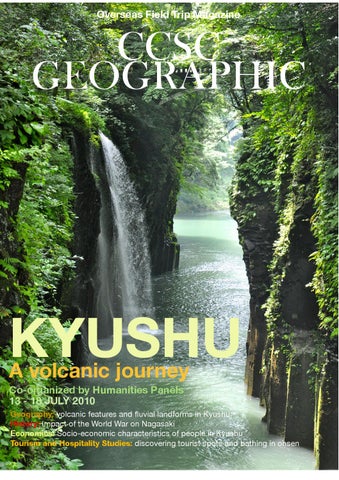 Objectives*of*the*trip By visiting overseas countries, we can learn from various aspects and broaden our horizons. This field trip to Kyushu stimulates studentâ&#x20AC;&#x2122;s thinking and obtains knowledge on Geography, History, Economics and Tourism and Hospitality Studies outside textbooks from first-hand discoveries. Kyushu is the third largest island in Japan, which is one of the most developed regions and is located at the southernmost of the four main islands. Fukuoka and Kitakyushu are the largest cities in Kyushu, where many well-known sites, famous food and natural features can be found.

Fukuoka (福岡): It is a major city of Kyushu and has been used as a habour city for centuries. There are many modern attractions that are worth visiting. Nakasu Night (中州不夜天): After we had arrived in Kyushu on 13th July, we went to Fukuoka (福岡). As it was already at night, we went to the night market at Hakata (博多). In Fukuoka, there are some open air food stands called Yatai and it is one of the scenic spots in Japan. Most of them serve Ramen noodles and grilled food from 6 p.m. to 2 a.m. “Oi shi!”

Day Two(14/7/2010) Nagasaki (長崎): It was the second city being destroyed by the atomic bomb dropped during the Second World War. Nagasaki plays an important role in foreign trading and acts as the main port city in Kyushu. Nagasaki Peace Park (平和公 園): As to commemorate the serious destruction and the dreadful history made by the explosion of the atomic bomb on 9th August, 1945, Nagasaki Peace Park was built to pray for peace. There is a tall Peace Statue in the park and a black pillar marking the epicenter of atomic explosion. Seeing the remains of the World War II, we all felt very touching and regretted for the substantial casualties. All these convinced us to keep the world in peace.

Nagasaki Atomic Bomb Museum (原爆資料館): This museum was built to remember the details of the atomic explosion at Nagasaki. It was opened in April 1996 and introduces the history of nuclear weapons. It displays numerous photographs, remains and documents about this gloomy memorable day, revealing the truth of the history. Mt. Unzen (雲仙地獄谷): Mt. Unzen is an active volcano group of eight peaks. The highest one is Fugendake, standing near the middle of Shimabara Peninsula. Hot springs are formed at the foot part of the mountain. Because of the continuous smog everywhere, just like being in the hell, it is called Unzen Jigoku (Unzen hell). In addition, the smelling of sulphur dioxide gas also choked us a lot.

DAY T H R E E ( 1 5 / 7 / 2 0 1 0 ) Debris Flow Destroyed Houses Memorial Park (土石流保存公園): Mt Unzen is an active volcano and in 1990, a serious volcanic eruption occurred. There were weighty casualties and the debris flow even nearly demolished the whole village. This park was built to prevail people the importance of relief measures and evacuation planning.

Kumamoto Castle (熊本城): Kumamoto castle is a significant scenic spot in Kyushu as it is one of the most impressive castles in Japan. It was built in 1601 by Kiyomasa Kato. The design of the castle is so beautiful and ancient. Although most of the monuments were burnt because of war, the Uto Turret survived and new buildings were still being added. It is a brilliant construction and new experience for us.

Not far from the Mt. Aso-san, Kusa-senri plateau is a grass covered plain. It was supposed to be the place for grazing cows and horses. Unluckily, we hardly saw anything in the plateau when we arrived and only took a few photos and departed.

It is the place where most of our beautiful scenic photos were taken during this field trip. Besides, we all gain fruitful knowledge on geography under the professional guidance of Mr. P Lui and Mr. Tsang. The Takachiho Gorge is spectacular with the nearly sheer cliffs of slow forming volcanic basalt columns cut by the Gokase River. We walked along a paved pathway through beautiful trees, offering lovely views of the Gorge along the 1 km walk which eventually brought us into the view of the 17 m high Minainotaki waterfall.

Our tourist bus only went as far as Aso-San Nishi Station, from where it is a short ropeway ride to the crater. Mt. Aso San is the largest active volcano in the world, which stands in Aso Kuju National Park in Kumamoto. Its peak is 1592 m above the sea level. It also has one of the largest calderas in the world, in which the circumference is around 120km. Note that the crater area is sometimes completely closed off to visitors due to the release of poisonous volcanic gases. Although the weather was rainy and windy, Aso-san still partially opened on that day fortunately. Nevertheless, the sulphur dioxide gas was extremely intense in the opened area. In addition, Kome Zuka (rice mound) lies in the vast Aso caldera. The small, beautifully shaped volcanic cone was generally regarded to be the funniest sight throughout the day.

Yanagawa in the southwestern part of Fukuoka lies on the rural area near the mouth of the Chikugo-gawa River that empties into the Sea of Ariake. It was another charming spot in this journey. A cruise on a poled boat called "Donko" down the river was the chief attraction of this old castle town. The cruise took about 30 minutes. The boatman, masterly using his pole, addressed us from time to time by briefly explaining popular sightseeing spots on the way. He even sang folk songs to entertain us. Seasonal flowers and the Japanese-style storehouses also pleased all of our eyes.

Among the hundreds of Tenmangu Shrines in Japan, Dazaifu's is the most important one. Tenmangu Shrines are dedicated to the spirit of Sugawara Michizane, who was a scholar and politician of the Heian Period. The entire street before entering Dazaifu is lined with shops that cater to all of us since we had to buy souvenirs. After crossing two arched bridges, which represent the past, present and future, we approached a walled courtyard with the shrine's main hall, where a wide range of good luck charms could be purchased. Most of us bought several education related charms which are supposed to help students to get satisfactory results

All good things come to an end. Why lighthearted journeys always end so quickly? Itâ&#x20AC;&#x2122;s time for us to say goodbye to Kyushu. We departed in the morning and changed flights at Taiwan. At about 3pm, we eventually arrived in our homelandâ&#x2C6;&#x2019;Hong Kong!

Conclusion: In a nutshell, this is an extraordinary field trip since it is indeed a golden opportunity for us to widen our view. Furthermore, the journey to Kyushu is the farthest trip that our school has successfully organized till now and it proved worthwhile to arrange more for students in the future. Looking at this plentiful itinerary, do you feel excited? If yes, flip over and read more! 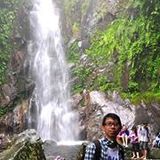 The first part of the magazine.

The first part of the magazine.