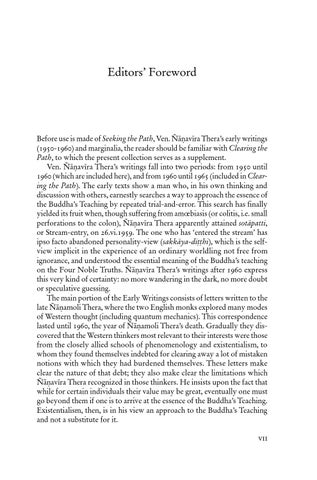 Before use is made of Seeking the Path, Ven. Ñå~av⁄ra Thera’s early writings (1950-1960) and marginalia, the reader should be familiar with Clearing the Path, to which the present collection serves as a supplement. Ven. Ñå~av⁄ra Thera’s writings fall into two periods: from 1950 until 1960 (which are included here), and from 1960 until 1965 (included in Clearing the Path). The early texts show a man who, in his own thinking and discussion with others, earnestly searches a way to approach the essence of the Buddha’s Teaching by repeated trial-and-error. This search has finally yielded its fruit when, though suffering from amœbiasis (or colitis, i.e. small perforations to the colon), Ñå~av⁄ra Thera apparently attained sotåpatti, or Stream-entry, on 26.vi.1959. The one who has ‘entered the stream’ has ipso facto abandoned personality-view (sakkåya-di††hi), which is the selfview implicit in the experience of an ordinary worldling not free from ignorance, and understood the essential meaning of the Buddha’s teaching on the Four Noble Truths. Ñå~av⁄ra Thera’s writings after 1960 express this very kind of certainty: no more wandering in the dark, no more doubt or speculative guessing. The main portion of the Early Writings consists of letters written to the late Ñå~amoli Thera, where the two English monks explored many modes of Western thought (including quantum mechanics). This correspondence lasted until 1960, the year of Ñå~amoli Thera’s death. Gradually they discovered that the Western thinkers most relevant to their interests were those from the closely allied schools of phenomenology and existentialism, to whom they found themselves indebted for clearing away a lot of mistaken notions with which they had burdened themselves. These letters make clear the nature of that debt; they also make clear the limitations which Ñå~av⁄ra Thera recognized in those thinkers. He insists upon the fact that while for certain individuals their value may be great, eventually one must go beyond them if one is to arrive at the essence of the Buddha’s Teaching. Existentialism, then, is in his view an approach to the Buddha’s Teaching and not a substitute for it.