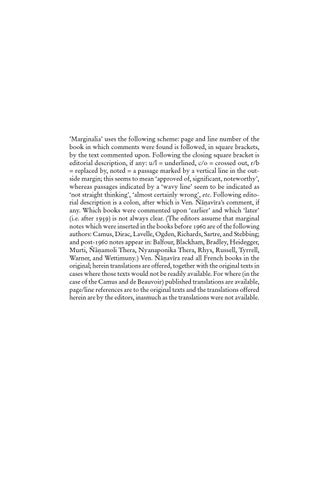 ‘Marginalia’ uses the following scheme: page and line number of the book in which comments were found is followed, in square brackets, by the text commented upon. Following the closing square bracket is editorial description, if any: u/l = underlined, c/o = crossed out, r/b = replaced by, noted = a passage marked by a vertical line in the outside margin; this seems to mean ‘approved of, significant, noteworthy’, whereas passages indicated by a ‘wavy line’ seem to be indicated as ‘not straight thinking’, ‘almost certainly wrong’, etc. Following editorial description is a colon, after which is Ven. Ñå~av⁄ra’s comment, if any. Which books were commented upon ‘earlier’ and which ‘later’ (i.e. after 1959) is not always clear. (The editors assume that marginal notes which were inserted in the books before 1960 are of the following authors: Camus, Dirac, Lavelle, Ogden, Richards, Sartre, and Stebbing; and post-1960 notes appear in: Balfour, Blackham, Bradley, Heidegger, Murti, Ñå~amoli Thera, Nyanaponika Thera, Rhys, Russell, Tyrrell, Warner, and Wettimuny.) Ven. Ñå~av⁄ra read all French books in the original; herein translations are offered, together with the original texts in cases where those texts would not be readily available. For where (in the case of the Camus and de Beauvoir) published translations are available, page/line references are to the original texts and the translations offered herein are by the editors, inasmuch as the translations were not available.

Part B includes two early essays (Nibbana and Anatta and Sketch for a Proof of Rebirth) as well as notes from a Commonplace Book and Margina...

Part B includes two early essays (Nibbana and Anatta and Sketch for a Proof of Rebirth) as well as notes from a Commonplace Book and Margina...